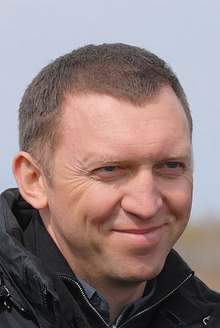 
Oleg Deripaska was born on January 2, 1968, in the city of Dzerzhinsk in the region of Nizhniy Novgorod. He spent two years in the Russian army between March 1986 and March 1988, serving in the strategic rocket forces. He rose through the ranks to become a staff sergeant.

Deripaska graduated from Lomonosov Moscow State University in 1993, where he studied physics. In 1996 he gained a qualification from the Plekhanov Russian Academy of Economics. Those who studied with Deripaska remember him as an active young man, always looking for opportunities to make money. He was a natural entrepreneur. He made his first business deals long before his graduation in 1993.


In 1992, Oleg Deripaska headed Rosaluminproduct, a metals firm that later became a closed joint-stock company, renamed Aluminproduct. After leaving college, Deripaska started his own metals business. He spent all his profit buying shares in the Sayanogorsk Aluminum Smelter in the Republic of Khakassia.

He headed the plant in 1994, at the age of only 26. In 1997, Deripaska started the Sibirsky Aluminum Group based on the Sayanogorsk smelting plant. The company was the forerunner of the Basic Element investment holding. The group consolidated its position in the alluminium business through acquisitions and producing a vast range of goods. 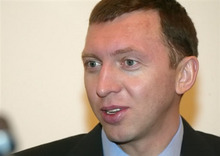 In 1998, the Sayanogorsk smelter was ranked among Russia's top 20 companies. In 2007, Sibirsky Aluminum became one of the world's top 10 aluminium producers. In 1999, Deripaska was awarded the Order of Friendship by Boris Yeltsin, the Russian President at the time.

The basics of the aluminium business


In 2000, 32-year-old Deripaska became a general director of Russian Aluminium (RUSAL). The entity was set up as an amalgamation of several smelters and refineries – and the Russian oil company Sibneft.

In 2007 RUSAL, SUAL (one of the world's leading aluminium producers), and Glencore International joined forces to create United Company RUSAL. UC RUSAL has become the world's largest producer of aluminium and alumina. Oleg Deripaska is a member of the boards of directors of UC RUSAL. In April 2008, UC RUSAL bought a blocking share of 25% plus one stake in the MMC Norilsk Nickel. Deripaska bought the stock from the tycoon Mikhail Prohorov – also listed in Forbes global ranking of billionaires.

Deripaska is the chairman of the supervisory board of Basic Element – a diversified investment company with more than 300,000 employees in Russia and abroad. The company has assets in energy resources, manufacturing, finance, insurance, construction and aviation. Deripaska's Basic Element has assets worth more than $US 23 billion. 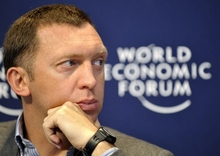 Oleg Deripaska holds several advisory positions in Russian business bodies. He is a vice president of the Russian Union of Industrialists and Entrepreneurs. He's chairman of the executive Board of the Russian National Committee of the International Chamber of Commerce. He is also a part of the Competitiveness and Entrepreneurship Council – a government agency.

In addition, he holds a number of cultural and educational positions. He is a member of the Board of Trustees of the Bolshoi Theatre, the Russian Science Foundation, the Moscow School of Economics at the Lomonosov Moscow State University, as well as of the business school at the St.Petersburg State University.

He has represented Russia in the Asia-Pacific Economic Cooperation Forum since 2004.


Journalists outside Russia describe him as a friend of the Prime Minister and former president Vladimir Putin. He is said to have nearly always accompanied Putin on his visits to Central Asia.

Deripaska has been named manager of the year several times by the Russian media. Deripaska has told the press that his hobby is the “consumption of information in a concentrated form” (internet, books).

The Demidov dynasty The Demidov family was a dynasty of Russian industrialists who developed the Ural region, setting up iron foundries and arms factories.