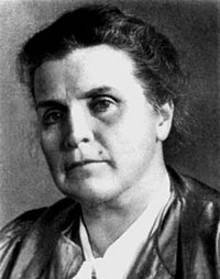 Mukhina is arguably the most notable Russian sculptor of the 20th century. She is the creator of the legendary monument Worker and Peasant woman. The 24-and-a-half-meter sculpture became the iconic monument of the Soviet period.

Vera Mukhina was born in Riga to a loving family. Her father owned a bakery and some real estate in town. The wealthy merchant family members were very surprised when the youngest daughter showed interest in drawing. Vera soon became very inspired by this art and her father Ignat finally gave her his blessing. “Well, God didn’t give me a son and I was dreaming you'd follow in my steps in business. But stubborn as I am, you'll probably be a prominent artist.” By that time he was already a widower. His wife Nadezhda was good at singing, composing poems and drawing, mostly for her daughters. Vera was eleven months when her mother died of tuberculosis.

Concerned about his daughters’ health, Ignat moved to Feodosia in the Crimea. They spent all their childhood by the sea. The father also died early, when the girls just finished high school. Their two uncles took care of the two sisters and soon moved to Moscow. Vera entered the drawing school of famous painter and teacher Konstantin Yuon. Besides drawing lessons she also took lessons in sculpture and dreamed of going to Paris. Her uncle, however, didn’t share her desire at all.

Once she seriously hurt herself falling off a sleigh. She broke her nose and the local doctors only made things worse trying to patch her up. Her relatives therefore were forced to send her to Paris to receive proper treatment. Mukhina courageously underwent several nips and tucks, but it forever changed her personality: she became prickly and short-tempered.

However, Vera benefited from her trip as much as she could. She became one of the best students of sculptor Emil Bourdelle, the student of great Rodin. When she took short breaks from studies at the Art Academy, she toured Paris visiting all the museums she could come across. Vera returned to Russia in 1914, during WWI, and worked as a nurse for three years, having totally given up art. 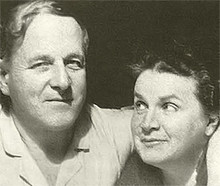 While working as a nurse, she met her future husband Aleksey Zamkov. He was sick with typhus, and she had to take care of him. They fell in love and were married four years later. Aleksey was a very good surgeon and a prominent specialist in endocrinology. By the early 1930s her life was more-or-less stable. She worked and taught at the Art Academy, creating sculpture projects of her famous Revolution, Peasant Woman and some known portraits of famous people, among them ballerina Semyonova and many others.

Meanwhile the scientific work of her husband was thwarted; he was persecuted and the couple decided to go abroad. In Kharkov they were removed from the train and brought back to Moscow. In three months the couple and their son Vsevolod were forced to move to Voronezh. It was, however, time Vera took to go on with her work.

In 1936 the Soviet Union was preparing for the World Exhibition in Paris, which was to be held there the following year. Architect Iofan, responsible for the design and construction of the Soviet exhibition hall, suggested it be decorated by a tall sculpture with the Soviet national emblem – the hammer and sickle. Mukhina's project won in the contest so she had to prepare a 25-meter-long and 75-ton copy of it to place on top of the building. The sculpture was so big it had to be cut into almost a hundred pieces. Today a replica of it (the original was damaged while transported back from Paris) is placed in front of the Russian Exhibition Center.

The sculpture was removed for restoration in the autumn of 2003 and its return was further deferred until November 28, 2009. The restored statue uses a new pavilion as its pedestal, increasing its total height from 34.5 meters (old pedestal was 10 meters tall) to 60 meters. The new pavilion is 34.5 meters tall plus 24.5 meters of the statue’s own height. In cinema, Worker and Peasant Woman was chosen in 1947 to serve as the logo for the film studio Mosfilm.

The inexhaustible energy which helped Mukhina use her talent in all areas of her art, including managerial abilities, defined her creative work through her whole life. She was also good at 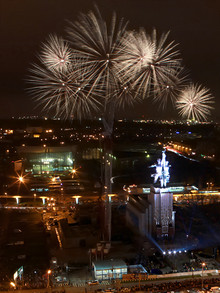 teaching and devoted much of her time to her students. The harsh, repressive year of 1938 left her husband without his research laboratory and once again he found himself under pressure. In 1942 he died. Mukhina was heartbroken.

Mukhina’s works of the period leading up to the Great Patriotic War of 1941–1945 included a monument to Maksim Gorky, permeated with the revolutionary and romantic spirit of the writer’s early works. After the war, Mukhina again took up monumental sculpture. Seeking to enrich the artistic vocabulary of Soviet art, Mukhina often presented her theories on sculpture, experimented with new materials, and developed a technique of polychromatic sculpture. She decorated exhibitions, made industrial drawings, and designed clothes, textiles, porcelain and theatrical costumes for the Vakhtangov Theater in Moscow. Mukhina was among the initiators of the movement to improve Soviet artistic glassware and worked in this field from 1938 to 1953.

She died at 64 and was buried with her husband on Novodevichy Cemetery in Moscow. On the tomb’s stone there are the words of Mukhina’s husband “I did all I could for people” and under these words the words of Vera Mukhina “I did too”.

Ilya Glazunov Ilya Glazunov is a Soviet and Russian artist known for his historical and religious paintings. His art is controversial, but still catches the attention of critics and admirers.