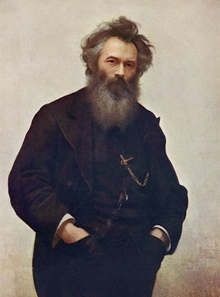 “Russia - country of landscapes… I hope the time will come, when all Russian nature, alive and penetrated by spirit, will look from canvases of Russian artists…” - Shishkin

Ivan Shishkin started drawing as a child and continued through his life; he is said to have never parted from his pencil. Drawing was a way to study the nature. By his contemporaries, Shishkin was given the nicknames “Titan of the Russian Forest,” “Forest Tsar,” “Old Pine Tree” and “Lonely Oak,” as there was no one at that time who depicted trees more realistically, honestly and with greater love.

“Shishkin - national artist. All his life he studied Russian, mainly the northern woods, Russian trees and Russian thickets. It is his empire, and here he has no contenders, he is unique.” - Stasov

It was Russia and chiefly her native forests that became the enduring focus of his long, successful and prodigious career. Shishkin's works were greeted as the defining images of Russia that promoted a new pride in the indigenous landscape. Before Shishkin no one had narrated the love of his native town and the soft beauty of the northern nature. 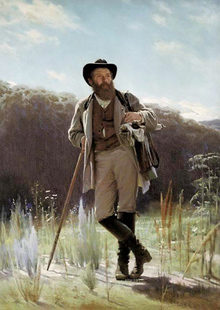 The works of this outstanding artist enjoy vast popularity in Russia and all over the world and have become classics of Russian landscape painting. During the 40 years of his artistic activity Ivan Shishkin produced hundreds of paintings, thousands of studies and drawings and a large number of engravings.
This is a prime example of Shishkin's exceptional talent, which the artist Ivan Kramskoy, the Itinerants' ideological mentor, noted was of such magnitude that it constituted an historical art phenomenon: “He is by himself a school... a milestone in the evolution of the Russian landscape.”

Ivan Shishkin was born in the small provincial town of Yelabuga (today the Republic of Tatarstan). His father, a merchant, but a very broad-minded person, was a great lover of antiquity and an amateur archaeologist and folklorist. In an effort to foster his son’s interest in history he took little Shishkin to the archeological excavations of the ancient Bulgarian kingdom on the Volga, where he was helping Professor Nevostruyev from Moscow.
In 1844 Shishkin was sent to the Kazan grammar school, where he soon found friends with whom he could draw and discuss art. Shishkin studied the natural sciences with great seriousness. The set-up of the grammar school, however, was an obstacle to his aspirations and intentions and after the summer holidays of 1848 Shishkin did not return to the school. Shishkin’s autobiography gives some idea of his activities as a young man, having freed himself from the “grammar school with its narrow-minded formalism.” As he put it, “so that I would not become a clerk.”

Shishkin received a good grounding in painting and sculpture under the guidance of Mokritsky in the Moscow School of Painting and Sculpture. The Artist constantly drew in the woods that were situated near Moscow (in Sokolniki). “A landscape-painter is a perfect artist. He feels more deeply, purer,” Shishkin wrote in his diary.

From 1856 to 1860 Shishkin studied at the St. Petersburg Academy of Arts under Vorobiov. The young artist’s successes, which earned him gold and silver medals, upheld the hopes expressed by his former tutor Mokritsky when Shishkin entered the Academy: “We have lost an excellent, talented pupil, but we can expect, with time, to see him turn into an excellent artist if he continues to study with the same love at the Academy.”

Shishkin’s aspiration for a portrait-like quality in the representation of nature was already in evidence in the early painting “View of the Environs of St. Petersburg” in l856. In 1858-59 Shishkin often went to the island of Valaam, where he took practical summer courses. The majestic scenery there reminded the young artist of the natural beauty of the Urals area, where he had spent his childhood. In 1860, for two of his Valaam landscape paintings, Shishkin received a first-class gold medal and the right to go abroad. Shishkin was in no hurry to leave, however, and in the spring of 1861 he went to Yelabuga, where he did a good deal of painting in the countryside.

Shishkin finally went abroad in 1862. Berlin and Dresden left him cold. All he felt was homesickness (“why am I not in Russia, that I love so?”). Shishkin came to life, however, in Prague. The artist was impressed by the drawings of “Slavonic types” by the great Czech realist of the 1860s, Joseph Manes. In 1863 in Zurich Shishkin visited the studio of the painter and engraver Sir Robert Collier, where he learned about the technique of etching. Later he became a master of lithography and etching. The mountain scenes of Switzerland were new ground for the artist, and he produced dozens of sketches.

In 1865 Shishkin returned to Russia and received the title of academician for the painting “View in the Environs of Düsseldorf.” Shishkin quickly slipped into the capital’s artistic circles and attended the Thursday meetings of the Artists’ Artel. He was “the loudest of all,” recalled Repin.
Shishkin’s paintings “Tree-Felling” (1867), “At Sunset” (1869) and “Midday in the Outskirts of Moscow” (1869), which reveal the distinctive beauty of the Russian landscape, foreshadowed the direction later developed by the Society of Itinerants.

In 1870 Shishkin was one of the founding members of the Society, together with Kramskoy, Perov, Savrasov, Ghe and others. Ivan Kramskoy, who rated Shishkin’s art very highly and helped him, wrote the following about Shishkin’s merits: “Shishkin simply amazes us with his knowledge... And when he has the landscape before him it’s as if he is in his element; immediately he is bold and agile and does not need to think about how, what or why... I think he is the only one among us who knows nature in a scholarly way... Shishkin is a milepost in the development of Russian landscape-painting; he is a whole school in one man.” 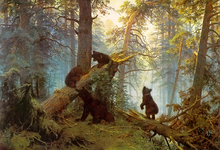 Shishkin agreed with the progressive, contemporary and national imagery propounded by the Itinerants, at odds with the artificiality and moribund nature of academic art. Critics called one of his first masterpieces, “Noon in the Neighborhood of Moscow” (1869), a “song of joy.” He always preferred to draw daytime scenes, full of sunlight and life as seen in “Pine Forest in Viatka Province” (1872), “Rye” (1878), “Path in a Forest” (1880), “Oaks” (1887) and “Coniferous Forest” and “Sunny Day”(1895).

At the Second Exhibition of the Itinerants, Shishkin presented the painting “In the Backwoods,” for which, in 1873, he received the title of professor. Shishkin subsequently exhibited with the Itinerants for the rest of his life. 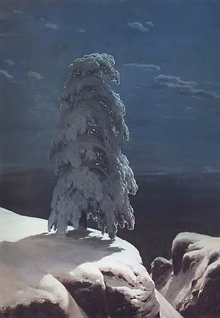 Apart from painting, Shishkin was also a master of drawing and engraving. His drawing went through the same evolution as his painting. Those of the eighties, which were executed in charcoal and chalk, are much more expressive than the pen-drawings of the sixties. In 1891, more than 600 etudes and etchings were exhibited at the Academy. The exhibition gave a good idea of the scope of the artist who was deeply aware of and sought to express the beauty and heroic power of the Russian countryside.

Shishkin’s career culminated in the grand composition “Grove of Ship Timber” in 1898, in which the artist’s experience and mastery expressed the indelible impressions of his childhood. The painting was completed not long before the artist’s death. It depicts the Afonasov grove of ship-building timber near Yelabuga. It is his very last painting, devoted to his homeland, which he loved and glorified so sincerely throughout his life.

Shishkin had a troubled private life, twice he fell in love and married and twice his wives died. His sons also died. But he never allowed his sorrows to appear on his canvases. Shishkin died suddenly in his studio in St. Petersburg, while working on the painting “Forest Kingdom.”

The largest collections of Shishkin's work can be viewed at the Tretyakov Gallery in Moscow and the Russian Museum in St. Petersburg.