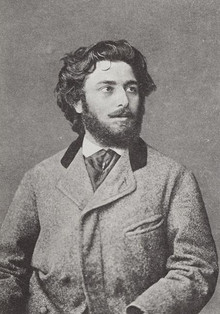 Arkhip Kuindzhi was a Russian landscape painter with a talent for depicting light and its effects.

Kuindzhi’s exact date of birth is unknown: different sources name different years. He was born in the southern Ukrainian town of Mariupol, into a shoemaker's family, and spent his childhood beside the Black Sea.

When Kuindzhi was six, both of his parents died. The boy had to live at his brother’s (or possibly at his grandfather’s), and to make a living by herding geese. The only education he received was reading lessons taken from some barely literate Greek and about three years at the local public school. According to his former classmate’s memories, Kuindzhi was not good with math or grammar, but he liked to draw and spent the whole time in class doodling in his copybook.

At the age of 10, Kuindzhi gave up school and got a job at the construction site of a nearby church. When the works were over, Kuindzhi was hired by a merchant as a domestic servant. Between running errands, cleaning shoes and serving at the table, Kuindzhi found time to draw. His pictures impressed one of his employer’s friends, who advised the boy to become an apprentice to the famous seascape painter Ivan Aivazovsky. Kuindzhi followed the advice, and in 1855 arrived in the town of Feodosia, where Aivazovsky lived.

Kuindzhi lived for about four months at the Aivazovsky’s house, but the maestro paid no attention to him and his ambitions. Kuindzhi only mixed up paints for his tutor and once was ordered to paint the fence. It was Aivazovsky's relative named Adolf Fessler who in his spare time showed Kuindzhi some artistic skills. However, watching a professional artist at work affected Kuindzhi and helped him to choose his way in life.

At the beginning of the1860s, after several years of working as a retouch artist in photographers' parlors, Kuindzhi left for St. Petersburg to pursue his dream: to attend The Academy of Fine Arts. He failed the entrance exams twice in a row, but did not give up.

His third attempt was also unsuccessful, but thanks to his talent Kuindzhi received the right to attend the Academy lectures as an irregular student. His picture A Tatar Hut in Crimea, which he had painted to show the examiners, impressed the commission. Unfortunately, it is lost, as are the majority of his early works.

Kuindzhi made many friends among the Academy students. He kept working as a retouch artist, but did not make much money and lived very close to poverty. Kuindzhi’s works became part of the Academy’s exhibitions. In 1869, the press paid attention to Kuindzhi’s art for the first time.

In 1872, the work named Autumn Impassability of Roads brought Kuindzhi an Academy title of a "class artist of the third grade", given to Academy graduates. While his early paintings, according to critics, noticeably resembled Aivazovsky’s, this one was considered original.

The work depicts a woman and a child walking along a path across a withered field. Their cart is stuck in the mud on the road, and the horse stands still, waiting for them to return. The sky is low and gloomy over their heads, and it looks like it is going to snow. The main color of the picture is yellowish brown, the color of the late Russian autumn. Though Kuindzhi was born in the south, this painting proves that he had a deep feeling for northern nature.

In 1874, his work “Snow” was exhibited at the London International Exhibition, and was awarded with the bronze medal. The same year, Kuindzhi began to participate in mobile exhibitions organized by The Wanderers (Peredvizhniki) rebel artist group, which included some of his friends. Unlike the Academy professors, The Wanderers preached realism and were sure that art should reflect social problems.

His first picture displayed at such an exhibition was "The Forgotten Village". It is painted with the same palette as the Autumn Impassability... and depicts a small village underneath the pale sky. The low huts seem to merge with the brownish grass. Unlike this one, his next picture, The Steppe is full of light and depicts a bright summer’s day.

In 1875, Kuindzhi married a woman he had known and loved since childhood: Vera Ketcherdzhi. Her memoirs are one of the most reliable sources of information about the artist's life. Kuindzhi did not keep a diary or any records of this kind.

In 1876, Kuindzhi exhibited his true masterpiece: The Ukrainian Night. The colors of the painting are the deep colors of the southern landscape. The clay whitewashed houses dream calmly under their straw roofs, lit by moonbeam, against the background of the dark blue sky. The light is painted so realistically, that the canvas seems to glow. Later paintings The Forest and The Evening are also remarkable for the light effects and show the development of the artist's skills.

In 1879, Kuindzhi left The Wanderers to seek his own style and mood, and a year later impressed the public and critics with the famous The Moon Night on the Dniepr River.

Admirers of Kuindzhi’s art were so interested in this picture that his friends kept visiting his workshop to watch the birth of the masterpiece. On weekends, the unfinished work was exhibited for every citizen to see. The famous art patron Prince Konstantin had bought the painting long before it was finished.

In the picture one sees the Dniepr, which rolls its greenish waters across the wide plain. A village stands on its bank, and the full moon looks at it from the dark sky. Moonlight is the main part of the composition: it flickers in the waves, enlightens the white walls of the houses, colors the clouds silver. The shining unites the sky and the earth in a peaceful and solemn harmony.

When the painting was exhibited, the illusion of light appeared to be so realistic that many people furtively attempted to look behind the canvas, certain there must have been a lamp there. To intensify the effect, the picture was placed in a dark hall and enlightened by one electric beam aimed directly at it. 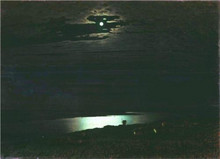 Arkhip Kuindzhi "The Moon Night on the Dniepr River"

In 1882, Kuindzhi made an exhibition of three of his paintings: The Moon Night on the Dniepr River, The Birch Grove and The Morning Dniepr. After that, he neither participated in any exhibitions nor showed his works to anyone until the 1900s, though he did not give up painting. It is not known what made him make such a move: he was possibly going through some personal drama.

In 1894, Kuindzhi headed the art school under the Academy of Arts. According to the memoirs of contemporaries, at one point the Academy refused to fund the educational trip abroad for one of the students. The refusal was based on the student’s ethnicity only: he was a Jew. When Kuindzhi heard about this decision and its reasons, he paid for the trip from his own purse. The student, Isaak Brodsky, did not fail the trust and became a famous artist in the 1930s.

Among Kuindzhi's apprentices was world famous painter Nicholas Roerich. He called Kuindzhi "strong and honest". In his articles and memoirs, Kuindzhi appears as a great teacher, loved and respected by his pupils.

The contemporaries remember Kuindzhi as a short-tempered, but kind man. He was kind of greedy for fame, but often donated anonymously to charity. He and his wife lived in a house in the center of the city, and did all the household duties by themselves, without hiring any servants. Kuindzhi, especially in his later years, liked birds - tamed them and nursed them in ill health.

Kuindzhi died of old age and is buried in the Tikhvinskoye Cemetery in St. Petersburg.