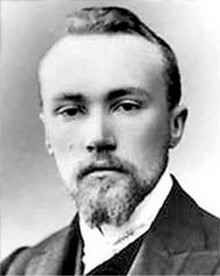 He was the father of orientologist George Roerich (Yury Roerich) and artist Svyatoslav Roerich. Nicholas Roerich and his wife Helena were founders of the Agni Yoga Society.

One of the brightest representatives of Russian symbolism and modernism, his legacy is enormous. More than 7,000 paintings are exhibited in famous art galleries in different parts of the world. Being as gifted a writer as he was a painter, Roerich wrote books, tales, legends, poetry and commentaries on life and events.

Nicholas was born in St. Petersburg into the family of a notary on October 9, 1874. In 1893 he enrolled simultaneously in the University Faculty of Law and the Emperor’s Academy of Arts, where he studied in the studio of the famous Russian landscape painter Arkhip Kuinji.

In 1900 Roerich studied in Paris with the artist Fernand Cormon.

In 1901 Nicholas married Helena, the daughter of the architect Shaposhnikov, and a niece of prominent Russian composer Modest Mussorgsky. Helena was a talented pianist and the author of a number of books.

Issa and the Skull of the Giant

Also in 1901 Nicholas became Secretary of the School of the Society for the Encouragement of Art, later becoming its head, the first of many positions that Roerich would occupy as a teacher and spokesman for the arts.

In 1902 the Roerichs celebrated the birth of their first son Yury and in 1904 Svyatoslav was born.

In 1909 Nicholas Roerich became an academician of the Russian Academy of Arts and in 1910 he became chairman of the ‘World of Art’ movement.

Roerich left Russia in 1917, the year of the revolution. He lived and worked in Scandinavia and England. In 1920 the Roerichs emigrated to the United States.

In 1923 Roerichs’ longtime dream came true when they embarked on their Central Asian tour, visiting India, Chinese Turkestan, Altai, Mongolia and Tibet. Nicholas wrote about this expedition in his book ‘Heart of Asia’, in which he described these mysterious lands and peoples. Nevertheless, the images are nowhere as vivid as in the paintings that resulted from the expedition.

Lake of the Nagas

In 1928, the family settled in the Indian Kullu Valley in the Himalayan foothills. Here they established the headquarters of the Urusvati Himalayan Research Institute, which carried out botanical and ethnological-linguistic studies and the exploration of archaeological sites.

In 1929 Roerich was nominated for the Nobel Peace Prize by the University of Paris.

Igor Moiseev He became a choreographer at the Bolshoi Theater at the age of 24 and at 31 organized his own folk dance ensemble, becoming the Soviet "Lord of the dance".