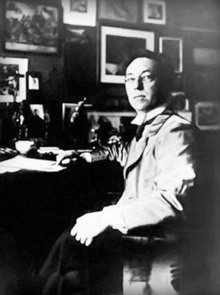 One of the founding fathers of abstract art, Vassily Kandinsky was not only a painter but an art theorist. Becoming a professional artist only at the age of thirty, he tried several styles before developing one of his own and substantiating his painting and overall artistic principles in a series of theoretic works.

Born on 4 December 1866 into the well-to-do family of a businessman in Moscow, at the age of five he moved to Odessa, where his father managed a tea factory. Although in childhood Kandinsky took painting and music classes, his parents did not expect him to pursue an artistic career. Something more down-to-earth and “decent” was in store for him.

The young man who would revolutionize art and largely determine its development in the 20th century acquired an “appropriate” and respectful profession, which he exercised for several years. In 1886 Kandinsky enrolled in the law faculty of the Moscow University. After graduating with an honors diploma he started work on his thesis and in 1893 became an assistant professor at his alma mater. Gradually, though, he came to realize that he was not ready to dedicate his life to law.

In 1896 he refused a promising offer from Derpt (Tartu) University to head a chair there. Instead, he headed to Munich – back then considered one of the centers of European art - to enroll in the prestigious private school of Anton Azbe. In fact, he had made the decision to become a professional artist a year before – when he saw Claude Monet’s “Haystacks” at an Impressionists’ exhibition in Moscow, according to Kandinsky’s own memoirs. He was also greatly impressed and influenced by a performance of Wagner’s opera “Lohengrin,” seen at the Bolshoi Theater in Moscow. But the true roots of his love of art probably lie in his childhood. At the age of three he traveled to Italy with his parents. Not only was he forever impressed by the Italian people but also by the country’s rich colors.

At Azbe’s school in Munich Kandinsky gained his first skills in composition, line and form. He then continued his studies at Munich’s Academy of Fine Arts under Franz Stuck, then “number one German graphic artist.” A symbolist, Stuck worked in quite a somber palette and considered that of his student to be “too bright.” Stuck advised him to paint exclusively in black and white for some time in order to get a better feeling of the form. Kandinsky’s later interest in pure form and line was not in the least encouraged by his master. 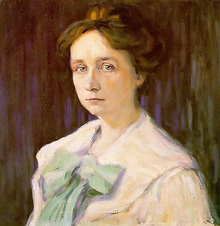 Munich changed not only the course of Kandinsky’s professional career but also that of his personal life. There he met a young artist, Gabriela Munter – this acquaintance grew into a serious relationship and led him, in 1903, to divorce his Russian wife Anna Chimyakina, with whom he had lived for almost ten years.

From 1903 to 1908 Kandinsky and Gabriela traveled extensively across Europe and took part in numerous art shows. These impressions would later find their way into his works.

The first years of the 20th century were extremely prolific for the artist but his paintings at the time were a far cry from the pure abstractions, which would become most associated with his name. During this period Kandinsky rendered the subject matter of his paintings in simple and easily recognizable forms. These are mainly landscapes and views of towns he visited (“Akhtyrka. Autumn. A sketch,” 1901; “Sluice,” 1901; “Old Town,” 1902; “The Gulf Coast in Holland,” 1904; “Murnau. The Bailey,” 1908). 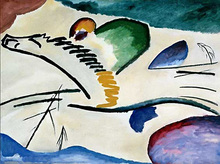 In 1903 he painted the famous “Blue Rider,” which is the key to understanding his artistic principles and the further evolution of his work. The character on canvas, the Blue Rider is prominent but not clearly defined. Some suggest there is another figure on the canvas, probably a child, who might well be a shadow. Such double interpretation allows the viewer to participate in the creation of the artwork – something that would subsequently define Kandinsky’s approach.

Always in motion, full of new ideas and eager to go forward, Kandinsky brought together those who shared his vision. He organized several artistic associations and regularly participated in their exhibitions. Twice – in 1910 and in 1912 – he exhibited at shows of the Bubnovy Valet (Jack of Diamonds) avant-garde artistic group.

In 1911 Kandinsky founded The Blue Rider (Der Blaue Reiter) group bringing together like-minded artists such as August Macke and Franz Marc. The group concentrated on “revealing associative properties of color, line and composition,” as Kandinsky explained, drawing inspiration from various sources, such as Johann Goethe and Philip Runge’s romantic theory of color, “Jugendstil” and Rudolf Steiner’s theosophy. The group published The Blue Rider Almanac and held two exhibitions. Kandinsky’s writings for the almanac and a work called “Concerning the Spiritual in Art” (1912), laid the foundations of abstract art.

The Blue Riders remained at the center of avant-garde art till the beginning of the First World War, which forced Kandinsky to return to Russia. During the first years that followed he created a series of stylistically diverse paintings ranging from abstract compositions to realistic landscapes.

In 1913 the artist published a book of his memoirs, “Looking Back,” and a book of poems, “Sounds,” illustrated with 55 black-and-white and color lithographs.

In August 1914 Kandinsky and Gabriela move to Switzerland. Just a few months later they parted – Gabriela returned to Munich while Kandinsky headed back to Moscow. There he met his third wife, Nina Andreevskaya, who he married in February 1917.

After the October Revolution of 1917 Kandinsky painted little but was very active as a public figure, heading a commission for the purchase of fine art. He also continued his theoretical studies, which he taught at the newly created Institute of Artistic Culture in Moscow. 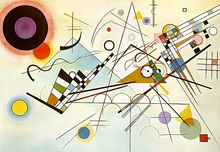 However, he left the institute in December 1921 because of disagreements with his colleagues who called his works “deformed spiritualism.” Pressure from the Communist leadership on art would continue to grow (resulting a decade later in the appearance of an officially approved artistic current - socialist realism - in line with Communist ideology) and for many years Kandinsky would be banned from Soviet museums and galleries.

Fortunately the same year he was invited to the Bauhaus architecture and art school in Germany to teach basic design and painting and theory of form. His paintings of this period are dominated by geometrical elements, particularly circles, half-circles, angles, strait lines and curves. He also fell for the romantic theory of Gesamtkunstwerk – a term introduced by Wagner, meaning a synthesis of multiple arts forms in one work. These ideas are reflected in the “Color-Tone Drama,” “The Yellow Sound” and illustrations to the ten-piece piano suite by Modest Musorgsky “Pictures at the Exhibition.”

In 1924 Kandinsky joined Paul Klee, Lyonel Feininger and Aleksey von Jawlensky to form Die Blaue Vier (Blue Four) group, who shared the idea that line, color and form alone are art. The artists lectured and exhibited together in the US.

In 1926 Kandinsky published his second major theoretical study “Point and Line to Plane,” which has been translated into dozens of languages and reedited in many countries worldwide.

A fierce Nazi campaign against Bauhaus led to the school’s closing in July 1933. Many of Kandinsky’s water colors painted between 1926 and 1933 were lost, as the artist was one of those declared “degenerate.”

Kandinsky had to leave Germany. He settled in the suburbs of Paris, where he resided in Neuilly-sur-Seine for the rest of his life.

During the last decade of his life Kandinsky turned to painting biomorphic forms with non-geometric outlines, evoking Slavonic popular art. The period was the synthesis of his previous work but was also marked by surrealism (although Kandinsky denied being influenced by the latter). In 1936 and 1939 Kandinsky produced two last major canvases – “Composition IX” and “Composition X.”

In France the artist was rather isolated - Impressionism and Cubism dominated artistic life at the time. Kandinsky’s geometric abstract painting was received with suspicion and was not recognized.

Today no one questions Kandinsky’s contribution to 20th century art and his role in its development. In 2007 an annual Kandinsky Prize was established in Russia. Its main criteria are the novelty of work, the artistic language of the art object and its influence on modern art.