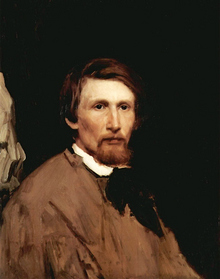 Among the historical painters of the turn of the nineteenth century, Viktor Vasnetsov is probably best noted for his depth of feeling and power of style.

A painter, draftsman and graphic artist, Vasnetsov played a primary role in the development of Russian art from the realist traditions of the Wanderers to Art Nouveau. He is considered a key figure in the revivalist movement in Russian art.

Born in the village of Lopiyal in Viatka Province, Vasnetsov was destined to become a priest like his grandfather and father before him.

His father was a well-educated and philosophically-inclined man interested in natural science, astronomy and painting. His grandfather was an icon painter. Viktor had two brothers; one of whom became a fellow painter while the other became a school teacher.

At the age of ten, Viktor began studying at a seminary, spending summers with his family in the rich merchant village of Ryabovo. During his seminary years he worked for a local icon shopkeeper. He also helped the exiled Polish artist, Andriolli, to execute frescoes for Vyatka’s Aleksandr Nevsky Cathedral.
After graduating from the seminary, Viktor decided to give up his theological career and moved to St. Petersburg to attend the Imperial Academy of the Arts. He auctioned his paintings “Woman Harvester” and “Milkmaid” (both 1867) in order to raise the money required for the trip to the city.

Three years later, the Peredvizhniki (the Wanderers) movement of realist artists rebelled against Academism. Vasnetsov befriended their leader, Ivan Kramskoy, referring to him as his teacher. He also became very close to his fellow student, Ilya Repin, another prominent Russian artist.

Ironically, Vasnetsov, who is intricately associated with historical and mythological paintings, initially avoided these subjects at all costs.

In the early 1870s he executed many engravings depicting contemporary life. Two of these (“Provincial Bookseller,” 1870 and “A Bottle of Vodka,” 1872) earned him a bronze medal at the World Fair in London in 1874. Around that time, he started producing genre paintings in oil. Such pieces as “Peasant Singers” and “Moving House” were warmly welcomed by democratic circles of Russian society.

In 1876 Repin invited Vasnetsov to join the Wanderers colony in Paris. While living in France Viktor studied classical and contemporary painting. It was also during this time that he began to discover what would become his primary source of inspiration - Russian mythology and its legends, ballads, and fairytales. The 'folklore outlook' was still very much alive in the northern Russian village where he grew up and Vasnetsov found that his very soul was steeped in the poetry of Russian epic literature. Not only was he one of the first artists to turn to folklore for inspiration, but he also one of the first to study it in terms of method and technique. Thus he became the founder of a new style in Russian painting. 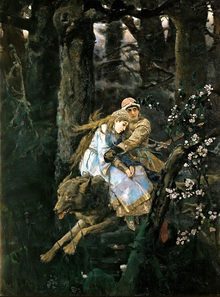 In Paris, Vasnetsov starting work on his first fairytale subjects, “Ivan-Tsarevich Riding a Grey Wolf” and “The Friend.” He was also the model for Sadko in Repin’s celebrated painting “Sadko in the Underwater Kingdom.” The large canvas, “Fairground Booths in Paris,” 1876-77 is also a product of Vasnetsov’s Paris period.

In 1877 Vasnetsov returned to Moscow. "When I came to Moscow, I felt I had come home," he wrote.
At that time his imaginary characters were 'little men' portrayed in the spirit of the time when the Wanderers (Peredvizhniki) movement was at its prime. This period is best exemplified by such paintings as “From Lodging to Lodging,” 1876 and “The Preference,” 1879, a moralizing canvas done in the spirit of William Hogarth. Both of the works were based on the tradition of genre painting derived from Dutch painting, and both were warmly received by the public.

The last decades of the 19th century witnessed a powerful upsurge of public interest in Russia's ancient past, brought about by the Old Russian Revival. Vasnetsov became one of the founding figures of this artistic movement.

In the late 1870s Vasnetsov concentrated on illustrating Russian fairytales and tall-tales. During this period, he executed some of his best known pieces such as “Alyonushka, Knight at the Crossroads.” The works, however, were not appreciated at the time they appeared. Even such prominent connoisseurs as Pavel Tretyakov refused to buy them. The popularity of Vasnetsov’s paintings would spread in the 1880s, when he turned to religious subjects and executed a number of icons for the Abramtsevo Estate of his patron, Savva Mamontov.

From 1884-1889 Vasnetsov was commissioned to paint frescoes in St. Vladimir’s Cathedral in Kiev. It was challenging work.

Vasnetsov jumped at this offer as it gave him the opportunity to create an integral ensemble comparable to those done by ancient fresco-painters. Work on the decoration of the cathedral took over 10 years, during which time Vasnetsov executed nearly 400 sketches and studies. The murals he and his assistants painted covered almost two thousand square meters. In fulfilling this assignment, Vasnetsov relied on his favorite range of motifs and characters, painting the walls with the images of Princes Vladimir, Alexander Nevsky and Andrey Bogoliubsky, Princess Olga, the chronicler Nestor, and other outstanding figures from Russian history.

The influential art critic Vladimir Stasov called the frescoes “a sacrilegious play on the religious feelings of the Russian people.” Another popular critic, Dmitry Filosofov, referred to them as “the first bridge over the 200-year-old gulf separating different classes of Russian society.”

The Bogatyrs (Image from www.artelli.ru)

While living in Kiev, Vasnetsov made friends with Mikhail Vrubel, who was also involved in the Cathedral decoration. While they worked together, Vasnetsov taught the younger artist a great deal. It was in Kiev that Vasnetsov finally finished “Ivan Tsarevich Riding a Grey Wolf” and started his most famous painting, “The Bogatyrs.”

In keeping with the general tendencies in the development of Russian art at the end of the 19th century, an important role is played in Vasnetsov's works by landscape elements, “moods” which unite people and nature, akin to folklore “parallelism” of imagery.

“Ivan Tsarevich Riding a Grey Wolf,” 1889, depicts a scene from a popular Russian fairytale. The magical plot has been reflected in numerous literary works and musical pieces. The landscape background was derived from studies made in Abramtsevo. The landscape is very important. Forces of evil surround Ivan Tsarevich and Helen the Fair. The impassable wall of the wood rises in front of them. The artist's imagination has transformed an ordinary wood near Moscow into a fantastic, mysterious wilderness.

In 1885 the painter traveled to Italy. That same year he worked on stage designs and costumes for Nikolay Rimsky-Korsakov’s opera “The Snow Maiden.” Later on Vasnetsov collaborated with his brother, Apollinary, on the theatrical design of another Rimsky-Korsakov premiere, “Sadko” in 1897.

In the 1910s Vasnetsov was commissioned to design a new uniform for the Russian military and produced the so-called “bogatyrka” military cap.

In the late 19th and early 20th centuries Vasnetsov actively worked in different fields. At the turn of the century he elaborated his hallmark “fairytale” style of Russian Revivalist architecture. His first acclaimed design was a church in Abramtsevo in 1882, executed jointly with Vasily Polenov. In 1894 he designed his own mansion. The house built to his project in 1894 in Moscow was turned into the Vasnetsov House Museum in 1953. The picturesque wooden house that Vasnetsov lived in has some beautiful wooden furniture and tiled stoves downstairs as well as several of Vasnetsov's paintings of fairytale characters such as Sleeping Beauty and Baba Yaga in the studio upstairs. Unlike many house-museums where the furniture has been brought in to approximate the requisite era, everything here is original, from the 19th century benches to the huge canvases in the wooden attic. Vasnetsov's paintings here are at least as good as the ones in the Tretyakov Gallery, the facade of which Vasnetsov designed in 1906.

After many years of living in different places, Vasnetsov finally felt at home in this house with his wife Aleksandra Ryazantseva and their five children.

Even prior to the Russian Revolution, Vasnetsov became active as a regent of the Tretyakov Gallery. He allocated significant money to the State Historical Museum, so that a large part of the museum’s collection was acquired with his money. After the October Revolution he advocated the relocation of religious paintings, notably those by Aleksandr Ivanov, from churches to the Tretyakov.

Vasnetsov was also a brilliant portrait painter and book illustrator. His paintings greatly influenced the development of modernism and symbolism in Russian painting and poetry.

In scope and monumentality Vasnetsov’s works are incomparable; his great artistic merit and profound conception have become the pride of Russian national culture.

“A true work of art expresses everything about people,” Vasnetsov believed. “It conveys the past, the present and perhaps the future.”