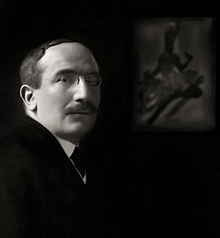 Born into a middle-class Jewish family in Grodno on 10 May 1866 as Lev Samoylovich Rosenberg, he later took a pseudonym derived from his grandmother's family name, Baxter.

Leon Bakst was educated in St. Petersburg, where he attended the gymnasium and the Academy of Arts (1883-1886). He began his professional life as a copyist and illustrator of teaching materials, although he quickly moved on to painting portraits and illustrating popular magazines.

But these jobs didn’t pay much and he took up employment as an art teacher for the children of Grand Duke Vladimir.

From 1893 through to 1899, Bakst travelled widely in Europe and North Africa. He studied in Paris with a number of notable artists, including the French orientalist Jean-Leon Gerome at the Academie Julian. From 1893 to 1896 he studied with the Finish landscape painter Albert Adelfelt.

He came into contact with Aleksandr Benua and his circle in 1890, a meeting that was to shape Bakst's taste and expand his artistic vision.

Together with Benua and Sergey Diagilev he co-founded the influential World of Art (“Mir Iskusstva”) group in 1898, and was largely responsible for the technical excellence of its influential magazine.

The very first issue of the World of Art amazed its readers, who hadn’t seen anything like that in Russia before. The magazine itself was a work of art; its emblem was a lone eagle on top of a mountain. Leon Bakst designed it, saying the emblem represented art itself: “The World of Art is higher than everything earthly – it reigns amidst stars, mysterious and haughty, like an eagle on a snowy mountain top.”

A dedicated professional, who even in mid-career was able to absorb stylistic developments, Bakst was arguably the most accomplished painter, as well as designer, in the World of Art group.

His early preferences were for realist painters and Old Masters, such as Rembrandt and Velazquez. The animated line and relaxed postures in his portraits also suggest the influence of his close friend Valentin Serov.

In 1902, Tsar Nicholas II commissioned Bakst to paint Carnival in Paris in Honour of the Russian Navy.

Later he turned to portraiture, and painted among others the artist Filipp Malyavin (1899), the philosopher Vasily Rozanov (1901), the poet Andrei Bely (1905), and the poetess Zinaida Gippius (1906). Bakst also contributed graphics to such publications as Apollon and Zolotoe Runo (“The golden fleece”).

In 1906 he became a drawing teacher at the Yelizaveta Zvantseva's private school in St Peterburg, where his pupils included Mark Chagall.

Through Benois and his circle, Leon Bakst was attracted to oriental style; and motifs from ancient Greece and Egypt became signatures in his paintings and theoretical work. The Benua circle also introduced him to symbolism and Art Nouveau. Bakst influenced and developed Art Nouveau style by bringing in a curvy line, as well as bright colours, oriental prints, and flowing drapes.

The portrait of the dancer Isadora Duncan (Oxford, Ashmolean) in brush and ink, dating from her Russian tour in 1908, is typical of his draftsmanship in its sensual and flowing movement. 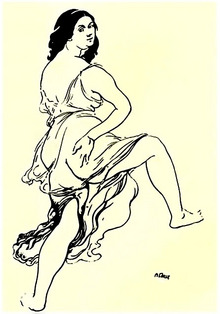 Portrait of Isadora Duncan,
an American dancer (image from all-art.org)

In the 1900s, Bakst mainly practised book design, interior decorating and staging exhibitions. However, by the end of the decade, he concentrated purely on theatre.

He made his theatre debut with designs for stage productions at the Hermitage and Alexandrinsky theatres in St. Petersburg (1902-1903). He was then commissioned to produce several works at the Maryinsky theatre (1903-1904).

In 1909 he collaborated with ballet impresario Sergei Diagilev in the founding of the Ballets Russes. He acted as artistic director and his stage designs rapidly brought him international fame.

Between 1909 and 1921 he designed more Diagilev productions than any other artist and his name became inseparable from the Ballets Russes.

His designs for Fokine and Nijinsky’s ballets caused a sensation. Especially influential was the exotic oriental fantasy Scheherazade (staged in Paris in 1910). Bakst’s sensuous use of colours prompted new fashions in dress and interior decorations, and soon fashionable ladies were seen in orient inspired clothes, lounging on huge floor cushions in curtain-draped rooms.

Similarly his designs for Greek ballets like Daphnis and Chloe were a revelation in their use of hot tones and geometric patterns.

He also created beautiful clothes, such as his Victorian designs for Papillons or the 18th century designs for Diagilev’s production of The Sleeping Princess. 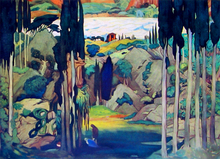 A stage design by Leon Bakst
(image from bibliotekar.ru)

Bakst’s designs grew out of and complemented the choreography and style of a particular ballet. He integrated vertical space with movement on stage.

His costumes enhanced movement without restricting the body. The sets enclosed the action yet left maximum space for dancing. Bakst’s exotic, sensuous designs have become sought after in their own right, but their success lay in how they ‘worked’ on stage.

However, his costumes for Diaghlev's revival of the Imperial Ballet, The Sleeping Princess (London, 1921) were appropriately traditional as may be seen from his Design for Columbine from the ballet (London, Theatre Museum).

He also designed for other celebrities, including Vera Komissarzhervskaya in 1906 and Ida Rubinstein between 1911 and 1924.

Rubinstein's ballet Le Martyre de saint Sebastien by Claude Debussy (Paris, 1911) provided him with another spectacular triumph. He settled in Paris in 1912, having being exiled from St. Petersburg where, as a Jew, he was unable to obtain a residence permit.

He travelled to St. Petersburg as a tourist and was even elected a member of the Russian Academy of Arts. However, World War One forced him out of his home country forever.

Bakst continued working for Diagilev until the conflict between them intensified and he was forced to leave the ballet company in 1918.

After the split, he continued to work hard, but failed to create new forms. Although he continued to be successful, he was beginning to fade artistically. He died of lung cancer in 1924 at the height of his fame.