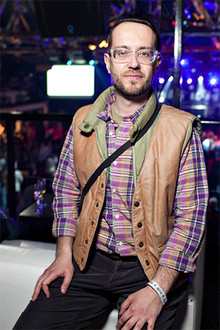 Born in Magnitogorsk, in the Urals district of Russia, Maksim Chernitsov did not follow type to become a metallurgist in one of the world's biggest iron industry centers. Instead, he studied at the philological faculty of the Magnitogorsk State University and defended a thesis on literary experiences of the Russian avant-garde artists of the early 20th century.

Chernitsov also wrote poems and his verses were published in some of Magnitogorsk newspapers. After he completed his undergraduate education and became a candidate of philological sciences, the designer-to-be won various contests – not literary ones, but those of young fashion designers.

After he caused a stir in his native city and some other places (including Ekaterinburg, St. Petersburg and Tbilisi) he moved to Moscow, and in 2002, together with businesswoman Yulia Vedernikova, founded the brand Max Chernitsov.

The designer presented his first collection on the catwalk of Russian Fashion Week in spring 2003. Since then he has been a headliner of the event for several seasons; he also shows his collections in other countries around the world, including Italy, Portugal and Canada.

One of Chernitsov's first collections was inspired by literature he knew so well and was named Pushkin Fever. The work which brought him international recognition was the collection of 2005 named Homocosmodromo, with an eccentric use of space-travel theme. Its t-shirts, jackets and jumpers with prints of Belka and Strelka (the Soviet space dogs launched into orbital flights) and Yury Gagarin got reviews in International Herald Tribune, W, ID and the Financial Times, with the latter calling Max Chernitsov “the 27-year-old fairytale rise from small-city philologist to one of Moscow's hottest designers.” 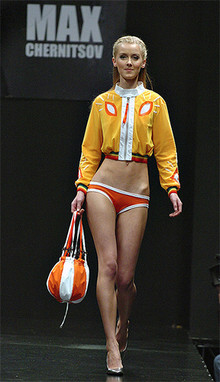 Now the designer, who is a fan of Jean Paul Gautier, Vivienne Westwood and Viktor&Rolf, creates collections of women’s and men’s prêt-a-porter and underwear. He combines practicality with casual elegance, paying special attention to the use of colors.

Max Chernitsov collections are always bright, with the mix of sky-blues, silver-greys and black being his signature shades.