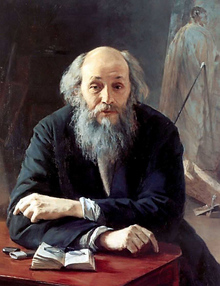 Nikolay Ghe (Gay) was an Itinerant artist. He dreamed of creating a common artistic image of his homeland in his painting. He believed that his art would give people happiness and hope. The Itinerant artists were from all walks of life and of all ages. Some were peasants, and some, like Ghe, were of the nobility, but all were united by a single goal - to depict life in Russia as it really was; the love of the Russian people for their country and its nature was deified.

The great Russian art critic Vladimir Stasov defined the Itinerants as follows: “The artists striving to unite, to set up their own society, were not doing it for the purpose of creating beautiful paintings and statues for the sole purpose of earning money. They were striving to create something for the minds and feelings of the people.”

The Itinerants held sway over Russian art until the first decade of the 20th century. They will always be among the best of what Russian art has to offer, Nikolay Ghe being one of their greatest representatives.

Nikolay Nikolaevich Ghe was born in the town of Voronezh, in the year of the cholera epidemic. His mother died just three months after his birth. The future artist spent his childhood in Ukraine on the estate of his father, the grandson of a French émigré, Gai, who had moved from France to Russia at the end of the 18th century during the Great French Revolution.

Nikolay was brought up by his nurse. Memories of his childhood and the hard life of the serfs sunk deeply into the artist's mind. All his life Ghe would remember the brutality of some and the pain and suffering of others. His nanny taught him compassion for the humiliated and insulted. She was his teacher of justice and life and endowed him with sensitivity to the grief of others.

The Academy of Arts 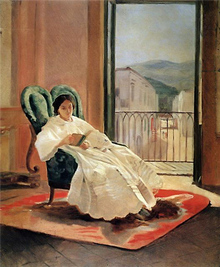 As a schoolboy Ghe loved to draw and do watercolors with his drawing teacher; even back then it was obvious he was destined to become an artist. But Ghe did not believe in his talent and at his father’s recommendation entered the mathematics department of the Kiev University. In 1848 he entered the Petersburg University. In Petersburg over the course of two years (1848-1849) Ghe combined his studies at the university with visits to the Hermitage museum and long hours spent drawing at the Academy of Arts. The fact that Ghe joined the Academy of Arts in 1850 did not surprise anyone. At the Academy Ghe closely studied the works of Karl Bryullov and tried to create something similar. Bryullov’s influence can be traced in Ghe’s student works, such as “Leila and Khadji-Abrek” (1852), “The Judgment of King Solomon” (1854) and “Achilles Lamenting the Death of Patroclus” (1855). All his works, though rather romantic, are fulfilled in accordance with the demanding principles of classicism adopted at the Academy. Ghe studied in the class of professor Pyotr Basin, a painter of historical themes and portraits. Having mastered academic painting, Ghe was awarded a Major Gold Medal for his painting “Saul and the Witch of Endor” in 1856. It earned him a scholarship to travel abroad at the expense of the Academy. Ghe literally fled Imperial Russia.

Meanwhile he fell deeply in love with Anna Zabello (the daughter of a famous architect). They were married on 28 October 1856 and lived together happily for 35 years. “In his beloved wife, though she was far from being a beauty, he saw and painted Magdalena…” Grigory Myasoedov, a famous Russian painter, pointed out.

After visiting Germany, Switzerland and France, he settled for six years in Italy from 1857 to 1863. 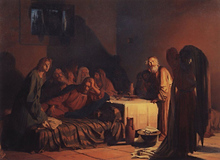 Ghe was one of the founders of the “Society of Traveling Art Exhibitions” that raised cardinal moral problems of the day by interpreting biblical subjects in a new way. In the 1870-80s historical painting for the first time seemed to reveal all the answers to the relevant questions addressed by the past. Popular revolts, acts of terrorism, execution, heroic deeds, sacrifice, suffering, betrayal, faithfulness to ideas and treachery are the concepts dominating the Society’s works of art. Some artists approached these problems via religious subjects, very familiar and clear to the Russian people. Nikolay Ghe, was one of them. Upon his return to Russia Ghe exhibited the painting “The Last Supper,” which shocked Russia just as “The Last Day of Pompeii” by Karl Bryullov had once shocked the nation. Ghe put aside the canons of classicism, but his success was so great (Emperor Alexander II bought the painting) that the Academy of Arts had to award the artist the title of professor. 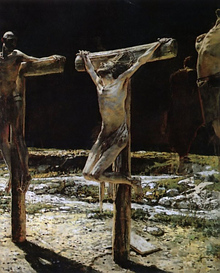 The painting “The Last Supper” lacked mystery and sacred meaning. Like-minded people had become enemies. Judas, who thought of the salvation of his people, did not grasp the great idea of Christ providing salvation for the whole of mankind. The philosophic disagreement, but not the betrayal of a greedy man, became the subject of the painting. There are only 11 Apostles depicted in the painting, while Judas looks like a winged Angel of Death. In his later period, he embodied Ghe’s ideal of a hero, who was persecuted for the truth and stood up for the oppressed, in the image of Christ. Ghe dedicated his works “Calvary” and “Crucifixion” to humanity, at a time when spiritual strength and faithfulness to ideas overcome physical suffering. Ghe didn’t live to finish his last painting “Calvary” (1892), the expressiveness and tragic impact of which are truly staggering.

Ghe tried his hand at different genres, including portraits, historical scenes and religious paintings but none of these satisfied him. So he turned to Russian history. The canvas “Peter the Great Interrogates Tsarevich Aleksey at Peterhof” (1871) again brought him success. Once more the subject of the picture is the real historical conflict of a father and son, each of whom had his own truth. His other historical paintings were not as successful with spectators and critics. Ghe took this rejection very hard, failing to believe in his own talent. His lack of creative satisfaction and financial woes caused him to abandon city life. In 1876, Ghe bought an estate in the city of Chernigov in southeastern Ukraine and moved there. He stopped painting and went into farming and agriculture. Some time later he got acquainted with Leo Tolstoy and became an apologist of his philosophy, later painting the portrait of the famous writer. 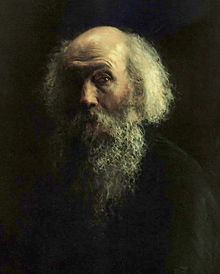 In early 1880, Ghe returned to painting, with biblical themes prevailing. He made exceptions only for portraits. He painted many of them even for very low commissions, believing that portraits must be available to everyone. Among his portraits the most famous are those of the writer Mikhail Saltykov-Shchedrin, the poet Nikolay Nekrasov (both 1872), Leo Tolstoy and members of his family.

Ghe’s later biblical painting “Quod Est Veritas? Christ and Pilate” (1890) was expelled from an exhibition for blasphemy. “The Judgment of the Sanhedrin: Guilty!” (1892) was also not admitted to the annual Academy of Arts exhibition. “The Calvary” (Golgotha), as mentioned above, remained unfinished. “The Crucifixion” (1894) was banned by Emperor Alexander III.

Ghe died abruptly in March 1894 on his estate.

Nikolay Ghe was a profound philosopher and great, unforgettable master, who never ceased learning and examining the world closely. His paintings remarkably reflect the era in which he lived.