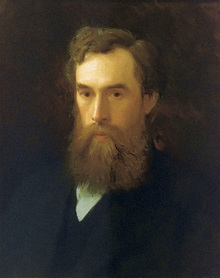 Pavel Tretyakov was a famous Russian art collector. In 1856, Tretyakov, a Moscow merchant, acquired the first paintings in his collection. Today the collection numbers 140 000 works, making it Russia’s largest anthology of national art.

Pavel Tretyakov was born on 27 December 1832 in Moscow into a merchant’s family. His father Mikhail, an experienced businessman, succeeded in textile trade and owned a textile factory. Pavel’s mother Aleksandra Borisova was the daughter of a wealthy man. Pavel was home schooled, and together with his younger brother Sergey, was an “errand boy” in the shop for their family textile firm. Pavel and Sergey also had three sisters. The grown-up Tretyakov brothers expanded their father’s business by building new textile factories that employed more than 5000 people. After their father’s death, their mother was temporarily considered a second guild merchant woman. She passed the family business onto her sons in 1859. Pavel Tretyakov remained a merchant until the end of his life, since his business allowed him to do what he loved most - collecting art.

Start of the gallery

In the first half of the 19th century collecting art was the business of noblemen and rich landowners. With the emancipation of the serfs in 1861 many landowners were unable to cope with the new economic conditions. Some moved away from their estates, while others sold some of their properties. This led to a flooding of the Russian market with many art works. The economic power and prosperity shifted from the nobility to merchants and entrepreneurs. These new social groups took over practices of the upper classes, including collecting art. Thus, the emergence of a new generation of merchants provided a new impetus to the development of art in the cultural life of Russia. Some of them, like Pavel Tretyakov, were driven by a vision: Tretyakov sought to create a complete gallery of Russian national art. 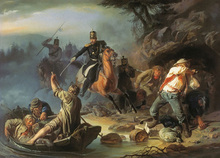 Since his youth Pavel Tretyakov was fond of art, music and theater. During his business trips to St. Petersburg in 1852 he sent home letters in which he enthusiastically wrote about theater performances he had attended. His fascination with art inspired him to start his collection. In 1854, at the age of 22, he began collecting paintings. His first purchases included both Russian and foreign paintings. He first bought nine Dutch oil paintings, which he kept all his life. However, Tretyakov soon realized he lacked a sufficient art education and decided to focus on the works of his Russian contemporaries. While collecting art he was advised by such artists as Ivan Kramskoy and Vasily Stasov. In 1856 Tretyakov acquired “Temptation” by Shilder and “Finnish Smugglers” by Khudyakov, which in his own words, were the start of his gallery. Afterwards, he purchased paintings by Trutnev, Savrasov, Trutovsky, Bruny, Lagorio, Bryullov and others. From the very beginning, Tretyakov had a clear idea of the final purpose of his collection. He wanted his collection to be open to the public, saying later, “the idea to return to people everything I gained from society stayed with me all my life.”

Tretyakov supported talented artists all over Russia and was a personal friend of many of them. He especially admired a number of young realist painters known as “Peredvizhniki” (The Wanderers). The Peredvizhniki artists tried to show the “true Russia” and acquaint common people with art. They protested against academic restrictions and resisted the belief that all art was centered in St. Petersburg. The Peredvizhniki formed their own organization, which later became known as the Society for Traveling Art Exhibitions in 1870. The society was led by Ivan Kramskoy and included such well-known painters as Grigory Myasoedov, Nikolay Ghe, Vasily Petrov, Ilya Repin, Issak Levitan and others. These painters’ works became the foundation of Tretyakov’s collection. The Peredvizhniki founded a new artistic code that was based on social and political critique, as opposed to pure aestheticism. According to the code, the artists put emphasis on the subject as a means to make their art useful to society. They organized over 48 mobile exhibitions in Moscow, Kiev, Kharkov, Kazan, Orel, Riga, Odessa and other cities. 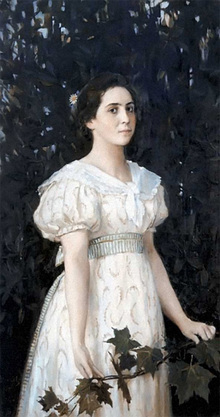 In 1865 Tretyakov married Vera Mamontova. They had four daughters and two sons (one of whom died at the age of 8). It was a very happy family and the children were friendly and considerate with each other. The family was fond of their house in Tolmachi, where Treyakov used to live with his mother and sisters. The parents chose to home school their children. The hard-working father tried to cultivate a taste for good art in his children. The girls inherited a gift for music from their mother. Meeting the brightest people of that time was also a part of children’s upbringing. Writer Turgenev, composers Rubinstein and Tschaykovsky, painters Repin, Surikov, Vasnetsov and Kramskoy were frequent guests in Tretyakov’s house.

At the end of the 1860s, apparently influenced by the British National Portrait Gallery, Tretyakov decided to set up a portrait gallery of great Russian writers, composers and artists. At the time there was not much interest in Russian portraitists - portraits were usually ordered by landowners or bourgeoisie, who had their own vision of what art should represent. Many painters were reluctant to accept such orders. However, the orders from Pavel Tretyakov were different; he did not limit their artistic talent. Thanks to his efforts Russian portrait art of the second half of the 19th century reached new heights and became known worldwide. The best works were those painted on Tretyakov’s order (portraits of Tolstoy, Nekrasov, Dostoevskiy, Turgenev, Goncharov, Tchaykovsky, etc.). Ivan Kramskoy also painted the portraits of Tretyakov (1876) and his wife Vera (1879). All portraits were displayed in the gallery.

The growth of the gallery 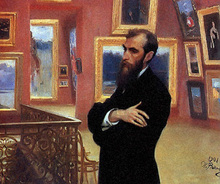 Tretyakov’s gallery grew quickly. He bought paintings at exhibitions and directly from artists. Sometimes he bought whole collections - in 1874 he acquired Vasiliy Vereschagin’s "Turkistan Series" (13 pictures, 133 figures and 81 etudes) and in 1880 - his "Indian Series" (78 etudes). In his collection there were also over 80 etudes by Alexander Ivanov made for his painting “The Apparitions of the Risen Christ.” In 1881 Tretyakov bought Surikov’s “Morning of the Streltzy Execution.” The powerful talent of the young artist fascinated Tretyakov. In 1885 he filled his collection with 102 etudes by Polenov, painted during his travels across Turkey, Egypt, Syria and Palestine. Later he acquired Vasnetsov’s collection of sketches made during his work in the Kiev Vladimir Cathedral. Tretyakov had the largest collection of artists such as Vasiliy Petrov, Ivan Kramskoy, Ilya Repin, Vasily Surikov, Isaak Levitan, and Valentin Serov. In the 1870s Tretyakov also began to collect illustrations.

By 1872 Tretyakov owned more than 150 paintings and had to add another storey to his home in Moscow where he stored his collection. In a few more years, he added more rooms, and in 1881 he opened his gallery to the public.

Tretyakov’s younger brother Segey originally also collected Russian paintings. However, he realized that his patronage of Russian art put him in direct competition with his brother. As Pavel Tretyakov wrote in his letter to Ilya Repin: “Sergey loved painting with a passion, and if he did not collect Russian art, it was because I was collecting it.” Avoiding a family conflict, Sergey turned to contemporary Western art, which he began collecting in the 1870s. However, Pavel always advised his brother on the selection of the paintings. An extensive correspondence between the two, including 200 letters, testifies to their very close relationship. Pavel’s daughter Aleksandra Botkina claimed that her father often advised his younger brother to buy Russian paintings, which he himself could not afford at that time. Based in Moscow, Pavel Tretyakov played an active part in the constant exchange of paintings that his brother sent from Paris. Sergey died in 1892 and his collection of 84 paintings of French art was added to Pavel’s public gallery.

In 1893 the collections of both brothers opened as “The Pavel and Sergey Tretyakov Municipal Gallery.” Shortly afterwards, Pavel Tretyakov presented both collections to the city of Moscow. At that time, the Tretyakov brothers’ gift numbered 1287 Russian paintings, 518 drawings, 9 sculptures, 75 paintings and 9 drawings by foreign artists, valued at 1.43 million rubles.

Besides collecting art, Tretyakov performed a great deal of charity work. He was an honorary member of the Society of Fans of the Applied Arts and the Musical Society from the dates of their foundations. He granted large amounts of money to these organizations, supporting all their educational undertakings. Together with his brother he founded the Arnoldo-Tretyakov School for the deaf in Moscow. He bought a big house with a garden for 150 pupils, where they were taught. Tretyakov personally selected teachers for this school and got acquainted with their teaching methods. He donated half of his money to charitable causes like helping families of soldiers killed during the Crimean and Russian-Turkish Wars, orphans, unmarried daughters of deceased artists and, of course, continued financing his gallery.

Pavel Tretyakov died on 4 December 1898. He was buried at the Danilov Cemetery, but in 1948 his ashes were transferred to the Novodevichye Cemetery. 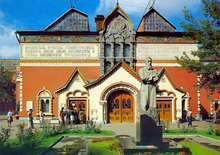 The Tretyakov Gallery after the death of its founder

In 1899 the Moscow City Duma approved regulations for the management of the Tretyakov Gallery. It was decided to organize a Board of Trustees - a corporate body in charge of the Gallery's work. The city mayor, Prince Golitsyn, was appointed Head of the Board and the Tretyakov family’s delegate to the Board was Alexandra Botkina, the second daughter of Pavel Tretyakov. Tretyakov’s house was transformed into a museum.

In the aftermath of the October Revolution of 1917, the gallery benefited from having been state property for some decades already - this saved it from looting during nationalization. In fact, the Tretyakov collection had doubled in size by 1922 - as private art galleries were nationalized, most of their collections ended up in Tretyakov’s gallery.

During World War II the collection was evacuated to Novosibirsk and Perm, transported by thirteen fully packed rail cars. The collection was stored in boxes in the basement of the Novosibirsk Opera Theater. But some of the art was impossible to evacuate from the gallery’s building in Moscow.

After the war the building in Moscow was in an awful state, but permission to close down the gallery was not easily won. The Soviet government insisted the gallery was too important a landmark to shut down. Finally, in December 1982, the state agreed to close the gallery for reconstruction. It reopened in 1995 in a new post-Soviet reality.