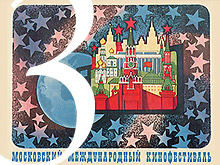 As a matter of fact, the festival was born in 1935, on Stalin’s personal order, and was conducted by the outstanding Soviet director, Sergey Eisenstein. First prize was awarded to “Lenfilm” movie studio with its releases of “Chapaev”, “Maksim’s Youth”, and “The Peasant”. Second prize went to French director Rene Clair for his anti-fascist “Le Billionaire”, and third place was occupied by the Walt Disney Company with its “Three Little Pigs”, “Mickey the Conductor”, and “Penguins” cartoons. The statement read that, “Cartoons by Walt Disney are the paragon of art, thanks to high artistic quality, graphics, and exceptional musicality.” Successful though it was, the festivals were never again held under Stalin.

The modern version of the festival was revived in 1959, under Nikita Khrushchev, after he launched a campaign of peaceful co-existence with the capitalist world in 1956. The next year, Moscow hosted the first Youth and Student Festival, followed by the revived Film Festival, with the motto “For humane cinematography, peace and friendship among people!” no other time could have been better for the festival to open, for both political and artistic reasons. Firstly, the post-Stalinist, “thawed”, Soviet Union had become an attraction for foreigners. Many films, which never made it to other festivals, were on display in Moscow. Secondly, it was the gate to the 1960s, bringing the revival of cinematography, as the movie industry worldwide gleamed with new outstanding names.

In Soviet times, the Moscow Film Festival was distinguished from others as having the largest number of films on display. Along with the actual contest, it also offered a number of minor contests for beginning directors, as well as various conferences, seminars, and creative labs.

The early festivals, however, were not fully appreciated for the chance they offered to get to know the “exotic” productions. The Soviet intelligentsia scorned the “Vietnamese propaganda” or “Egyptian nonsense”; such movies were offered for a reduced price in addition to the desired Western premiers. Today, however, such a stand would seem unwise at the very least. Iranian, Thai, and Chinese films are acknowledged hits, and from the modern point of view, the Moscow Festivals of the 1960s were a treasury of art-house cinema.

Very popular and warmly received by the international cinema community, the festival welcomed renowned guests like Gina Lollobrigida, Catherine Deneuve, Robert de Niro and Richard Gere. When Federico Fellini won the prize for his “8 ½” in 1963, he said, “I have 270 international awards, but this one is the most precious to me, because I got it in a Socialist country, in the Soviet Union.”

Toward the 1990s, however, the Soviet Union was losing its novelty, while at the same time the country started to plunge into economic chaos, the conditions of which were not at all favorable for the movie industry. At the time the festival was having a hard spell, barely surviving the ceaseless conflicts between the sponsors.

Today the festival has regained its popularity and significance, becoming one of the most important of Moscow’s annual artistic attractions.