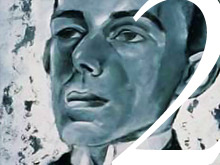 On August 2, 1938, Russian poet Osip Mandelstam was arrested for the second time. He was charged with “anti-revolutionary activity” and sentenced to five years in a labor camp in Russia’s Far East region of Kolyma.

Probably the most courageous poet of the 20th century, Mandelstam dared to say what many people living under Stalin’s rule felt but could never express, even in the privacy of their own homes. His arrest came just months after he returned to Moscow after serving his first sentence in exile.

The first time the NKVD (predecessor of the KGB) came to his home to arrest him was in 1934. A derogatory poem about Joseph Stalin, 16 lines in length, was responsible for his imprisonment. This is an extract of the epigram that has become known as “The Stalin Epigram”:

We live, not feeling the earth beneath us
At ten paces our words evaporate.
But when there’s the will to crack open our mouths
our words orbit the Kremlin mountain man.
Murderer, peasant killer.

His fingers plump as grubs.
His words drop like lead weights.
His laughing cockroach whiskers.
The gleam of his boot rims.

Although it was never published, Mandelstam often recited this poem to his friends, one of whom eventually informed on him to Stalin. The epigram can be characterized as a suicide note. During Stalin’s Great Purge, thousands of writers, intellectuals and artists were charged with “anti-Soviet activities” and then exiled or executed. However, Stalin gave instructions to “isolate but preserve” Mandelstam, and he was banished from major cities and sent to live in Voronezh together with his wife Nadezhda.

While in Voronezh, the government continued accusing him of having “anti-Soviet” views, even after Mandelstam wrote his “Ode to Stalin” glorifying the dictator. The ode did not save him from being arrested again and exiled to Kolyma, although it may have saved his wife, who stayed behind.

“Poetry is respected only in this country – people are killed for it” Mandelstam once said to his wife. His death on December 27, 1938 in a camp, proved his own remark. The Soviet government reported that he died of heart failure, but many believe he died from starvation.

After the end of the Stalin era, Mandelstam was rehabilitated in 1956, and all the charges against him were dropped. His volumes of poems include Stone (1913), Tristia (1922), The Noise of Time (1925), and a collection of essays, The Egyptian Stamp (1928). After Mandelstam’s death his wife Nadezhda wrote about their experiences of living in the Soviet Union during the 1930s in her books “Hope against Hope” and “Hope Abandoned”. (Nadezhda is the Russian word for “hope”)