The term “zemsky sobor” is translated as “assembly of the land”. In the 16th–17th centuries, it was an assembly of different social class representatives, which gathered usually on the Tsar’s orders to discuss important political and economic questions. It can be called first Russian parliament.

The first Zemsky sobor, known as “The Sobor of Conciliation” was gathered by Ivan IV (who had not yet received the name “Terrible”) in 1549. Russia had just become a unified state, not a patchwork quilt of feudal lands, and it was necessary to strengthen governmental power and to change the way of ruling the country. This Sobor discussed a new body of laws and other reforms presented by the tsar.

The functions and structure of the Zemsky sobor changed throughout the ages. In different times, it had been a tool to approve the Tsar’s decisions, the main legislative power in the country, and a “marionette theater” of foreign invaders. However, many things remained the same long enough to be called distinctive features of the Zemsky sobor. 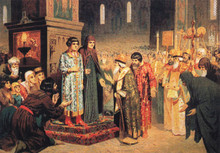 "The election of Mikhail Romanov to the throne" by A. Kivshenko

Usually, the Tsar called for Zemsky sobor to be assembled. When it was necessary, the government sent a letter to all the regions of Russia, describing the agenda of the assembly and asking for some number of representatives to be elected and sent. The representatives were to be noble people, who paid taxes and/or worked for the state. So the zemsky sobors consisted of merchants and nobles. Church hierarchs would also participate in sobor meetings without election. But the largest social class of ancient Russia, – peasants, – joined the sessions only twice in zemsky sobor history.

Zemsky sobor sessions could last from several days to several years, so the representative had to take a lot of luggage with him. This, and the work of representative being unpaid, stopped the poor from joining election campaigns.

The last zemsky sobor took place in 1684, where absolute monarchy was established in Russia. There were 57 zemsky sobor meetings from 1549 – 1684.