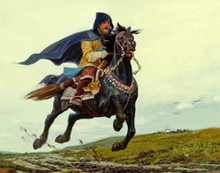 Knights of the evil mind

It was conceived as a reform, yet became one of those intentions that paved the way to hell. Born out of paranoid fear of one individual, Tsar Ivan IV, oprichnina policies claimed tens of thousands of lives in the 16th century Russia, setting a ghastly high bar for campaigns of state-instituted terror that would befall Russia in coming centuries.

The term oprichnina comes from the word oprich that means “put aside” or “special”. It was initially used to denote payments to widows of noblemen after their death.  Ironically, when oprichnina policies took over the country, this spouse-supporting merciful connotation was all but abandoned. Oprichnina came to mean mass torture and death, a meaning it retains to this day.

Although the events that created, and eventually ended, oprichnina are well known, the underlying motives and causes are still a matter of debate.

By the mid-1560s, the tortured mind of Tsar Ivan IV, later nicknamed “Ivan the Terrible” for his savage track record, was ridden by paranoid suspicions. His much beloved wife died years before, with his grief further amplified by the belief that she was poisoned by the boyars, the Russian nobility.

Years before that, when the then-young Ivan IV suddenly fell ill, some of the boyars refused to pledge allegiance to his new-born son. Seeds of mistrust had grown into full-blown paranoia, and by 1564, when Russia was losing the Livonian war and prominent nobles were defecting to the opposite side, the Tsar became confident other aristocrats were also ready to betray him.

Moscow Embassy in the Alexander settlement by Pyotr Tselebrovsky

A frequent hostage of conspiracy theories, Ivan IV was also a shrewd master of intrigues. He concocted his own scheme that he believed would bring his traitors out in the open. He announced about his intention to abdicate and promptly left Moscow with much of his treasure and only a few trusted associates. They went to a monastery in Alekandrova Sloboda, a small, but fortified town to the north. Ivan IV cut all the incoming communication with his court. When word spread that the Tsar had to leave Moscow, it caused uncomfortable uncertainty among ordinary folk, so a content Ivan IV fired off two letters.  In the first he attacked the boyars and the church, accusing them of treachery and foul play. In the second, he reassured ordinary people that their God-anointed Tsar still cared for them.

As the power vacuum escalated, several envoys were sent to Alekandrova Sloboda to beg the Tsar to return to his sacred duties. After playing hard-to-get for a while, Ivan IV consented to return but on several conditions. He would create oprichnina, a territory within the Moscow Tsardom, governed solely and absolutely by him. He also wanted to have the power to prosecute traitors as he deemed necessary. Under pressure from the church and the people, the Council of Boyars agreed.

The street in the town: the set to the opera The Oprichnik by Pyotr Tchaikovsky, 1911. Apollinary Vasnetsov

When Ivan returned to Moscow in 1565, he divided the country into two parts, that is, oprichnina, which was to be his private domain, and zemshchina, which continued to operate under the existing governmental and legal institutions.

According to different estimates, between one third and one half of the Moscow Tsardom became oprichnina. The Tsar could add to it any land or property he wished and he primarily chose wealthy and important areas in the north. Moscow was carved up street by street, and sometimes building by building. Existing landowners were sent packing, and their fates varied from resettlement to execution depending on their perceived loyalty to the Tsar.

All the Tsar's men

Oprichnina was run by the Tsar's own guards, the oprichniks. Drawn mainly from the lower levels of the military and society, they were rewarded for their services with land, property and payments. The result was a small army of individuals whose entire livelihood was owed to Tsar's generosity and whose loyalty was without question. According to sources, the number of the oprichniks grew from 1000 to 6000 between 1565 and 1572, and included some foreigners.

This force featured very few boyars, which led many historians to conclude that Ivan IV envisioned the oprichniks as a hand-picked nobility designed to replace or at least undermine the influence of the boyars. Western historians speculated that the oprichniks were ancestors of the KGB, the secret police of the medieval Russia, though they had all the authority to carry out their functions in the open.

The oprichniks are frequently portrayed as unhinged black-robed killers, who slaughtered people just as frivolously as they killed dogs whose severed heads they carried around as a symbol of their 'snapping at the heels' of the Tsar's enemies. Entrusted with a goal of clearing the country of traitors, they preferred black in everything – from their cloth to the color of their horses – and reportedly carried around brooms as another representation of their campaign to sweep away traitors. 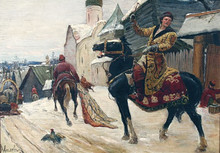 The terror of oprichnina is well documented. In 1570, Ivan IV sent the oprichniks to attack the northern city of Novgorod, a political rival of Moscow, which the Tsar believed was planning to ally with Lithuania, the state at war with the Moscow Tsardom at the time. Using forged documents as a pretext, thousands were hanged, drowned or deported, while the buildings and countryside were destroyed and burned-out. Estimates of the death toll in the Novgorod massacre vary between 15,000 and 60,000 people. Soon after came a similar, though less brutal, sacking of Pskov, an important trade center at the time.

Contemporary scholars suggest that Ivan IV may have suffered from a range of mental disorders, including bipolar disorder. This condition, which is also known as manic depression, involves both depressed and manic episodes. They may be experienced in different ways, but are usually associated with fits of high energy. In case of Ivan IV, it was manifested in his restlessness in pursuing enemies, as well as episodes of high energy when he threw cats and dogs out the Kremlin windows.

Another indicator of his bipolar disorder was his ability to go from unabashed killing frenzies to prayers and fasting in a monastery. During one such period, the Tsar ordered the creation of a new monastic order, which was to draw its brothers from the oprichniks. Though oprichnina as an institution was relatively short-lived (1565-1572), not allowing for the creation of a church of sadistic monks, scholars say the new order became a useful instrument in blurring the lines of authority between the church and the state.

Alternating between periods of savagery and piety, the Tsar was greatly concerned with the church's assessment of his policies. With the oprichniks having free run of the country, churches and monasteries became the last refuge for those fleeing the persecution.

The conflict between the church's proclaimed mission and the state's actual policies was exacerbated during the reign of Metropolitan Phillip.

A confidante of the Tsar from their younger years, Philip initially made his ascension to the church's leadership conditional on the Tsar's abandoning oprichnina altogether, but later accepted the offer on the premise that he would be able to persuade the Tsar to change his ways through persistent sermons. 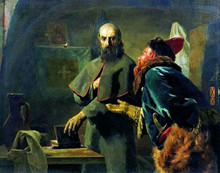 The death of Metropolitan Philip by Nikolay Nevrev

Yet, despite all Phillip's efforts, the violence continued unabated. Having exhausted all his means, Philip gave a sermon in one of the Kremlin's cathedrals in which he preached before thousands of people about the need to abolish oprichnina. This violated the Metropolitan's pledge of non-interference in the Tsar's affairs and he was later persecuted by the oprichniks during their raid on Novgorod.

Like many organizations that rule through terror, the oprichnikis soon went after each other. Internal quarrels and rivalries led many oprichniks to accuse each other of treason.

Internal conflicts were compounded by external threats. In 1571 an army of Crimean Tatars devastated Moscow, burning large tracts of land and enslaving tens of thousands of people. With oprichnina failing to defend the country, and growing number of oprichniks implicated in treachery, Ivan abolished it in 1572.