The production of the purest and seemingly most simple of all alcoholic drinks – vodka – involves the relatively complicated process of distillation. So, it wasn't invented until the 15th century. But vodka’s relative youth (it is about 8,000 years younger than wine) didn’t prevent it from gaining widespread popularity in Eastern Europe and Russia.

The difficulty of growing grapes in a cold climate drove these counties into exploring the alcoholic potential of fermented grain. These explorations led to the discovery of what was called then called ‘bread wine’. It was first distilled at a Muscovite monastery and then, apparently, in the city of Moscow itself in the 1440s. Traditional Russian surnames Vinokur or Vinokurov are derivatives of the Russian word for the distillation process.

Dmitry Mendeleev Dmitry Mendeleev Despite beliefs to the contrary, Mendeleev – the legendary Russian inventor known as the ‘Euclid of chemistry’ – didn’t actually invent vodka, which existed about 400 years prior to Mendeleev’s birth. However his thorough and careful studies have greatly contributed to the distilling industry. 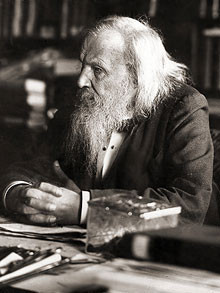 The two most notable names in the history of vodka are Dmitry Mendeleev and William Pokhlyobkin.

Mendeleev became a Doctor of Science in 1865 for a dissertation called “On the Combinations of Water with Alcohol”. It’s a unique example of a work on spirits by a scientist of Mendeleev’s caliber, and, unsurprisingly, it has one or two useful ideas.

When appointed Head of the State Bureau of Weights and Measures in 1893, Mendeleev had to come up with vodka production standards. Naturally he didn’t forget his alcohol studies made 30 years earlier, which indicated the ideal volume for vodka to be 38%. But for the purposes of easier marking and taxation, the 40% volume was chosen.

Vodka’s very existence caused an international controversy in the late 1970s (of course its usage has caused infinitely more controversies), when Poland tried to claim that within the borders of the Kingdom of Poland, vodka was known prior to the Russian Empire.

Years of painstaking research by historian William Pokhlyobkin confirmed that vodka was in Muscovy in the 15th century, while Poland was unable to prove the statement that the local vodka (gorzalka) was created prior to the middle of the 16th century.

Russia clearly won the international dispute on the invention of vodka and rightfully keeps it as its national drink.

Being the national drink of a country as vast as Russia, vodka has created dozens of different traditions. While some prefer to drink it around the table, others see vodka as a universal short-term relaxant that can be consumed virtually anywhere with little preparation.

There are people who enjoy vodka and there are those who suffer from ulcers. So, if you have no desire to pass from the first group to the second follow the advice below. Before a proper vodka session (one that involves more then 200 milliliters of vodka per participant) you have to take precautions. And don't underestimate the importance of 'zakuska'.

Vodka – a drink for all occasions

Russians often joke, “We eat vodka.” Since its invention, vodka has been used in Russia as a medicine, antiseptic and cosmetic remedy. Vodka used to save lives, especially during World War II, when no other antiseptic was available. It was also widely used after the Chernobyl nuclear power plant blast to clear a person's body of radioactive nuclides. And nowadays, vodka is widely used in everyday life in medicine, as a cleaning substance, for cosmetic use and in cooking.