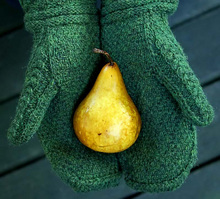 
Although some sources claim George Washington invented the glove with one sheath for four fingers and one for the thumb, northern peoples have used mittens since ancient times. Slavs are thought to have imported mittens along with northern warlords Varyags, who sometimes robbed and sometimes conquered and ruled Russians of yore.


The Russian word for mittens – varezhki – means Varyag hand garment. A less popular version traces its etymology to the word varit (to boil), as craftsmen boiled leather mittens in wax and similar solutions to make them stout.

Varezhki were worn mostly by peasants, as wealthy nobility, the boyars, preferred to hide their hands from the cold in long sleeves. And after Peter the Great reformed the country so it was more like Europe, the new elites switched to “fingered” gloves. However, fingerless gloves, mitenki, remained and are worn by women to this day. 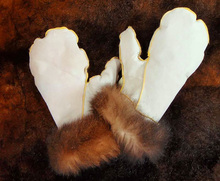 People used leather or cloth mittens for work and fur or woollen mittens for warmth and beauty. In colder areas, like the Urals or Western Siberia, they wore two pairs of mittens at once, woollen ones to keep the warm air in and leather ones over them to fend off snow.

In some regions a girl was expected to knit a pair of mittens as part of her dowry to prove her housewife’s skills. Patterns decorating mittens had sacral meaning and were meant to protect the owner from evil spirits and diseases.


Today varezhki still hold a special place in the life of many Russians. Both adults and children use the garment, which is still cherished for its practicality. A typically Russian invention is tethered children’s mittens, to prevent the child losing his hand protection. The tether is usually made of a rubbery cord, drawn through the coat’s sleeves so that the mittens remain attached even when removed.

A mitten for a toy


Varezhka is also the name of a well-known Russian children’s animation film. Released in 1967, the stop motion drama is a heart-rending story, told without a single word but with a brilliant piano soundtrack. Several generations of Russians have shed tears of compassion for the main character, a little girl, imagining her mitten into a puppy, after her mother forbids her from having a real one.