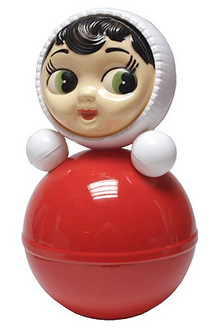 “Weebles wobble but they don’t fall down!”  was the famous catchphrase from the American roly-poly toy coined in the 1970’s. However, even though it was the middle of the Cold War, roly-poly toys were busy wobbling and standing up in the Soviet Union and the Eastern Bloc, too.

The Nevаlashka or Vanka-Vstanka doll of Russia was just one incarnation of the popular egg shaped toy which, with a weight in the bottom was pushed by a child then wobbled back to a stand.

Most households during the Soviet Union had a Vanka-Vstanka for the children to play with. It was also a popular boy’s name meaning, ‘get up!’ which is precisely what it did! Roly-poly toys have entered cultures around the world. In China, they’re often designed as a clownish caricature of a local official, mocking the ineptitude of local bureaucrats. One theatre group dresses up an actor as a roly-poly toy for the audience to interact with. And the author Enid Blyton created the characters Mr and Mrs Wobblyman based on the swaying playthings.

With a bell inside ringing to the child’s pushes, Vanka-Vstankas, and their worldwide incarnations remain popular toys to this day.