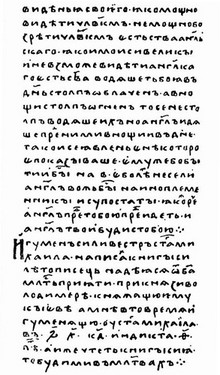 Letopises were the life chronicles of the Ancient Rus and other Slavic states that existed up until the 17th century. They were usually written by highly educated monks.

Letopises are the only historical source for Ancient Rus scholars – they describe systems of power and relations between Slavic tribes and the rest of the world. It is the one and only tool to define the age of a city or township. The year the city appeared in a letopis was considered the year of its foundation.

Many researchers consider the letopis a genre of ancient and medieval literature. The text of the letopis is usually divided into articles that correspond to a certain time period (they were usually written on an annual basis). Some of these chronicles contain the history from the very beginning – from the events of the Bible through Rome and Byzantium to life in Rus. Researchers also admit that letopises were the main tool to glorify the power of the princes in Kievan Rus. The main topic of the chronicles is the call for the unification of all the lands in Rus. More than 1500 chronicles from the 11th to the 17th century have been discovered by historians.

In some letopises you can find not only real life events, but also references to divine and magical powers as well as excerpts from byliny – ancient Russian narrations about the life and heroic deeds of the country’s strongmen. But one can’t help admiring how the monks managed to blend together these legends with the laws, regulations and orders of the princes and other real events that took place in a given year. The laws of the country and the deeds of Russian princes – like the words of one of the most prominent Russian princes Vladimir Monomakh – have survived thanks only to the letopis.

It is important to understand that letopises do not belong to one person – all the scribes relied on the work of their predecessors and on oral stories. One of the most prominent letopis scribes was Nestor, a monk from the Kiev Pechersk Monastery. Before he set off to write his letopis he thoroughly acquainted himself with three sets of chronicles: 1037, 1073 and 1093. Thanks to these collections of ancient Russian life he managed to portray the process of the creation of the Russian state. He described in great detail how Prince Vladimir selected the religion for the whole country, how he pondered the pros and cons of Christianity and Islam. His letopis – the “Tale of Bygone Years” – became a symbol of this kind of writing. Here’s his first line that became iconic over the years: 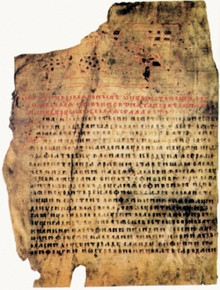 The Primary Chronicle by Nestor the Monk

Nestor also pronounced a very nice phrase about the role of books in the development of society: “Great is the benefit of book learning, for books point out and teach us the way to repentance, since from the words of books we discover wisdom and temperance. This is the stream, watering the universe, from which springs wisdom. In books is a boundless depth, by them we are comforted in sorrows, and they are a bridle for moderation. If thou do enter diligently into the books of wisdom, thou then shalt discover great benefit for thy soul. Wherefore that one who readeth books, doth converse with God or the saints."

Many dramatic events were reflected in the “Tale of Bygone Years” such as: the talks of Prince Oleg with Constantinople and his death from a snake bite in the 9th century; various murders of princes in ancient times; preparations to repel invaders of the Russian land.

The tradition of chronicles was quickly developing in other parts of the country. Lavrenty – a monk from Suzdal – expanded the “Tale of Bygone Years.” He gave a thorough account of the Russian princes battling the Cumans that were attacking Slavic territories from the south and the east. In his letopis the scribe could not do without a reference to divine powers: “So God delivered the Cuman troops into the hands of ours” - that is the final line of the chapter that depicts the decisive battle.

This is a fine example of typical letopis writing. The scribe doesn’t interpret events and never tries to analyze them. Everything that happens to the country is explained by the will of God. And each major event for the scribes is an echo of the past. Some historians think that all these chronicles were written not for the people but for presentation on Judgment Day.

The 1237 invasion of Russian princedoms by Mongols and Tatars that lasted for more than two centuries led to a decline in letopis writing. Though some monks managed to continue their work keeping track of all the crucial battles of the time. In the 14th and 15th centuries – when the Russians took over – the tradition of chronicles was given a new push. The cities of Moscow, Tver and Novgorod became the new centers of letopis writing. However, the chronicles of this period mostly dealt with local issues – such as births and deaths of princes, selection of local executives, local feuds, harvest, famine and natural phenomena.

From a historic perspective, one of the most famous chronicles of this time is “Troitskaya.” It sums up all the tragic events that occurred in the country from the 13th to the 15th centuries.

Moscow became not only the center of the Russian state, but also the center of letopis writing. In the manuscripts of that epoch we can see many features of the policies of the Russian princes of that time. However, some of these chronicles were lost three centuries later in the great fire of 1812 – during the war between Russia and France, led by Napoleon.

Another feature of the letopis was the inclusion of personal accounts of important journeys and quests. For example, the recollections of Afanasy Nikitin, a merchant from Tver, who undertook a six-year journey to India, from 1466 to 1472.

In the 17th century the letopis genre started to die out. The only prominent chronicles of that time dealt with the conquest of Siberia.

Today the word letopis means a “biography” or a “story.” But it is often misused – for example, the “letopis of the car-making plant” makes many of scholars smile; obviously it has nothing to do with the epic character of the ancient manuscripts.

Dukhovnost Dukhovnost’ is the Russian understanding of the spiritual potential of a person that boosts his intellectual and moral development on the road to success.

New economic policy (NEP) New Economic Policy (NEP) was a number of economic measures, that managed to drag an entire country out of starvation and chaos.