Of Russian origin: The Ilyich Lamp 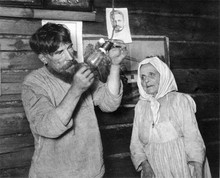 What hides behind a romantic term, “the Ilyich lamp” is in other words a household incandescent lamp with a socket freely hanging from the ceiling without any shade or abat-jour. In other words, totally unromantic. However this simple appliance has quite a story behind it…

It was invented by Russian scientist and engineer Aleksandr Lodygin. In 1872 Lodygin submitted application of the patent for his lamp, two years later he got papers for the technique of producing cheap electricity and devices for cheap electric illumination. Lodygin’s incandescent lamp got patents in many countries. Edison improved the invention of the Russian engineer six years after the first Lodygin lamp illuminated streets of St. Petersburg. However, Lodygin was too busy with his other ideas to fight for world glory. Now the whole world knows Edison’s lamp, while Lodygin’s name is primarily forgotten. Even Soviet Russia used the same device under a different name: The Ilyich lamp.

The first ever Iliych lamp was lit up by a d.c. generator in a small village of the Moscow region in 1920. Kashin (the name of the village) would have remained unknown if it hadn't been for one day in its history when Lenin came over and the first ever rural electricity generator was launched.

The visit was preceded by a whole chain of events. A local blacksmith, envious of Muscovites, who boasted of electricity in their homes, had had a brilliant idea of building a small local electric station in his tiny village. The whole village took part. The problem emerged towards the end of the construction – a d.c. generator was nowhere to be found. One of the project leaders decided to go to Moscow and somehow managed to get through to Lenin. The issue was solved. Happy villagers decided to celebrate the project completion and sent an invite to the Kremlin, “…we would like you to attend the launch of electric light in the village of Kashino and share with us the joy that we feel when seeing electric light in village huts that peasants couldn’t even dream of during the Tsarist times. Your presence would be highly appreciated”. Lenin was so impressed by the peasants’ will to electrify their homes that he promised to pay them a visit.

On the 14th of November the whole village was upside down. Women cooked and baked, men cleaned the roads and yards, everyone shook the dust off their smartest clothes and regular curtains on the windows were replaced by clean ones. Despite tough times, there was even beer ready for Lenin – distilled from beet root. Everyone held their breath: would the world’s proletarian leader stand them up? To everyone’s thrill, Lenin kept his promise and came.

When darkness fell, the whole village went alight. Lenin said: “And this is just one village. For us it’s important that the whole country is flooded with light”. Then he left.

But the memory stayed with the people – every house proudly hanged a group photo with Lenin on the wall and they tenderly called their electric bulbs “the little Iliych lamps”. The name stuck as it became a symbol of the Soviet people’s achievements, making their life lighter and brighter.

Nowadays Ilych Lamps are usually mentioned in connection with the so-called GOELRO plan – the plan of a major restructuring of the Soviet economy based on the total electrification of the country. (GOELRO is the transliteration of the Russian acronym for "State Commission for Electrification of Russia). Lenin was behind the plan and took its implementation close to heart - he believed it would eliminate the gap between the rural countryside and cities. So when the Soviet Union became widely wired up with light bulbs, they enlightened and changed millions of peasants’ lives, speaking the language of Soviet propaganda. Along the same lines, calling them the Ilyich lamps was a way of remembering the man who had brought the future into backward Russian homes.

With time the term changed its flavor, assuming a note of sarcasm - as lamp shades were still as rare as electricity. Time was turning the Iliych lamp into a symbol of poverty.

Witnesses say in the 1950’s life in the USSR was still primarily lived under the light of a petroleum lamp and electric light remained a dream for Soviet people. Where was the Iliych lamp then? It was right there - on the ceilings of many houses. Just as 30 years earlier - no lamp shade – a simple bulb on a curled up wire. Most of the time – it wasn’t giving any light.

Why? For various reasons. The town of Oryol, for instance, was almost fully destroyed by the Germans during the Second World War. And the electric plant that had been blown up didn’t work for a long time after. The town was getting its energy from a railway mobile power plant – its sole source of energy, primarily routed to factories being restored and offices. Energy was scarce. So homes were somewhere towards the end of electricity distribution list. All evenings were the same: an oil lamp was burning while the Ilyich lamp was hanging right above it, flyspecked and begrimed. People would look at it with hope from time to time – maybe today would be the day for electricity to get going. Sometimes the lamp really started blinking and became slightly brighter – to everyone’s joy. The oil lamp was turned down to the minimum – but not fully – not to spare an extra match. There was no certainty electricity would stay for the rest of the evening. As if in response to that, the light bulb started blinking, its brightness faded and the Iliych lamp went out. The more reliable oil lamp was lit up fully again. This could repeat several times in an evening. Only by the mid 1950’s was electricity was fully restored to provide stable lighting to all the living houses.

All this was less than a century ago and people remembering those times are still alive. However every day takes away some of those who can tell the stories of a humble lamp that is today taken for granted.