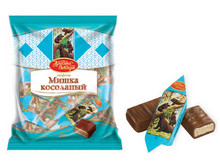 It’s one of the sweetest memories of a Soviet childhood. A bag of sweets that all school kids got as a New Year gift, and inside it, among lollypops and tangerines, were a few candies made of real chocolate. Little Squirrel, Golden Hen – the treats were often named after characters of the Russian tales. And while for the chocolate-starved Soviet kids they all tasted great, at the top of this sugary ecosystem was one unchallenged favorite, the Clumsy Bear.

Despite its title, the Clumsy Bear candies were and still are the epitome of confectionary elegance. On its wrapper, four bears are playing around a shuttered tree as depicted by the great Russian painter Ivan Shishkin.  The wrappers themselves were collectables, some of the oldest versions nowadays cost more than a pack of candies.

And inside, below a layer of milk chocolate were two waffles with almond filling in between. With 531 calories in 100 grams, the treat presented a considerable threat to waistlines, yet dietary concerns were often abandoned as not many people in the Soviet Union could binge on the Clumsy Bear. In the Soviet Union, with its chronic shortage of everything, portion control was not a matter of will power. The state did it for you. Shops would only sell 300 grams of the candies per person, and since supply was very unreliable, most families would tuck the candies away for some special occasion, especially the New Year.

It’s believed that candies similar to the The Clumsy Bear were hand-made since the late 19th century. Their first industrial production began in 1925 by the Krasny Oktyabr (Red October) factory. And while many confectioners nowadays produce candies by the same title, the Red October version still remains Russians’ favorite.