Druzhina is usually simply translated as “the retinue of a Slavic prince”. In fact, although the name remained the same, the nature of the druzhina changed many times over the centuries, and is still hotly disputed by historians today. One thing is clear - understanding the druzhina is key to figuring out how Russian princes lived, fought and controlled their domains throughout the Middle Ages.

From the 6th and 7th centuries, as Slav tribes grew from small chiefdoms organized by kinship into bigger societies that required more sophisticated management, their structure changed. No longer just villagers, the inhabitants of these principalities stratified into different classes with various roles. A Slav knyaz (prince) needed a force to back up his authority, and the warrior class that emerged to address that need formed the druzhina. Numbering only a few hundred, these were elite warriors, equipped with armour and heavy weapons that were rare at the time. The knyaz fed and often shared quarters with members of the druzhina, the druzhinniki. In return, they served as his bodyguards and followed him in his raids and sieges, often given a share of the spoils. They were free men, and theoretically could leave the service of the knyaz at any time, though in reality, the dissolution of the druzhina was likely to happen when their leader died or lost power.  Although not exactly the same, their Western equivalents were Scandinavian housecarls.

As there is speculation about the role of the Varyags – Norse Vikings  - in colonising Russia and playing a major part in its formation as a state, so there is about their participation in the druzhinas. Some historians have argued that the druzhinas were largely made not of native Slav tribesmen, but of Norsemen who served in them willingly, in the hope of economic gain.

After the turn of the first millennium, it became more profitable for the knyaz to cultivate land than to simply collect tribute, and the role of the druzhina changed accordingly. Now, the knyaz would gift his druzhinniki land from conquest, in turn they would be assigned to collect taxes and gather their own armies in times of war. This was feudalism, and the druzhina became the warrior nobility, administrators as much as fighters.  No longer dependent on the knyaz’s hospitality, and with control of their own fiefdoms, the druzhinniki gained much more autonomy than previously, but were no less important. Although technically their lord, without their endorsement the knyaz was powerless, and the druzhinniki were often more partners than vassals.

Around this time, the druzhina developed a more formal hierarchy. The top landowners and military leaders – those close to the knyaz himself – became the boyars, and formed the elder druzhinas. These would hold council with the knyaz himself and take part in all of the strategic decisions. The younger druzhinas were left with the traditional duties of guarding and fighting for the knyaz, but were given new responsibilities as court officials and fine collectors.

The feudal system, of which the druzhina was a large part, played an important role in the splintering of Russia into fiefdoms, which was one reason the country was easy prey for the invading Golden Horde in the 13th century. Nevertheless, the Boyars – the highest noblemen who emerged as part of the druzhina - remained a key component of the Russian state until the 17th century. 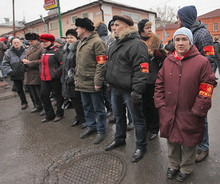 The "druzhina" at the Bolotnaya square meeting on December 10,  2011 (RT Photo / Irina Vasilevitskaya)

Used in a non-historical context, druzhina is used to describe any group of powerful men united by a single purpose. The word druzhinniki also acquired a different set of connotations when it was used to describe members of the People’s Voluntary Militia, a Soviet-era organisation in which ordinary citizens would be charged with providing public order and even given powers to discipline and arrest ordinary citizens. The untrained druzhinniki, often strong-armed into joining by their employers, were regarded by some as creating as many problems as they solved.