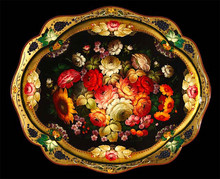 Zhostovo is a world renowned style of painting on metal trays. If you’ve ever eaten fruit off a black metal tray and thought the vessel more interesting than your food, then it’s probably a Zhostovo!

The name is derived from the town of the art form’s zenith, in the Moscow Region. It wasn’t the birthplace of the art form, but became the place where its elements came together with the masters of its craft. The center of metal tray production in 18th century Russia wasn’t Zhostovo but the Ural mountains.  There it’s said a peasant craftsman called Khudiakov from Nizhny Tagil began experimenting with oil lacquer to cover his trays. An old problem was that any decorations painted onto trays would quickly crack off. The lacquer he came up with could be spread over any painting and would protect it whether it was on an iron, copper or wooden tray surface. Other such lacquers had been invented separately in England and China but this was one of the best. Khudiakov handed the secret down to his sons who were able to paint bright flowers and butterflies onto trays and keep them there. They soon added other subjects to their decoration and trays from the Ural workshops began to be sold all over Russia. The art form was off! 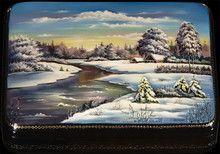 In 1825 workshops in the town of Zhostovo were also making trays but from papier mache, not metal. However they soon started forging metal ones using the techniques developed in the Urals. In the 19th century the demand for trays rose as a result of the growth of cities and the expansion of the network of hotels, eateries and bars, where trays were used both for their immediate purpose and as interior decorations. It was this new market that enabled the Zhostovo painters to establish themselves as a distinctive tray-making industry. Every tray was usually handled by three craftsmen - a smith, who forged and hammered out the tray, a spatler, who covered it with a base material to paint on, and a painter. After the tray was dried, the spatler covered it with lacquer. In the beginning the workshop master and members of his family worked on par with other employees.

They took into account the experience of other production centers, but instead of merely borrowing the shapes and techniques they liked, they reworked them into their own style. Over the century, the expertise of the craftsmen at Zhostovo developed with paintings of flowers, fruits, nature, landscapes and folk scenes. Their work became famous in Moscow, St. Petersburg and Nizhny Novgorod.

The Zhostovo masters admired the work of St. Petersburg trays and learned from them the art of decorative still life, adapting it to fit their own wares. Along with absorbing some of the techniques of other tray-makers, the Zhostovo craftsmen primarily tried to develop their own, local traditions. Zhostovo tray-making was born of the miniature lacquer painting craft that was practiced in villages and towns around Moscow, and that umbilical cord was not cut for a long time. Until the 20th century trays and lacquered wares were produced in the same workshop and painted by the same masters. Even after tray-making had spun off as a distinctive industry, the Zhostovo tray painters continued to improve their techniques on old style papier-mache boxes while using the same lacquers and oil paints. 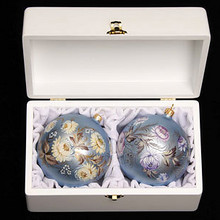 The Zhostov enterprise went through a slump the 1910’s. The demand for trays fell, and production shrank. Painters and smiths started leaving for other incomes in farming or seasonal work. It was only in the 1920’s, with the revival of folk crafts across the country that they reemerged around Zhostovo. A proper tray painting factory was established there in 1928. But it was a factory with a difference. Although there was an assembly line, no two trays were to be the same. Individualism and improvisation are the watchwords of Zhostovo art.

Master painters of the past have been relied upon to pass on their knowledge. Today's Zhostovo masters, of whom there are only seven in the entire world, are artists from generations of family dynasties. The families of Belyayev, Kledov, Antipov, Saveliev, Gogin and Vishnyakov have produced masters awarded the honorable title of the Merited Artist of Russia, and who are members of the Artists' Union, have been decorated with medals of the Academy of Arts, and have won diplomas and awards at numerous exhibitions of different levels. Their works are stored as a national treasury and exhibited by major national museums. Within this dynastic grouping, ‘apprentices’ can start their training as early as age two. By being given brushes, oils and materials to play with, children are exposed to the wonders of art. The most promising are then taken on for further attention. 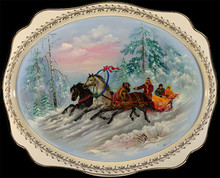 By the time an apprentice becomes a master they have the ability to turn a domestic utensil into a work of art. They paint many things, but flowers have become synonymous with their art form. Arranged into bouquets, wreaths or garlands, they form the centerpiece to the majority of the trays. Studying the forms and structure of flowers, each artist is intimately aware of the flora they paint, but deliberately mix in unrealistic elements of fantasy to embellish their creations. The Zhostovo craftsmen all work in a constant balance, seeking always to combine traditional methods and themes with improvisation and the individual flare of each master. They use no stenciling or guidelines. Each tray is a one off, similar in style but always different to ones before it.

A President's Decree on the 6th of November 1993 included Zhostovo Folk craft into the State index of the most valuable cultural objects of The Russian Federation. Today Zhostovo employs 240 artists. Their trays past and present are displayed in museums and galleries the world over. Each new creation still has close bonds to its past, and the craftsmen insist that each tray is both the same and different from its forbears, saying it can be, “compared only with music.”