Propoganda poster, that reads "Let us gather vast crops from the virgin lands", 1954

The Tselina, or the “Virgin Lands Campaign” was 25 years of human effort to feed the Soviet Union after it had been devastated by WWII.

After the Trans-Siberian Railway (the longest network in the world) was constructed, Moscow was connected with Russia’s Far East and hundreds of hectares of untouched soil in between became easily accessible. This is when Nikita Khrushchev, then the Soviet leader, launched a high-scale campaign to fertilize the great expanses of the unsown lands of the USSR. “The Virgin Lands Campaign” began in 1954 and spread mainly over the north of the Kazakh Soviet Socialist Republic (currently Kazakhstan). In 1961 the Kazakh city of Akmolinsk was renamed Tselinograd, literally “Virgin Lands City” and became the center of the campaign. Today the former capital of the 25-year-long campaign is the principal city of Kazakhstan, the richest country in Central Asia. 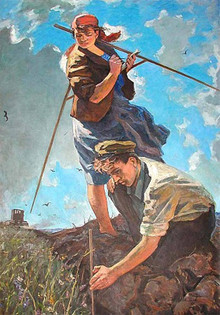 After the end of deadliest war of the century, USSR had no money to feed its people. The Soviet Union needed 32 million tons of grain a year, but couldn’t produce enough on existing fields. So the untapped soils back then seemed an easy solution.

People from Russia, Ukraine and other Soviet republics arrived in the region to join the sovkhozes (Soviet state-owned farms). Hundreds of such farms were created.

Propagandistic posters screamed “Join our farms ” from every corner. Hundreds of thousands applied to join filed works, but a very small percentage of them knew anything about agriculture.  Hungry soldiers, students and teachers became farmers, which many experts today consider to be one of the biggest mistakes of the plan.

In just one year newly converted farmers ploughed 190,000 square kilometres of the deserted lands for the “seeds of tomorrow” (the name of the first of the two novels about Virgin lands written by Mikhail Sholokhov).  Over 150,000 were added later. The first years were a stunning success. The Soviet Union produced about 125 million tons of grain in 1956. Most farms showed 60% better harvests than expected. As long as bread produced from the Virgin Lands wheat remained the cheapest on the market, the USSR was producing per capita twice as much as the West.

Farmers were happy not only to be fed, but also to explore the endless horizons of the biggest state in Central Asia. One of them wrote:

“Once at a college dedicated to a famous Kazakh poet and composer I asked my friend Abdimazhil if he could teach me a quatrain that would mention rivers and mountains of his country. He taught me one and I sang it at the meeting. It was not because I was particularly artistic or wanted to sing. I travelled a lot around the Kazakh Republic during the years of “The Virgin Lands Campaign” and was absolutely amazed by the beauty of the nature and the wisdom of its ancestors. I wanted Kazakh people to know that.”

By the end of the campaign, immigrants outnumbered Kazakhs in many areas of the republic, millions of Russians and Ukrainians stayed forever. 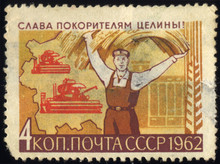 Most sovkhozes of the Virgin Lands grew wheat only. In 5 years, the hungry nation drained the initially not-so-rich soil of all nutrients beneficial to wheat. Loss of the land’s fertility was due to poor, unprofessional planning and lack of fertilizers. No measures were taken to stop the erosion of the once Virgin Lands, and the soil was blown away by the strong desert winds and left dead lands instead.

Despite the Trans-Siberian Railway which made the campaign possible in the first place, the grain didn’t make it to far-away towns where it was most needed. The Soviet Union began to import gain from abroad.

Nonetheless it helped the hungry and devastated Soviet republics to win some time to get back on their feet.

In 1960 Mikhail Sholokhov finished the second part of the “Virgin Soil Upturned” novel, named “Harvest of the Don ”. Both parts are considered to be the most vivid description of the period by many. All farm directors were required to read them. In the 1930’s Sholokhov, who was awarded the Stalin Prize (as well as the Lenin Prize) persuaded Stalin to send grain to the upper Don region, saving thousands lives.

Apart from the epic Novel that is associated with the 25-year-long effort to feed the people, the period is reflected in cinematography, paintings, agitation posters and even space. A minor planet discovered by Soviet astronomer Tamara Smirnova in 1969 was named “2111 Tselina” to mark the 25th anniversary of the Virgin Lands Campaign in the USSR.