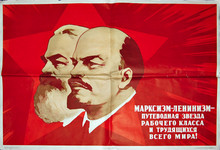 An ideology so powerful, it managed to wipe out faith in God from the minds of millions of people and reform a nation, baptized for nearly one thousand years. Moreover, Marxism-Leninism became somewhat of a new religion to many, strictly following its rules as if they were holy commandments. Over the course of the twentieth century it seemed an invulnerable foundation of a super power regime, and it wasn't only until its collapse that it became clear even the strongest ideologies have flaws. Today, twenty years since the end of the Soviet Union, Marxism-Leninism is still the main ideology in several states, while a number of other countries have transformed it into new, communist-oriented philosophies.

The term Marxism-Leninism originates from the names of Karl Marx (German philosopher, economist, communist and revolutionary, the co-author of the 'The Communist Manifesto', published in 1848) and Vladimir Lenin. It's an ideology combining these two thinkers' ideas, and is often described as Vladimir Lenin's variation of the Marxist ideology. Its name was initially proposed by Josef Stalin after Lenin's death and was aimed to draw a clear line between Marxism and the revolutionary practices of the Bolsheviks (the ruling majority). Later Marxism-Leninism became the Soviet Union's official state ideology, however, after the ideological split-up between the USSR and China, the term started to be used both in the East and West to mark all socialist-oriented parties, organizations and movements around the world.

- the doctrine of the revolutionary communist party playing a key role in society;

- the possibility of a proletariat (working class) revolution and the construction of socialism in any state with poorly developed capitalism;

- the revolutionary role of peasants, countrymen and the national liberation movement (thus the image of a hammer and a sickle);

- the perception of modern capitalism as imperialism; 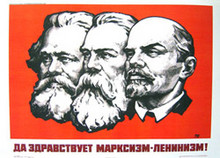 Being the Soviet Union's official ideology, volumes of complete works by Carl Marx, Friedrich Engels (German social scientist, co-author of the “The Communist Manifesto”) and Vladimir Lenin lined up on the shelves of all Soviet libraries, both public and private.

In the USSR, Marxism-Leninism was taught in schools and universities with anyone questioning its beliefs punished. As a result, the ultimate Soviet propaganda machine took control of millions of minds, with the Marxist-Leninist ideology reinforced by the defeat of Hitler in the Great Patriotic War (1941-1945), the first man sent to Space (Yury Gagarin, April 12th 1961) and other achievements by the USSR.

Marxism-Leninism rejected religion. Even before it was officially announced by Stalin, many cathedrals and churches were taken down right after the communist revolution. Some churches were even used to store grain. The ideology's main goal was to establish a world-wide communist regime. The USSR was supposed to become a center to spread the ideology to other nations (at some point this became known as "The export of the revolution"). At the same time, under Soviet plans, Moscow was supposed to become the head of the global communist movement, which eventually became the USSR's main sticking point in relations with other communist states, including China and Yugoslavia. 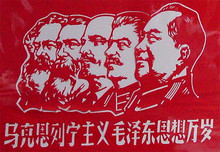 Chinese communists, headed by Mao Zedong, became opposed to the Soviet Union's communist party accusing it of being bourgeois. Soon Mao made his own amendments to the Marxist-Leninist theory, criticizing bureaucracy, praising so-called revolutionary youth groups and choosing guerilla tactics as the only way to bring down imperialism. Maoists took these amendments as a new creative approach to the old ideology, naming the new-born ideological branch Marxism-Leninism-Maoism.

Following Perestroika, on December 25th Soviet leader and the only ever President of the USSR Mikhail Gorbachev resigned from his post, declaring the office extinct. The Supreme Soviet (council), which was the highest governing body of the Soviet Union announced the country's bankruptcy and dissolved itself, thus, opening a new page in Russian history.

Today Cuba, Laos and Vietnam are still officially considered communist states with their ruling parties holding Marxism-Leninism as their official ideology, giving their own different interpretations of the ideology.