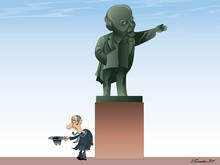 The essence of Soviet mentality

Sovok is a term in Russian slang derived from the word “Soviet.” It is a sarcastic and critical reference to people with an ideology that was widely promoted by the socialist governments of the Eastern bloc. Since the establishment of the Soviet regime, this ideology was seen by many as the only roadmap to build a career, a family and a life in general. It embodied different theoretical streams that originated primarily from Marksist ideologies and were extended by the works of Vladimir Lenin and Joseph Stalin .

As a result it became widely known as Marksisim-Leninism and promoted atheism, labor and the absence of private property, among its main elements. Theoretically, the ideology was meant to lead to the establishment of Communism, which was seen by many as a superior form of social organization. But over the years an increasing number of Soviet people began to realize that Communism was a utopia that, like the global communist revolution, could never be achieved.

As time passed the idea that the Soviet system would create a new, better kind of person began to lose support while opposition increased. Homo Sovieticus (pseudo Latin for "Soviet Man") was a term introduced by the well-known Soviet writer and sociologist Aleksandr Zinovyev and, with negative connotations, it described some of the adverse results of Soviet policies. One of these was the growing spread of indifference among Soviet people to the results of their labor (as expressed in the saying: "The government pretends it is paying us, and we pretend we are working") and total lack of initiative.

The growing spread of carelessness for common property that made theft from the work place almost normal also became an issue in Soviet society. A line from a popular song, "Everything that belongs to kolkhoz, belongs to me," meaning that people at collective farms treasured all common property as their own, was sometimes used to refer to instances of petty theft. According to some sources, this tendency became so widespread that even the so-called Law of Spikelets, which made stealing from the collective punishable by ten years of imprisonment, failed to put a stop to the practice.

Trapped in the USSR

Another factor seen by many as one of the failures of the Soviet system was the isolation from world culture. Tough restrictions on traveling abroad and strict control over the mass media was meant to insulate the Soviet people from Western influence but instead the fact that the “alien” culture was forbidden made it even more attractive and interesting. All of this created an alternative image of the USSR and the Soviet people, many of whom had become fully obedient to everything the government imposed on them and tried to avoid taking individual responsibility for anything.

In modern Russia, the term sovok is used to reflect the old-fashioned mentality of those who failed to adapt to the new capitalist society, thus hampering the country's economic and social transition from the Soviet regime. It most commonly refers to old-school bureaucrats. But it can also be applied to young people who think and act in ways common to late Soviet times, dividing things (from a book to a forest) among their own, needing care and protection, and to people of weak character who can be easily neglected or abused.