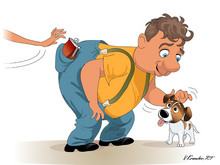 Don’t be such a Lokh!

There are several theories as to the origin of the word.  Some say that it is old government or prison slang, and the word itself is actually an acronym: “Litso Obmanutoye Khuliganami” (“An Individual Deceived by Hooligans” in English).  However, the word in fact has much older origins, according to Russian dictionaries.

The etymology of the word Lokh as a naïve or simple individual is a shortened version of the word Lopukh, which has a similar meaning in the ofenian trader language, a sub-culture of marketplace slang which dates as far back as 15th century Russia.

History tells us that in the 15th century, a large number of Greek traders and migrants immigrated to Russia.  Facing the language barrier between the two cultures, in an attempt to better explain to the Russians exactly who they were and where they were from instead of saying “Greece”, the various wandering Greek traders, musicians, and performers would simply say there were from Afini, the Russian word for Athens.  Eventually, due to the influence of the Russian accent, the spelling and pronunciation of the word changed from Afini to Ofini.

Over the course of the next one hundred years, the number of Greek wanderers and travelers living abroad in Russia became numerous enough to the point where they developed their own secretive culture and coded language understood only by them.  The ofenian language was born, and several words from the once secret language can still be found in contemporary Russian slang.

Among Ofenian traders, a Lokh was obviously a person (most likely a customer) that was able to be swindled or taken advantage of in a trade in order to secure a profit.  In contemporary Russian, this meaning still remains in a slang context.  It is perhaps with this origin in mind that the Russian slang (and rude!) phrase “Byez lokha, i zhizen plokha!” (In English “Without a Lokh, life is horrible!”) may take on a clearer meaning, as it would seem to imply that one cannot get ahead in life without taking advantage of the simple-minded.

If this is in fact the case, look out!  Don’t ever let anyone mistake you for a Lokh in Russia!