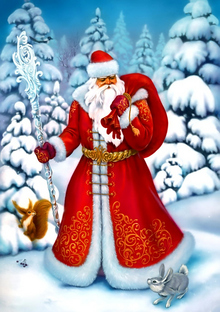 Ded Moroz or Father Frost, the Slavic version of Santa Claus, long ago became the symbol of Russian winter, New Year’s and presents. He is usually accompanied by his granddaughter Snegurochka riding with an evergreen tree in a traditional Russian troika, a sleigh drawn by three horses abreast.

Snegurochka is a unique attribute of the image of Ded Moroz – none of his foreign colleagues have such a cute companion.

The original Russian gift-giver was Saint Nicholas, the country's Patron Saint, whose Feast Day is celebrated on December 6th. The image of Saint Nicholas originates from the image of another hero – the ancient Morozko. In Russian folklore Morozko is a powerful hero and smith who chains water with his “iron” frosts. Morozko was not hostile to people - he helped them and presented them with awesome presents.

In fairy tales Morozko is at times kind and at times evil. To be precise, he is kind towards the hard working and the good-hearted, but extremely severe with the mean and the lazy. And it is not about justice only. It is rather about two personalities living in one magical person.

Ded Moroz and the Communists

In 1917, with the Bolshevik Revolution, Ded Moroz was banished into exile. He was considered a kind of a kids’ god, which was impermissible during Soviet times when Russian leaders were flatly against any manifestations of religiousness. But only 20 years later Ded Moroz returned to the country and New Year’s celebrations became public. Since then Ded Moroz and Snegurochka appear on New Year’s Eve, putting presents under the fir tree for the kids to find in the morning.

Visiting him at home

Those wishing to make acquaintance with Ded Moroz in his domestic surroundings can board trains and travel to the picturesque town of Veliky Ustyug in the Vologodsky Region of Northern Russia (approximately 500 miles northeast of Moscow) where, situated in the dense taiga forest at the confluence of three rivers, sits the log cabin of Ded Moroz.

There, in Veliky Ustyug, Ded Moroz waits through the summer reading letters that kids from all over the country have written to him regarding the presents they wish to find under the New Year’s Tree the next January 1st. 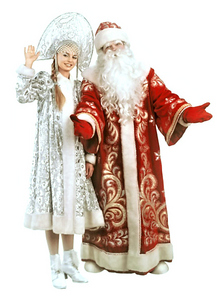 Ded Moroz has a number of distinguishing features that help tell him apart from his foreign colleagues: his shirt and trousers are made of flax and are usually decorated with white geometrical ornamental patterns. His fir coat is ankle long and is embroidered with silvery stars and crosses. His hat should be red and embroidered with pearls.

Ded Moroz wears mittens and a wide white belt. His footwear is luxurious – high boots with silver ornamentation, but on an exceptionally chilly day Ded Moroz can opt for valenki!

And finally he never appears without his pikestaff – made either of silver or crystal, it possesses a twisted gripe. It helps the not-so-young Ded Moroz make his way through the deep dark forest during long winter nights.

Despite the respectful age and the benevolent character children often tease Ded Moroz calling him “Ded Moroz the Red Nose.”

Ded Moroz it yourself!

Sometimes desperate parents of extra curious children eager to meet Ded Moroz in person disguise themselves as the gift-giver. In this case traditions are usually violated and the fake Fathers Frost may be noticed wearing slippers while their cotton-wool beards hang half glued to their chins.

Those who haven’t had the chance to meet the true Russian Ded Moroz and his cool granddaughter still have an opportunity to see their tiny replicas under the New Year’s Tree every December. Little statuettes, very accurately made, are often brought home by foreigners who long for genuine Russian winters, traditions and frost.