Home improvement, or How to beat your wife without knocking her teeth out

It still serves as a guide for male chauvinists all over Russia, though few have actually read it. Domostroy, which literally means “domestic order”, takes its name from a series of manuscripts dating back to the 16th century. They offer a set of rules supposed to help mediaeval Russians run a good household. And while much of the advice offered in Domostroy has become all but obsolete, the main take-home message – the wife must always consult her husband – is still popular with traditionalists.

You won’t get any Brownie points for guessing that the author of this manuscript was a man. With a few exceptions, women in mediaeval Russia were illiterate, and the narrative shows plenty of what feminists would call male biases.

Popular history has it that Domostroy was most probably authored by the clerk Silvestr, a priest in the Kremlin Cathedral of the Annunciation, though some researchers suggests it was compiled in Moscow from different writings, probably in the 1550s, a period when Russian society was undergoing reform and reestablishing its links to Europe.

There is also some disagreement over the work's target audience. Some historians believe that this almanac was written for the nobility. Others hold that rather than appealing to the highest echelon of society, Domostroy targeted the medieval upper-middle class, particularly rich merchants and government officials.

As Russia was undergoing rapid change, its social system was becoming more inclusive of people with different backgrounds. Whereas Boyars, the Russian nobility, learned social norms within the family circle, groups positioned lower in the social hierarchy required instruction to integrate into an environment that was new to them. 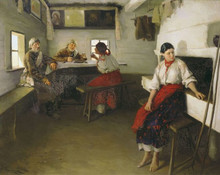 Domostroy covers the family's obligations from three angles: its duties toward God, relationships between family members, and the practical tasks involved in running a large household. The chapters detailing a household's responsibilities before God were mostly copied from earlier religious texts.

Men were to go to church several times each day, and make sure that other family members attended to their spiritual needs. Women and servants attended services "when they were able," but they too were to pray every day.

Domostroy is usually celebrated for its practical approach to issues big and small. For example, amid prescriptions of God-fearing, it also advises the faithful against shuffling their feet in church.

“If God sent children, sons or daughters, the father and mother must take care of these their children... The children must be brought up in the fear of God, and in good instruction and sensible teaching, in wisdom and politeness and work and handicraft... Such children and their parents are loved by God...”

In ancient Russia, the term "family" referred not only to a husband, a wife, and their children, but also to dependent relatives and servants, most of whom were serfs – similar to slaves. While Domostroy calls on masters to exercise wisdom and restraint, it also provides extensive instructions on the topic of corporal punishment for those who disobey.

“Enjoin your servants not to talk about other people. If they have been among strangers, and have noticed anything bad there, let them not repeat it at home; nor should they spread rumors about what is going on at home... Let a servant not put his finger in his nose, nor cough, nor clean his nose, nor clear his throat, nor spit. If he absolutely must do so, let him step aside...” 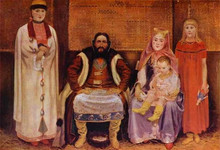 Even though written by a man and for a male audience, Domostroy talks extensively about women and their place in life. Keeping women in check was considered not only a man's virtue and duty, but also part of maintaining overall order in the country.

“In all affairs of everyday life, the wife is to take counsel with her husband, and to ask him, if she needs anything... Let her put on the best garment, if she receives a guest, or herself is invited somewhere to dinner...By all means let her abstain from drinking liquor, for a drunk man is bad enough, but a drunk woman has no place in the world...”

The position of women at home, as it is described in Domostroy, presented an interesting dichotomy. She was neither a complete slave, nor a complete master. She was considered a servant to her husband or father, yet a mistress to her servants.

Since at the time marriage was primarily a political and economic tool, with young women expected to follow blindly their parent's choice, Domostroy does not talk about any emotional ties between husband and wife. The two were expected to love God rather than each other.

A woman had to be chaste, pious and hard-working. Her biggest possible virtue was chastity and after that - being a good mother to her children and a wise wife to her man.

Yet, in case of any extramarital transgression on the woman's part, Domostroy provided its readers with a detailed action plan, though with some reservations.

"Husbands should not use wooden or iron rods on their wives, or beat them around the face, ears or abdomen, lest they cause blindness, deafness, paralysis, toothache, or miscarriage."

It goes without saying that wives had no right to punish their husbands for adultery. In fact, the church authorities would only grant a woman a divorce if her husband committed an act of treason against royalty, or if he tried to murder her. In the man's case, a wife's adultery was considered a sufficient reason for divorce, in addition to a list of others.