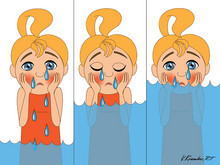 The term Samoyedstvo is Russian jargon for a state people fall into that includes extreme self-criticism, often paired with depression.  Arguments persist on whether or not samoyedstvo is a good or bad quality in a person; some say that the ability to be honest and critical with oneself is an admirable trait, while others counter by saying that such extreme self-criticism leads to a self-defeating downward spiral that is never healthy.  Whichever is accurate, however, samoyedstvo remains an important concept in the Russian mentality.

While the exact origin of the word is hard to pinpoint, the word can itself be broken down by syllables to better define its meaning.  The second syllable “Yedstvo” can be translated as “the act of consumption”, while placing “Samo” in the first syllable makes the following noun reflexive.  Therefore, the best direct translation into English is “The act of self-consumption”.  Some have tried to translate the word as “cannibalism” or “eat your heart out”, but neither of these is correct; cannibalism is the act of physically consuming another human, and “eat your heart out” is a phrase that is more sarcastic in its application, generally used as a command to tell others to “enjoy themselves as much as possible”.  Samoyedstvo, however, is more of a metaphor, describing the act of literally feasting on one’s own insufficiencies, mistakes, and weaknesses.

The causes for samoyedstvo can be different, but the end result is typically an endless and hyper-critical evaluation of one’s previous actions, focusing almost solely on the negative actions or mistakes made during the course of past events.  Furthermore, someone in a state of samoyedstvo will fixate on past mistakes, rather than learn from them and try to do better in the future.  If they linger in that state for a long time they can fall victim to a self-defeating cycle of inaction, convinced that they will be doomed to repeat the same mistakes over and over, believing that any future endeavors they undertake will be sure to end in failure.  In this state, potential forward steps or new ideas are not even attempted, as the person suffering from samoyedstvo has already sealed them to a disastrous fate in his mind.

Dealing with a person in a state of samoyedstvo can be equally frustrating, but one must remain optimistic and help the other person focus on the positive outcomes of their actions.  Some remedies include the philosophies “nothing is written in stone” and “you never know until you try” in order to try and provoke the individual to action and break the self-defeating cycle.  Anyone can fall into a state of devouring oneself, but the most important thing is to stop before there’s nothing left!