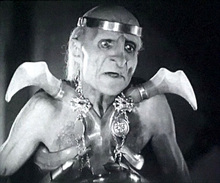 In Russian folklore Koshchey, also known as Koshchey Bessmertny or Koshchey the Deathless, or the Immortal, is an extremely negative character – an evil wizard or a demon who kidnaps young women and keeps his soul (or as he calls it, his death) unatached from his body in a remote hard-to-reach place.

No one can say for sure what Koshchey looks like as none of the fairytales give an exact description. Some sources say Koshchey’s name may come from the Russian word kost meaning bone thus suggesting a skeleton-like appearance.

He is very often thought to be an ugly, senile and infirm old man. But he’s also often shown astride his magic steed covering thousands of kilometers, which means he’s rather strong and somehow adroit.

Koshchey can fly and has power over the elements: dark clouds appear when he arrives on the scene. He easily changes his voice using it to terrify his opponents with blood-curdling cries or to charm and induce sleep when necessary.

He can also turn himself into a storm or a whirlwind. Koshchey is able to see with his eyes closed and has a good nose: it takes seconds for him to smell what he calls a “Russian spirit” – like a good character such as a young Russian man who has come to his castle to save the women kidnapped by Koshchey. 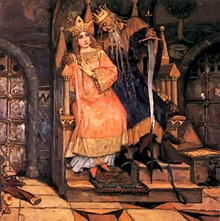 Every day, Koshchey Bessmertny goes to war, as if it were his job, and every day he steals a young lady, usually the bride of the main character or, on rare occasions, the his mother. Koshchey keeps his victims locked up in his castle. The hero of every tale sets out to find them: he wants to bring his beloved (or his mother) back home and kill Koshchey. And that is where he faces difficulties.

Death of the Deathless

Koshchey can only be killed by breaking the magic needle or, sometimes, by destroying the egg. (This is where Joan Rowling might have got the idea of Horcruxes for her “Harry Potter “books.) Animals, birds and also Baba Yaga always help the main character, Koshchey’s antagonist, find his way to the island, locate the tree, run down the hare, and catch the duck.

Eventually the main character succeeds in seizing the egg containing Koshchey’s force. He crushes it (or breaks the eye of the needle hidden inside) thus killing Koshchey. There is also an early variant of the fairytale where Koshchey dies in a much more boring way - his own magic horse kills him.

Buyan is a magical island in Russian folklore but it has several real prototypes. First, it was associated with islands in the Baltic Sea region: Rugen, Gothland, Bornholm and Skandzy. Then it was related to the island of Berezan’ in the Black Sea and then Khortitsa, on the Dniepr River.

Historical documents say there was indeed a big oak on this island, something the ancient people worshiped as a deity and sacrificed cocks to. A legend says there is a sacred stone there marking the center of the Universe. Those who succeed in finding it will always be happy.