Komsomol (All-Union Leninist Young Communist League, b.1918) was a youth organization controlled by the Communist Party of the Soviet Union.The name comes from the first syllables of three Russian words meaning Communist Union of Youth. In Russian - Kommunisticheskiy Soyuz Molodyozhi. This became a typical model for the formation of acronyms after the 1917 Revolution. It was used both for organizations and people. For example, many children were named Vladlen or Vladilen after the Revolution leader Vladimir Lenin.

Who were the members?

Basically, every teenager from the age of 14 in the USSR was a Komsomol member or komsomolets. It was the third stage in the hierarchy of youth organizations– the first two stages were Oktyabryonok (from October - the month in which the Bolshevik Revolution took place) and Pioner (pioneer). Only those who studied poorly or were sent to juvenile prisons did not receive this rank. Children of very religious parents were also excluded. Komsomol membership was valid up until the age of 28. But those who wanted to join the ranks of the Communist Party earlier could do so. 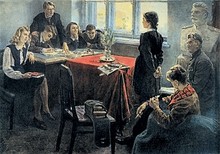 What did Komsomol organizations do? They encouraged good pupils and “spanked” the bad ones. They set up meetings to support the decisions of the Communist Party. In the fight against drinking in mid-1980s, for example, “alcohol-free” Komsomol weddings were heavily promoted. They also performed free labor and volunteer work – like helping poor or weak collective farmers with the autumn harvest. Surprisingly, such activities were fun for most of the young Komsomol members, as they didn’t have to go to school or university while performing these tasks.

Monthly Komsomol meetings were held in every class, in every school, in every institution.
For many teenagers, Komsomol membership was not interpreted as propaganda – it was simply a stage in their development and most still maintain fond memories today.

The Komsomol was set up on 29 October 1918 - one year after the Revolution - at the first Youth Congress under the patronage of the Bolshevik Party. The aim was to teach young people the values of Communism and prepare them for life under the rule of the Communist Party. This was crucial for the Soviet Republic during the Civil War (1918-1920), when young Komsomol members showed great bravery on the fronts. Immediately following the war young people were at the forefront of rebuilding the war-devastated country. 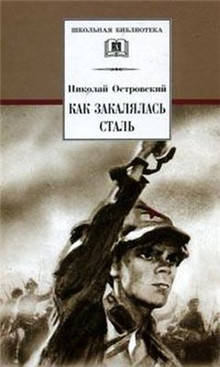 Nikolay Ostrovsky “How the Steel Was Tempered”

The events of the time are described in the novel “How the Steel Was Tempered” by Nikolay Ostrovsky. In this work of fiction the writer describes his own experience during the war – specifically his work in the railway workshops in Ukraine where he was a secretary of the local Komsomol organization. The book describes the heroic deeds of the young people who built one of the railroads in Ukraine, vital for the restoration of the country’s economy. At the end of the book the main character (and the writer himself) loses his eyesight. But he does not regret sacrificing his health for the good of the country. One of the key phrases of the book is: “Properly spent is the life that doesn't leave the man agonizing over all the years gone to waste.”

These words were often quoted in schools all over the U.S.S.R. The aim was to make young people think about how they could be useful to the Communist future and what they could do for the home country.

The following stories are examples of how Komsomol members showed bravery throughout Soviet history.

- during the Great Patriotic War in 1941-1945 many young people fought in the Soviet Army and in the underground resistance (two of the most popular examples are Aleksandr Matrosov, the young soldier who stopped the fire of the German machine gun with his chest, and Zoya Kosmodemyankaya, an 18-year-old partisan who was captured by the Germans while setting fire to houses in the occupied German Territory and was later executed by Germans);

– in the mid-1950s when the Soviet government decided to plough the virgin soil in Northern Kazakhstan for crop harvesting (known under the name of Tselina), Komsomol members flocked to the area and set up hundreds of collective farms, surviving in the harshest conditions, that even paid workers wouldn't have dared to live; 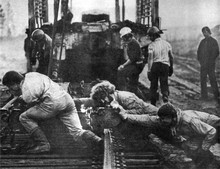 – in the 1970s and 1980s during the construction of BAM (the Baikal-Amur mainline), which became a huge Komsomol project, tens of thousands left their hometowns in Central Russia to endure the harsh winter and summer humidity.

Neither Tselina nor BAM produced any significant economic effects. But this was the manifestation of the slogan that reveals the relations between the Komsomol and the Communist Party: “When the Party says: ‘You must!’ The Komsomol replies: ‘Will do!’”

Climbing up the ladder

The Komsomol for some was a chance to show their dedication to their country. For others, this was an opportunity to make a career within the organization and advance to become a powerful member of the Communist Party. Sometimes the latter were not good students or workers – all they wanted was power.
At the end of the 1980s some Komsomol bosses were smart enough to grasp the opportunities of the free market.

They used all their Party connections to set up their businesses at low cost or even no cost at all. Among such “entrepreneurs” was Mikhail Khodorkovsky – once a very powerful man in Russia now jailed for tax evasion and embezzlement. It was the time of the so-called “Komsomol banyas” (“Komsomol bathhouses”) - young Russian nouveau riches celebrating their first business successes with alcohol and lots of women.

After the Collapse of the USSR

The Komsomol, as a compulsory all-Russia organization, ceased to exist after the collapse of the Soviet Union in 1991. But it is still alive as a youth wing of the now opposition Communist Party. Local organizations have become more marginal and more radical – they justify the activities of Joseph Stalin and support moderate nationalism but they are no longer numerous.

The newspaper of the Komsomol, the daily Komsomolskaya Pravda, outlived the organization. It is now one of best-selling tabloids in Russia.

Note: This entry was written by a former Komsomol Deputy Secretary of the Army Company who was stripped of his post for smoking “Marlboro” and being addicted to hard rock – things unimaginable for a good Komsomol member in 1980s.