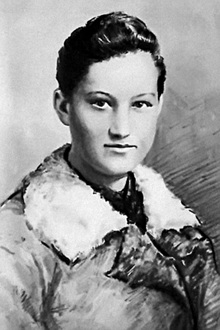 Zoya Anatolyevna Kosmodemyanskaya was a guerilla fighter and a member of a Red Army Western Front sabotage and reconnaissance force. She was the first woman awarded with the title of Hero of the Soviet Union during World War II. She became the symbol of the Soviet people’s heroism in protecting their motherland. Her image is depicted in fiction, essays, movies and art.

Zoya Kosmodemyanskaya was born in a village in the central Russian Tambov Region into a family of local priests. When she was six, her family found themselves in Siberia. Some research suggests they were expelled for Zoya’s father’s speech against collective farming, but in a report published in 1986, her mother stated that they had run to Siberia to escape an accusation. For a year, they lived on the Biryusa River in Southeastern Siberia, but later moved to Moscow. Zoya’s father died when Zoya was ten, after intestinal surgery, and the children, Zoya and her younger brother Aleksandr, remained under their mother’s care.

Zoya did well in school, was especially fond of history and literature and dreamed of entering Leningrad (now St. Petersburg) University. However, her relationships with her classmates did not develop well, and that, according to her mother, led to a “nerve illness.” Some witnesses suggested she had schizophrenia. In 1940 she was ill with acute meningitis, after which she underwent rehabilitation in Moscow’s Sokolniki clinic, where she befriended writer Arkady Gaydar, who was also there for treatment. Despite having missed many classes, she graduated from nine-grade secondary school later that same year.

On 31 October 1941, Zoya, together with 2,000 young communist volunteers entered a sabotage school, becoming a member of a sabotage and reconnaissance force officially named the “guerilla troop of the 9903rd staff of the Western Front.” After a short period of training, she was sent to the Volokolamsk District of the Moscow Region where she and her group succeeded in laying mines on a road. Later, Stalin issued an order to prevent the German army from stationing in towns and villages, and thus to burn and destroy all settlements in the German rear. To fulfill the order, sabotage group commanders were to burn ten settlements within a week, including the village of Petrishevo in the western Moscow Region. Two groups set out on the mission, but came under German fire and, after taking heavy casualties, scattered. Their remnants then rejoined under the command of Boris Kraynev.

On 27 November Kraynev, Vasily Klubkov and Zoya Kosmodemyanskaya set fire to three houses in Petrishchevo, where German soldiers and officers were stationed. Then, as they scattered to rendezvous at a prearranged meeting point, Kraynev left without waiting for his comrades. Klubkov was captured by the Nazis, and Zoya, left alone, decided to return to Petrishchevo and continue burning the village. However, both the Germans and the locals were already on alert, and the Germans had positioned several local men to guard the village against saboteurs. At nightfall the next day, Zoya was spotted by one of the guards as she tried to set fire to a barn. The guard called the Germans, who captured Zoya. The Nazis rewarded the local man with a bottle of vodka, and later, a Soviet court sentenced him to death. 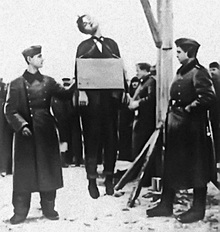 At the interrogation, Zoya said her name was Tanya and refused to say anything definite. The Germans stripped her naked and lashed her, then marched her outside in the freezing cold. Local women also tried to take part in the humiliation, by throwing a pot full of dishwater at her. Later, they too were sentenced to death. The next morning, Zoya was hanged with a tablet saying “arsonist” on her chest. Her body remained hung up for another month, and suffered numerous more humiliations from passing German soldiers. Then the Germans ordered the removal of the gallows, and Zoya’s body was buried outside the village, and later, reburied at the Novodevichye Cemetery in Moscow.

Zoya’s fate became widely known after the publicaton of Petr Lidov’s article “Tanya” in the Pravda newspaper in January 1942. The author learned of the Petrishchevo execution by chance, from a local elderly peasant who had witnessed it. In February the same year Zoya Kosmodemyanskaya was posthumously awarded the title of Hero of the Soviet Union.