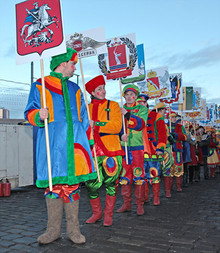 The “Skomorokhs” were ancient Russian strolling performers, who entertained people with songs, dances, comic plays and acrobatic tricks. They appeared in Russia in the 11th century, and were considered “devil servants” and outlawed by the church in 17th century.

Historians have not yet come to any conclusions about the origins of the word and the phenomena. Some say the first skomorokhs came to Russia from Europe, while others point out that the word “skomorokh” resembles the Byzantine word “skommarkh” – “master of laughter”, street comedian. Another version is that skomorokhs appeared in Russia without the help of neighboring countries and cultures, and their shows were the last remains of Russian pagan ceremonies, much like fairy-tales are the echoes of ancient myths.

Skomorokhs added a new genre to Russian folk art – drama, especially puppet comedy. They staged tales, made plays out of song lyrics or composed plays themselves. The character of their performances represented common social stereotypes, actors performed in masks, and this made skomorokh shows akin to Italian commedia dell arte. Comedies had simple plots and coarse humor, but their audience was unpretentious.

Skomorokhs contributed greatly to the development of Russian folk music. And literature researchers have found out that skomorokhs not only were mentioned in many folklore epic poems – bylinas, but participated in their composition and distribution. 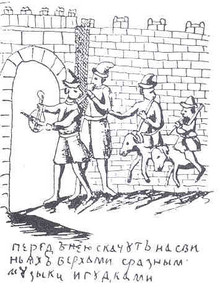 The majority of skomorokhs traveled from town to town, but some found rich noble patrons and settled in their households. Even the infamous Russian ruler Ivan the Terrible often invited skomorokhs to palace celebrations, and danced together with them in disguise.

One of the first representations of skomorokhs was found among the wall-paintings in the Sophia Cathedral in Kiev. It was painted in 1037, and depicts a dancing and singing skomorokh troupe. In spite of this, church authorities always criticized skomorokhs, accusing them of dealing with the devil and drawing people away from religion. Wearing masks, playing music and wide usage of swear words were considered to be signs of evil. Skomorokhs answered with laughter: a silly and greedy priest often appeared in their plays to be defeated by a smart and witty peasant.

In the middle of 17th century, the patriarch talked the Tsar into prohibiting skomorokhs all over the country. Moreover, all masks, masquerade costumes, and folk musical instruments were to be destroyed. Five full carts of gusli, most popular skomorokh musical instrument, were gathered and burned to ashes in Moscow after the Tsar signed the aforementioned prohibition.

After that, skomorokhs would appear sporadically here and there, but this tradition began to fade. Wandering skomorokhs left their “jobs”, and many of them mastered the new professions of robbers and thieves. Settled skomorokhs became professional musicians, dancers and actors.