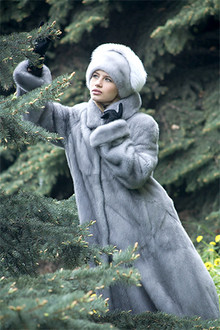 “People are more violently opposed to fur than leather because it's safer to harass rich women than motorcycle gangs.”

In Russia, criticism of fur can scarcely be heard amidst the rustling of magnificent coats. In Russia a fur coat is called a ‘shuba’. And magnificent they are indeed. They come from many animals including fox, rabbit, chinchilla (not native to Russia!), sheep, mink, beaver, stoat (ermine), otter and the prized but rare sable. The rarer the animal, the more its pelt is worth. A genuine sable shuba will set you back tens of thousands of dollars!

The fur from which coats are made comes in many grades and colors. Once the animal is skinned its pelt then goes through an extended chemical exposure of soaking and degreasing agents, enzymes, oils, greases, bleaches, dyes, reinforcing agents, toners, tanners and finishing chemicals. Many synthetic alternatives are made from oil and attempt to mimic the appearance and feel of the genuine article.

As any Russian woman showing off her shuba down the street will tell you, the fur coat serves a number of purposes. The first is fashion, Russians not being bothered about the anti-fur lobbies of their European and U.S. counterparts. The second is a statement of wealth. Wearing a fur coat can help open doors to higher social circles. The third is rather more practical and may explain why Russians don’t have the luxury of ‘rather going naked than wearing fur’. 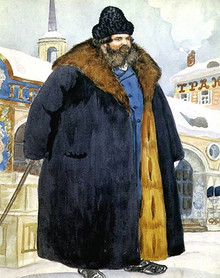 Peasant in a fur coat by Boris Kustodeyev

Russia gets very cold. In many regions sufficiently deep in the continental landmass or far north fur coats are still the best protection against the cold. In far flung Siberian regions reindeer coats and boots are worn and along with seal fur are known to be the warmest of garments. Synthetic alternatives or sports jackets come in a poor second.

The first written record of the word ‘shuba’ being used to describe a fur coat was in the town of Suzdal near Moscow in 1382. Before the mass production of cheaper alternatives, everyone had a fur coat. Peasants wore sheep or rabbit skin, higher social strata fur from various martens or polecats including the Sable. Sable fur sticks out as being associated with royalty and high office and as such is commonly regarded as the most valuable of such fur types. Old Russian furs were huge and thick and stretched all the way to the floor. Their modern counterparts are often a lot shorter, or are even just fur throws to be worn around the shoulders.

The shuba has become an icon of Russian female fashion and of Russia itself. It’s said, that when a Russian wife wants a one off test of whether her husband really loves her, she’ll ask for a shuba!