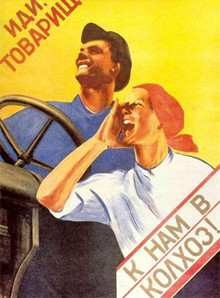 Comrade, come to our collective farm. Propoganda poster of 1930

Collectivization was a policy of forced consolidation of individual peasant households into collective farms called “kolkhozes” as carried out by the Soviet government in the late 1920’s - early 1930’s. By introducing this system, Stalin meant to overcome the food crisis holding the country and to increase peasant labor productivity.

In autumn of 1927, the government reduced bread purchase prices. The peasants, who were obligated to sell bread to the state, answered with “the bread strike”: they decided to wait until spring to sell their grain, because in spring the prices were to grow. This added to the problem of crop failure and caused supply troubles in many industrial centers.

To improve the situation, in some regions prodrazvyorstka was introduced: people were forced to surrender limited amounts of bread to the state. This policy had already been used once, several years before.  In 1928, crops failed again, and in spite of measures taken, famine returned to the country.

By 1927, there had been 14 thousand collective farms of different kinds in the USSR. The government saw them as more productive and easier to control, so it gave the collectives privileges: modern equipment and tax remissions. Facing the crisis, Stalin decided to consolidate all individual households into kolkhozes, by propaganda or by force. All lands, cattle and equipment were to become collective property.

The poor peasants were glad to hear this news, but the wealthy ones were not ready to give away everything they owned. In despair, people killed their own cattle and burned their own fields. Livestock population decreased to half its size. Riots started here and there, and after being suppressed they turned into acts of terror and sabotage.

The government answered with a wave of repression, known as “dekulakization”: rich peasants, called kulaks, who did not want to enter kolkhozes were considered public enemies and arrested, exiled, or executed. At the same time, if such a kulak changed his mind and tried to join a kolkhoz, it was prohibited to let him in.

Collective farmers are reading the Stalin's article "Dizzy with success", published in Pravde newspaper in March 2, 1930

In 1930, when 60% of peasants were in kolkhozes, Stalin suddenly addressed his citizens with an article, in which he criticized his own previous actions. According to this article, it was a mistake to drive people into kolkhozes by force, and so everyone had right to own a farm. 21% of the peasants left the kolkhozes immediately, but in half a year they had to return: the government introduced unbearably large taxes for individual households.

The USSR was a state with a planned economy. In 1932, the grain procurement plan appeared to be unrealistic: many regions were to surrender more bread than they had. The blame was shifted onto kulaks, who “want to choke the Soviet government by the bony hand of the famine”, as Pavel Postyahev, Secretary of the Central Party Committee, said. Stalin commanded that the plan be fulfilled at any cost, and famine did not take long to appear.

In Ukraine it was the most terrible. All the dogs and cats disappeared from village streets. Police reported acts of cannibalism and the lynching of cannibals. When peasants tried to run away to the cities, special forces stopped them.

To get at least a handful of grain, peasants sneaked into kolkhoz fields to cut spikes left after cropping or to pick up some seeds. It was extremely dangerous: people caught stealing kolkhoz property were arrested and executed or imprisoned for ten years. Yes, the aforementioned actions also counted as stealing. Peasants called this law “The Law of Three Spikes”, and 55,000 peasants fell victim to it.

7,000,000 died in 1931 – 1933, and the official newspapers remained silent about the famine. When foreigners visited USSR, they were met with feasts and smiles. They returned home assured that everything was all right in Soviet Union, and only Nazi propagandists might think or talk the another way.

In 1933, the reorganization of the administrative apparatus finally helped to stop the disaster and to secure a significantly large crop. In 1935, the ration system in the cities was abolished. However, forced collectivization nearly destroyed Soviet agriculture, and it took years to restore it.