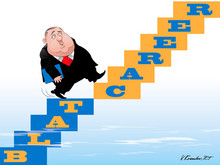 Blat is one of the pillars of the Russian way of life - much like heart-to-heart kitchen therapy sessions. It is akin to nepotism, only with blat, no blood ties are necessary for one party to bestow favors upon another.

Usually, it is implied that a favor is being granted in exchange for another favor – not necessarily immediately.

It’s all about who you know

The origins of the word take us back to the beginning of the XX century, to the Ukrainian city of Odessa, and its colorful underworld of Jewish gangs. “Blat” meant “initiated, privy to” in Yiddish jargon. Originally, the word was used to indicate one’s belonging to a criminal group – essentially, being part of an organized crime family, much like the Godfather films. With time, however, the word lost its criminal connotations.

In the Soviet Union, people rarely bought things – largely because demand far exceeded supply. That went not just for goods, but for services as well. Theater or opera tickets, furniture, raincoats, hotel rooms, vacation opportunities – all of it was nearly impossible to buy, unless you knew someone, who knew someone, who could get you the desired thing.

Frequently, the line of people involved in such “blat” operation made six degrees of separation look like child’s play.

Most importantly, blat could get you a job. And since major favors were usually done for someone considered important, getting a job “po blatu” meant that it was near darn impossible to get fired.

Some things stay the same

Times have changed, but blat has remained.

Though Russian consumers don’t have any problem with purchasing things, getting a good job may still require your lawyer uncle’s ex-wife to call her business-owner third cousin with a request to land you in a cozy position within the latter’s company. The notion of choosing workers according to their skill and not on the basis of their possible usefulness still seems alien to many Russians.

And sometimes, it just seems easier to make a phone call (which may or may not be the first in a string of a dozen) than to pump out a good resume or spend months trying to get that coveted ticket to the Bolshoi’s grand re-opening.