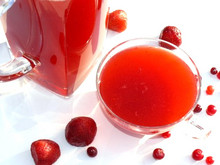 Desserts can be a sweet way to end a good meal. But while many desserts can be described as satisfying, decadent or delicious, few can boast the added distinction of being legendary. One that can is the Russian dish known as kissel (also spelled kisel). It’s a soft, fruit-based dessert, generally made from berries, sugar and either cornstarch or potato starch. Its name comes from the ancient Slavic word meaning ‘sour,’ because sour fruits are traditionally favored.

Kissel’s mythical properties stem from a tale in the Primary Chronicle, an ancient Russian text compiled in the Twelfth Century. It tells the legend of how the residents in the Russian city of Belgorod were besieged in the Tenth Century. On the verge of starvation and surrender, a city elder gathered all the remaining wheat and honey and cooked kissel in a pot he’d buried in the ground. The legend says the elder invited the enemies into the city to eat kissel with them, and when they saw what appeared to be the tasty food coming straight from the ground itself, they abandoned their siege as hopeless, and the city was saved.

Kissel also has a small role in Russian Orthodox mourning rites. After a funeral, the family and friends of the departed meet at a relative’s home for a meal; Kissel is traditionally among the first refreshments served.

The food also plays a role in Russian proverbs. The phrase, “the seventh water on kissel” is used to describe someone who’s a distant relative. Russians also refer to heaven or paradise as a place having, “milky rivers flowing past kissel banks.”

Kissel continues to be enjoyed today in many forms and varieties. It can be hot or cold, firm or liquid, and made using many kinds of fruits. The most popular in Russia are cranberries, cherries and red currants. Other parts of Eastern Europe also use strawberries, blueberries, raspberries, gooseberries or rhubarb. Kissel can be served in a cup for drinking or in a bowl to be eaten with a spoon, and usually topped with sweet cream. Kissel can also be used as a topping for waffles or pancakes.

Instant kissel mix is available today in many supermarkets and grocery stores, but many argue that traditional methods taste best. The primary way to make kissel is to combine the preferred starch or flour with water, add the mashed fruit of choice, and then boil the mixture. There are many different recipes available for making kissel at home – some very simple, others more complex. Here’s one to try: