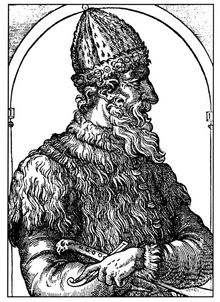 Ivan III was born in Moscow in 1440. He came from a generation of Moscow's grand dukes. His father was Vasily II the Dark, a name he was given during the civil war when he was blinded by his cousin Dmitry Shemyaka in his attempt to acquire power. In order to secure his son's succession Vasily declared Ivan co-ruler at only six years of age. At twelve Ivan was married to Maria, princess of the principality of Tver. Their marriage facilitated the annexation of Tver, which had been Moscow's major rival since 1300. During the ten years before his father's death, Ivan stayed by his side, participating in all his dealings and crusades. He was already an experienced prince, with strong character and the capacity to deal with complex governmental questions when he took the throne at the age of 22. However, the first five years of his reign were uneventful.

In 1470 Ivan launched a war against the Novgorod princedom, which he conquered and annexed in 1478, thereby acquiring all of northern Russia from Lapland (now Finland) to the Ural Mountains. He further increased his domain either by conquest, purchases of surrounding sovereign territories or by using his diplomatic talent in exacting allegiance from weaker princes. As a result of two wars with Lithuania (1492 and 1500), he forced Alexander I, the ruler of that country and king of Poland, to give up a score of towns. Ivan III became the 'gatherer' of Russian land and tripled the territory of his state. 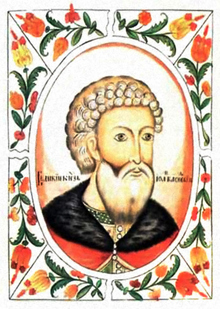 During that time Moscow was still a part of the Mongol Tatar Empire of the Golden Horde and for over two centuries was nominally expected to pay tribute to the Tatar rulers. Though the Mongol Horde was already weakened by this time, it was Ivan who formally refused in 1480 to pay further tribute. The Mongols did not have the strength or even the will to respond. The Horde's last khan, Amed, made a token attempt to make Ivan comply, but the two armies just stood opposite each other on the Ugra River and no battle was ever fought. Instead both sides retreated and the tribute was never again demanded.

Ivan' first wife Maria of Tver died in 1467. He later married the Byzantine princess Zoe Palaeologa, who took the Orthodox name of Sofia. She brought with her customs of the Byzantine court and more openness to European culture. The new political position of Moscow gave rise to the idea of Moscow as the Third Rome (Rome and Constantinople being first and second). Sofia had an enormous influence on Ivan. In 1497 he took as Russia's emblem the double-headed eagle, a Byzantine symbol, and granted Sofia's request that Italian architects rebuild Moscow. Under Ivan III, a code of law known as Sudebnik was compiled in 1497. It was the first time that the laws of Moscow were written down in one place.

Ivan III's success in making Moscow the centre of Russian power earned him the title "the Great." He was the first ruler to use the titles of Tsar and ‘Ruler of all Russia.’ Ivan III died on 27 October 1505 and was succeeded by his son Vasiliy III.