Russian Emperor Peter III ruled for only six months: From December 25, 1761, to June 28, 1762. He was groomed for the throne of Sweden, but was destined to become the Russian Emperor. Peter often told his contemporaries that he didn’t feel he was Russian. He realized that the Russian people would never understand and accept him, and he was sure that he would die in Russia. His grim premonition came true.

Peter III was born in the city of Kiel, Germany, on February 21, 1728. He was the only son of Charles Frederick, Duke of Holstein-Gottorp and Anna, daughter of Peter the Great. The boy’s father, Charles Frederick, was the nephew of Charles XII. Thus, the boy born Charles Peter Ulrich was the grandson of two Emperors – Peter the Great of Russia and Charles XII of Sweden. His mother Anna died soon after his birth.

When Peter was 11, his father also passed away, and the boy became an orphan. He spent his childhood at the court of Holstein, which was formerly controlled by Prussia. Physically and mentally weak, Peter was educated by marshals who were good warriors, but helpless teachers. Raised cruelly by his mentors, young Peter was poorly educated, and often punished. By the age of 13, the future emperor knew little French. 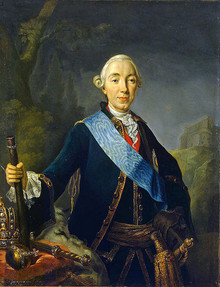 Throughout his life, he showed no interest in science: He hated Latin, and after becoming emperor he banned Latin books from his library. Still, he was fond of the arts – an impressionable and nervous boy, he enjoyed music and painting. Peter’s true passion was for military parades and uniforms, and he dreamt of being a world-famous military commander.

It was believed that Peter would inherit the Swedish throne, so his tutors cultivated his Lutheranism and Swedish patriotism. But in 1742, the 14-year-old boy was taken to Russia by his aunt, Russian Empress Elizaveta, and he was proclaimed the official heir to the Russian throne on November 7, 1742. Ten days after he was baptized in the Russian Orthodox Church, his name was changed to the more Russian-sounding Pyotr Fyodorovich. His new educator was academic Yakob Shtelin, who frequently expressed anxiety about the boy’s laziness, boasting and cruelty towards animals.

On August 21, 1745, Peter married Princess Sophia Augusta Frederica of Anhalt-Zerbst, who changed her name to Ekaterina Alekseevna – the future Empress Catherine the Great. The marriage was a political one, and was organized by Empress Elizaveta. The union was a disaster: Peter and Catherine were completely different, and had nothing in common. Ekaterina was a young woman of prodigious intellect, while Peter was a child interested only in military games. He has no interest in women or love. 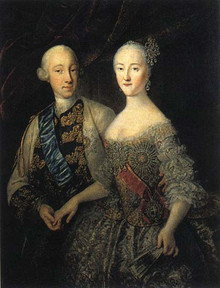 Some researchers claim that the couple did not have sexual relations until the 1750s, when Peter underwent a special medical operation. However, there is no evidence that this operation took place. Eight years after the wedding, Ekaterina became pregnant. In 1754, she gave birth to a boy: the future Emperor Paul I.

The son did not unite Catherine and Peter, and their marriage was contentious. Both had other lovers and favorites. Moreover, Peter invited a Holstein regiment to Russia, and spent all his time in military maneuvers. Playing violin was another one of Peter’s hobbies. He attempted to learn Russian: according to his contemporaries’ memoirs, Peter did not love the country, did not care about its history and people, and despised Orthodox traditions.

Empress Elizabeth did not allow him to participate in the politics of the country, and Peter had no opportunities to show his worth as a leader. This angered him, and he privately criticized the Russian government and the Empress. During the Seven Years’ War (1756-1763) between the major European powers, Peter publicly expressed sympathy for Frederick the Great of Prussia, who was fighting against Russian troops. Peter III subsequently became even less popular among Russians.

Peter ascended to the Russian throne on December 25, 1761, the day Empress Elizabeth died. He became Peter III. The new Emperor became obsessed with the idea of proving his worth, though he had no workable plans to develop the country. During the first days of his reign, Peter lifted the exile of several state figures deported by Elizabeth. He also introduced a number of domestic reforms.

Peter III released the gentry from compulsory state service, and issued an edict that the new owner of monastery lands was the state, not the church. The move replenished the treasury, and unchained the state from the power of the church. He also made plans to reform the Russian Orthodox Church, which he was never able to enact. In the army, he started to propagate Prussian traditions, much to the anger of Russian soldiers and officers. 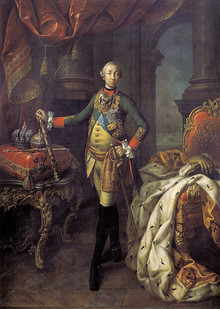 Peter’s foreign policy was a reversal of his predecessor’s. He admired Frederick the Great, the King of Prussia, and did everything he could to win Frederick’s approval. As a result, the two countries signed a peace treaty, and Peter III returned to Prussia the lands conquered by Russia during the last five years of the war Seven Years’ War. Later, a military alliance between Russia and Prussia was organized, with the aim of going to war with Denmark. Peter hoped to win back the lands that formerly belonged to his father. Peter asked for Frederick’s help, and wanted to declare war in August, 1762.

Historians mark Peter III’s actions as disordered and unreasonable, and had no support in wider Russian society. The Orthodox Church, the army and state officials barely tolerated the emperor. After the peace treaty was signed with Prussia, Russians dubbed Peter III ‘the betrayer.’ His personality and policies were so bizarre that no one could guess what his next move would be. State officials, tiring of this danger, plotted to dethrone their emperor.

Peter’s wife Catherine was the mastermind of the conspiracy, which was supported by the nobility and the army. On June 28, 1762, the army swore allegiance to Catherine, and she was pronounced the new Empress of Russia. The Senate and the Synod also pledged fealty to her. Peter III was forced to step down, and was sent to Ropsha, a village not far from St. Petersburg. Peter died on July 17, 1762. His death was officially deemed an accident, but it later became clear that he was assassinated. Peter’s death was described in the letter that Count Aleksey Orlov sent to Empress Catherine.

Peter III was buried in the church of Aleksandr Nevsky Monastery in Saint Petersburg, but in 1796 his remains were re-interred in Petropavlovsky Cathedral, next to remains of his wife.

There were many legends about the life and death of Peter III. Some people believed he had survived and escaped. Many impostors claimed to be a miraculously saved Peter III, the most well-known of which was Emelyan Pugachev.

Written by Alyona Kipreeva, for RT