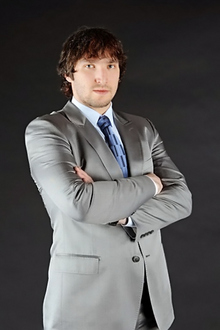 He’s not yet thirty but he’s already a legend and many predict he will make a revolution in ice hockey. Ovi, “Alexander the G8” or simply Alex, is a Russian NHL star and an integral part of the Washington Capitals’ success. Sports analysts note his amazing shot and his readiness to lose a tooth for the team.

Alexander Ovechkin was born in Moscow into a family of athletes. His mother, Tatiana Ovechkina, is a legend of Soviet basketball; his father, Mikhail Ovechkin, is a professional football player. Unsurprisingly Alex inherited the same passion for sports but chose his own path with ice hockey.

It was his older brother Sergey who introduced him to the sport. His parents say when Alex picked up a stick for the first time, he wouldn’t let go.

Ovechkin started training at the age of seven and it very quickly became obvious the boy had a gift for the game. He made his professional debut at 16 years old for Russia’s “Dinamo” team.

In 2004 Ovechkin was picked by the Washington Capitals in the NHL entry draft. But as the lockout hit he had to wait for another year. He made a startling debut with the Caps scoring double in his first ever NHL game against the Columbus Blue Jackets. He finished third overall in the NHL in scoring and tied for third in goals at the end of the season. He was listed in the NHL First All-Star Team and was awarded the Calder Memorial Trophy - Rookie of the Year.

That same season he made history with his 32nd “impossible” goal (the Caps vs. the Phoenix Coyotes). As Ovechkin gathered the puck and dashed to the net, he stumbled and fell on his stomach, rolled over sliding on his back, with only his right hand holding the stick he reached over his shoulder and shoved the puck into the net past the stunned goaltender. It took him six seconds and even Ovechkin had to check the video board to make sure he had actually done it. That goal was named one of the best in ice hockey history by many of his fellow players and sports analysts.

In 2006 he was part of the Russian ice hockey team at the Winter Olympics in Turin, Italy. Russia came away with no medals. And in 2007 he joined the Russian team to win bronze in the World Championships held in Russia. The 2006-2007 season was not his best but things got better for him the following year. 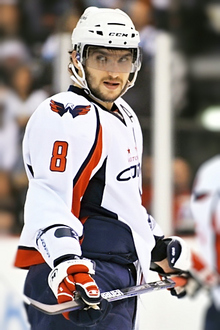 In 2008 Ovechkin topped the league with 112 points including 65 goals and became the first player in NHL history to get four major awards in one season - the Hart Memorial Trophy (MVP), the Lester B. Pearson Award (MVP as voted by players), the Maurice Richard Trophy (most goals) and the Art Ross Trophy (most points).

The same year Ovechkin signed a 13-year extension contract with the Caps worth US $124 million. It became the first contract in NHL history to break the US $100 million mark.

But the grand finale of the 2008 hockey season was yet to come. Ovechkin joined the Russian team at the IIHF World Ice Hockey Championships held in Canada. Russia made it to the finals along with the hosts and long-time rivals, the Canadian team. To warm things up the game was taking place at the very birthplace of the ice hockey in Quebec and on the 100th anniversary of the IIHF (International Ice Hockey Federation). After two periods Canada had a two-goal lead but missed two pucks in the third. The Russians didn’t miss their chance in overtime and the gold was won. Russia became World Champion for the first time in fifteen years. Moscow nearly exploded with celebrations and Alexander Ovechkin was among the tournament’s heroes. He finished the Championship with 12 points (6 goals, 6 assists) in 9 games and was also picked for the Championship All-Star Team.

On February 5, 2009, Ovechkin scored his 200th goal. He became the fourth player in the league’s history to reach that mark in four seasons, along with Mike Bossy, Wayne Gretzky and Mario Lemieux.
Ovechkin is at times a target for criticism for his after-goal performances. On 19 March 2009, he scored his 50th goal of the season, thus becoming the first Washington Capitals player to reach the 50-goal mark three times. Ovechkin celebrated the goal by pretending to warm his hands over the “hot” stick. The show-off caused some harsh comments from sports analysts and even his team-coach.

In January 2010, Ovechkin was chosen to be the Washington Capitals captain, thus becoming the first ever European and second youngest captain in the team’s history.

A month later, Alex the Gr8 has collected his 500th point in his NHL career, scoring a double against the New York Rangers. He is the fifth player to achieve such a milestone in only five seasons.

Despite some impressive stats in the NHL, Ovechkin has failed to win anything with the Russian national team in 2010.

He and his partners were thrashed by archrivals Canada 7-3 in the quarterfinals of the hockey tournament at the Vancouver Olympics.

The star forward expressed his regret with the poor display by pushing a female fan and breaking a camera belonging to a journalist who wanted to interview him. He later apologized.

Ovechkin scored a goal in five games in a row for his country at the 2010 IIHF World Championships in Germany, only to see Russia go down to underdogs Czech Republic in the finals.

This biography can only give a dry account of his life and cannot describe the delight that he is to watch! So if you’ve never seen Ovi, “Alexander the G8” or just Alex Ovechkin play - you have to!