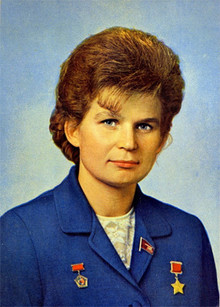 Valentina Tereshkova was the first woman in space. In 1963, she spent three days in orbit as the pilot of the Vostok 6.

Tereshkova was born in a village named Bolshoe Maslennikovo, Yaroslavl region, in Central Russia. Her childhood was affected by two wars in a row. In 1939, her father was killed in action during the Russian-Finnish war, a one-year-long armed conflict in the northwest of the country. Two years later, World War II came to the USSR, and the Nazi forces were stopped only 50 kilometers away from the Yaroslavl region.

After the war, in 1945, the family moved to Yaroslavl and Tereshkova went to school. As many other children those days, she finished the seventh grade, and then switched to evening school so she could work in the daytime. First she became a worker at a tire plant, and then got a job at a weaving factory, planning on becoming a weaver like her mother, not a cosmonaut.

In 1959, Tereshkova unknowingly made a decision that completely changed her life: her friend talked her into joining the local skydiving club. Since that moment, Tereshkova spent every free minute there and soon became a regional champion in skydiving.

Her mother did not approve of the hobby, saying it seemed too boyish. Sometimes, she even locked the future cosmonaut at home to stop her from going to the airfield.

On April 12, 1961, humankind made its first step into space: Yury Gagarin flew around the Earth on the Vostok-1 spacecraft. The same year, German Titov spent more than 24 hours in orbit, and in 1962 the Soviet leader Nikita Khrushchev decided it was time to give way to women. The authorities wanted to overtake the USA in the space race, and scientists were eager to learn how a spaceflight would affect a woman’s system: they looked forward to long-term outer space expeditions and mixed-crew spacecrafts.

After Gagarin's flight, thousands of letters arrived in the Kremlin: people from all over the country were willing to volunteer to follow in Gagarin's footsteps. To find the first female cosmonaut, a special commission headed by Gagarin himself went through these letters. They picked messages written by female skydivers under 30, preferably workers without a high education. Khrushchev wanted to show the world, that in the USSR anyone could pilot a spacecraft. The correspondents who matched this description were interviewed in person.

In March, 1962, five candidates were chosen, and arrived in Moscow. A group was formed, and a year-long training process started. The project was classified, so Tereshkova told her mother she was preparing for an all-USSR skydiving championship. She did not mention either the days spent in the complete silence of a soundproof chamber, nor the zero-gravity tests. Skydiving was a part of the training too, as the cosmonaut was to catapult herself from the landing section of the spacecraft seconds before it hit the ground and land on her own. 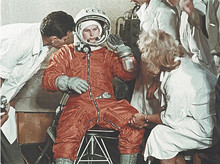 The women were trained just like the men were, but there was one difference. Each of the male cosmonauts was sure that one day, if his health did not betray him, he would see the Earth from orbit. There was always certainly a next flight for them. Tereshkova's group was an experiment. Only one of the five had a certain opportunity to go into space. In spite of this, the girls became close friends, and their friendship is still unbroken.

In March 1963, Valentina Tereshkova was selected to pilot Vostok-6.

On June 16, 1963, Tereshkova arrived at the launch site. Her code name was Seagull, and there was a picture of one she embroidered on her space suite. Approaching the rocket, she said, “Hey, sky! Take off your hat, I'm coming!”.

The flight almost turned into a tragedy because of a mistake in the automatic navigation software. Tereshkova’s spacecraft was moving further and further from the planet, instead of slowly going down towards it. Tereshkova noticed this early enough to save herself from a tragic death, as well as the staff of the construction bureau, which had designed Vostok-6, from Siberian labor camps and executions. In a feverish haste, Sergey Korolyov, the head of the Soviet space program, together with Yury Gagarin developed a new landing algorithm.

The information about the mistake was classified. Only forty years later did Tereshkova tell this story to the newspapers.

Tereshkova orbited the Earth 48 times. The landing was successful, though Valentina received a bruise on her face. The landing section fell in the Altay Region and was found by the locals. One of them, a senior woman who helped Tereshkova out of her space suite, asked Tereshkova if she had seen God out there. Tereshkova, who had not eaten anything during the three days of her journey, gave them all her remaining space food as souvenirs and gratefully accepted their invitation to dinner without going through any medical procedures first. This was a violation of the rules, and the commandant gave her a reprimand.

Tereshkova’s mother learned about the daughter's flight from the TV, while reading her letter from Moscow. The letter was about the hardships of the skydiving contest.

The flight was followed by a numerous rumors, most of them mentioning Tereshkova’s health. They claimed she had suffered food poisoning while in orbit, and that being unable to take off the space suite, she had been suffering from incredibly strong skin irritation. The most sinister rumor was that after the landing Tereshkova spent a month in intensive care.

It was her first and only flight. Korolyov had plans for her and for her teammates, but in 1966 he died of cancer. The following experimental launches of a new type spacecraft ended tragically, and women were banned from practical astronautics again. The next woman to travel to space, Svetlana Savitskaya, also a Soviet citizen, made her trip only in 1982. 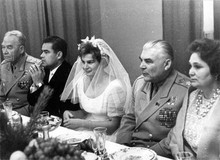 Tereshkova continued her career as an instructor and a test pilot. She received a high education and a doctorate degree in technical sciences. In 1963, she married her fellow cosmonaut Andriyan Nikolayev, who had also been to space, and a year later gave birth to their daughter, the world’s first child of two cosmonauts. The marriage was unexpected for the general public, and so a new rumor was spread: Khrushchev made the astronauts marry so the scientists could study the children. According to another rumor, Tereshkova’s daughter was born deaf and extremely week. Neither of the rumors are true.

In 1968, Tereshkova headed the Soviet Women’s Committee. She never called herself a feminist, but she made great contributions to the fight for women’s rights. Tereshkova held this position for 19 years.

In 1982, Tereshkova divorced and got married again. Her second husband, Yuliy Shaposhnikov, was a surgeon. Afterwards, Valentina barely spoke to the press, did not give any interviews and it seemed did everything to remove herself from the limelight.

In 1997, Tereshkova left her job of being an instructor, and became a research scientist at the same training center.

Nowadays, Valentina Tereshkova is a member of the State Duma and a loving grandmother. Her youngest grandson Andrey wants to be a pilot. The roof of her house is decorated with a seagull-shaped weathercock, in memory of her space codename.