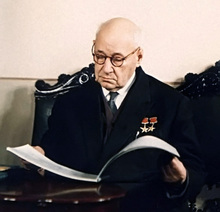 The Russian aeronautical engineer and army officer Andrey Tupolev was the leading designer of large and heavy aircraft in the USSR.

Andrey Tupolev was born into a large family on 10 November 1888 in the village of Pustomazovo near the city of Kimry in Russia’s Tver Region. His father Nikolay Ivanovich Tupolev was a notary at the Tver Region District Court. His mother Anna Vasil’evna Lisicyna was a housewife. She spoke fluently French and German.

After graduating from the Tver gymnasium Tupolev was admitted in 1908 to two Moscow universities at the same time. One was the Institute of Connecting Lines (engineering). But he preferred to study at the leading technical university of the Russian Empire at that time – the Imperial Moscow Technical School that is now known as the Bauman Moscow State Technical University (BMSTU). 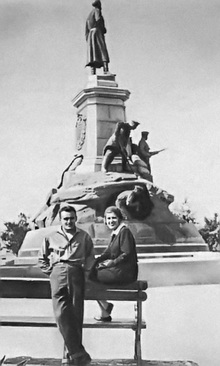 Young Andrey Tupolev showed a great interest in aviation from an early age. While performing his studies at the university in 1909 he started attending an aeronautics group under the command of Nikolay Zhukovsky, a famous Russian scientist and founding father of modern aero and hydrodynamics. Young engineer Tupolev constructed his first sailplane and performed in it his first time flight in 1910.

In 1911 his successful scientific studies were interrupted. He participated actively in antigovernment riots and handed out illegal brochures. Tupolev was expelled from the university. He left Moscow to return to his native village in the Tver Region and stayed there under police supervision. Shortly before WWI broke out he was admitted back to the university and continued his studies.

During 1916-1918 Andrey Tupolev, in cooperation with Nikolay Zhukovsky, worked on the development of aerodynamic tunnels. Graduating with honors from the university in 1918 young Tupolev with professor Zhukovsky founded TsAGI (the Central Aero Hydrodynamic Institute). Tupolev was the head of the aviation department. One of the major innovations brought by Tupolev to the Soviet aircraft manufacturing industry was replacing wooden parts of the planes with duralumin. This upset the wood producing industries. But Tupolev overcame the wood lobby and insisted on using duralumin in aircraft construction.

The results of the work were the ANT-5 (1927) and the ANT-4 (1925) also known as the TB-1 heavy bomber. By building these aircraft and by consistently using duralumin 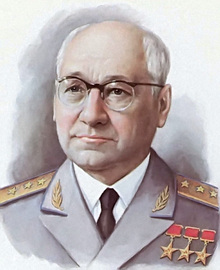 Tupolev determined the future development of the aircraft manufacturing industry. Tupolev's design approach defined for many years the trends of civil and military heavy aircraft development. Aircraft designed at TsAGI at that time had outstanding flying performance and range. With these aircraft it was possible to fly from the USSR to the USA via the North Pole. One of the symbols of that time was the Tupolev ANT-20, also known as Maxim Gorky - an 8-engine aircraft, the largest in the 1930s. It could cover outstanding distances.

On 22 October 1922 the famous OKB Tupolev (Tupolev design bureau) was founded. It was also known as OKB-156, with the design office prefix Tu. It was home to more than 300 different projects. More than 100 of them were built. About 70 were in serial production. Among these were world known civil and military aircrafts such as Tu–95, Tu-160, Tu-154 and Tu-144. More than 78 world records were set with these planes.

Andrey Tupolev’s scientific interests were not limited to aircraft design. He took much interest in related scientific spheres. He could always foresee the future development of aviation and always implemented the most cutting-edge innovations in aircraft design. His many-sided approach to the challenges that faced his OKB was noticed and highly appreciated by the Commissar of Soviet Heavy Industry. Andrey Tupolev was appointed as head engineer of the Soviet aircraft building industry. He started numerous projects in experimental spheres of aviation. Tupolev also tried to modernize building factories, using the most innovative western technologies. These actions gave an unprecedented impulse to Soviet aviation underlined by the slogan “catch up and surpass the western aviation industry.”

But Andrey Tupolev did not work for long as the lead engineer of the Soviet aircraft building industry. During the Great Purge in 1937 Tupolev was groundlessly accused of espionage and sent to jail. Almost all TsAGI aircraft designers were jailed with him. Andrey Tupolev stayed in prison for one and a half years and was later transferred to KB-29, which was fully under NKVD command (the People’s Commissariat for Internal Affairs). 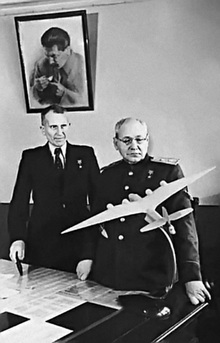 This plant was also known as Sharashka (an informal name for secret research and development laboratories in the Soviet Gulag labor camps system). Tupolev worked together with other ex-TSAGI employees. The Sharashka then moved to Moscow and was dubbed “Tupolevka” after its most famous prisoner.

In 1939 Tupolev received the challenging task of building a new dive-bomber with tactical capabilities that would exceed all other dive-bombers. In 1941 Tupolev and his crew came up with the Tu-2 (NATO reporting name “Bat”).

It was a twin-engine high-speed daylight bomber. Designed to challenge the Ju-88 Junkers, the Tu-2 proved comparable, and was produced in interceptor, torpedo and reconnaissance versions. For developing this plane Tupolev was awarded with a state prize.

He was released from prison on 27 June 1941, five days after the start of the Great Patriotic War. Stalin couldn’t but understand the vital importance of Tupolev’s experience in aircraft designing. At that time the air fleet of the USSR needed new airplanes to meet the challenges of the time. Andrey Tupolev perfectly coped with the problem providing the Soviet army with new innovative fighters and bombers.

After the end of WWII Tupolev remained one of the leading Soviet aircraft designers. He was the founder of Soviet reactive engine powered civil aviation, coming up with the idea of Tu-104 in the 1950s. 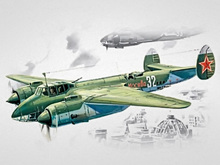 A natural leader and head of one of the most cutting-edge innovative research centers (TsAGI), Andrey Tupolev was able to attract young talented engineers to work with him. Pavel Sukhoi, a founder of OKB Sukhoi and the developer of Su fighter Jets was among them. Tupolev could make people enthusiastic about solving technical challenges. Though he was a leading constructor he never made significant decisions without debating them first with his colleagues. “An airplane is a collective product of different people,” he used to say. He was highly praised by his colleagues and followers.

Working at TsAGI and OKB Tupolev, Andrey Nikolaevich was able to raise a new generation of aircraft designers. One of them was his son – Aleksey Tupolev, who took over from his father as the head of OKB Tupolev.

Andrey Tupolev died on 23 December 1972, leaving a rich legacy behind him. This was the man who changed aviation and influenced it like no other.

The most well known aircrafts by Tupolev 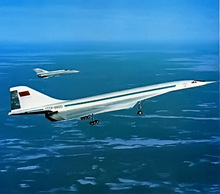 Aleksey Tupolev successfully continued his father’s projects. Some of the best-known projects of OKB Tupolev were Tu-95, Tu-160, Tu-154 and Tu-144.

The Tupolev Tu-95 is a large, four-engine turboprop powered strategic bomber and missile platform that has the NATO reporting name “Bear.” Built to defeat any targets via cruise missiles in the enemy’s rear area at any time and in any weather conditions, it became one of the symbols of the cold war. It remains the fastest mass-produced propeller-driven aircraft and the only turboprop-powered strategic bomber to go into operational use.

The Tupolev Tu-160 is a supersonic variable geometry heavy bomber that has the NATO reporting name “Blackjack.” Russian air force pilots named it the “White Swan.” Despite carrying deadly weapons and being outstandingly 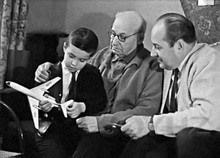 powerful, the plane is unbelievably elegant in the air. It is similar in configuration to the American B-1 Lancer but is significantly larger and faster than the B-1B with a greater combat range and payload capacity. It is both the largest variable-wing and largest combat aircraft ever built. It is part of a nuclear triad of the Russian Federation.

The Tupolev Tu-154 with the NATO reporting name “Careless” is a medium range trijet civil airliner. It became one of the notable civilian aircraft of its era and was often referred to as a Soviet “workhorse.” It serviced well for several decades for Aeroflot (the main Soviet airline) and its subsidiaries. It was exported to more than 17 countries.

The Tupolev Tu-144 with the NATO reporting name “Charger” was the world’s first supersonic transport aircraft, a competitor of the Aerospatiale-BAC Concorde. It had a number of innovative solutions for a civil aircraft of that time. The Tu-144 first broke the speed of sound on 5 June 1969 and on 15 July 1969 it became the first commercial transporter to exceed Mach two. It remains the fastest airliner.

But the development of the program of Tu-144 suffered dramatically after an airplane crashed at the Paris Air Show on 3 June 1973, killing six people on board and eight on the ground. The plane undertook a violent maneuver. Pulling out of the subsequent dive, the Tu-144 broke up and crashed.

The cause of this accident remains controversial. But the main reason is believed to be a French chase plane “Mirage” that apparently was on an espionage mission trying to get pictures of the landing airplane. The tragedy was the result of an attempt to avoid a collision.

Artyom Mikoyan Artyom Mikoyan was the distinguished aeronautical constructor, to whom we owe a great deal of the country’s image as a military power.