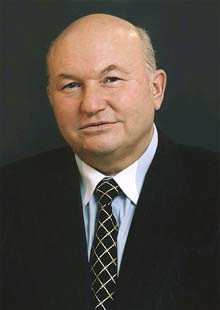 Born on September 21, 1936 Yury Luzhkov is a former Mayor of Moscow, a founding member of the United Russia political party and is one of the most prominent and well known post-Soviet politicians in Russia. Luzhkov was appointed to the office of Mayor by then President of the Russian Federation Boris Yeltsin and served a total of 18 years from 1992 and 2010.  Though generally considered a popular mayor, Luzhkov’s career was not without controversy.  Amid accusations of corruption and incompetence in regards to his handling of a variety of situations--including traffic in the city and poor smog conditions during the summer of 2010 - President Dmitry Medvedev fired Luzhkov from his post on September 28, 2010.

In 1958 Luzhkov married Marina Bashilova, a marriage that bore him two sons, Mikhail and Aleksandr.  After 31 years of marriage, in 1989 Marina passed away as a result of liver cancer. Luzhkov met his second wife, Elena Baturina in 1987, while still married to Marina.  After Marina’s passing the two were married in 1991, soon producing two daughters Alyona and Olga.  Baturina herself is a prominent business woman having founded the construction and plastics company Inteco. Baturina is listed as the 279th richest woman in the world and in a country known for extreme wealth amongst its business elite, she is the only female whose net worth is more than a billion U.S. Dollars.

Though hailing from humble beginnings as the son of a carpenter, it has been that Yury Luzhkov was a self made man, choosing a career in engineering and chemicals.  In the 1950’s, Luzhkov studied at the Gubkin Moscow Petrochemical and Gas Industry Institute.  Initially his career began in the Moscow Scientific Research Institute of Plastics, but soon Luzhkov decided that he wanted to combine his skills as a scientist and engineer within a role in the government.  In 1968 Luzhkov joined the Communist party.  Between 1968 and 1980 Yury Luzhkov held various positions within the Chemical Industry Ministry of the Soviet Union. Though a member of the Communist party, Luzhkov was not a member of the ruling elite, and his rise in politics did not transpire until the late 1980’s, close to the collapse of the Soviet Union. 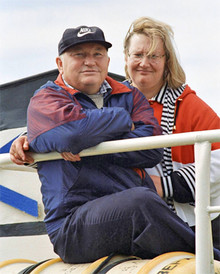 In 1977 Luzhkov was elected to the Mossoviet, a form of city council for the Russian Capital.  Ten years later, in 1987, Luzhkov made the switch to the executive branch of city government, maintaining a position within the Moscow Executive Committee. It was in this capacity, during the waning years of Soviet Communism that Luzhkov worked directly for Boris Yeltsin who was a party boss for the city of Moscow.  In 1991 the Soviet Union was dissolved and Gavriil Popov was appointed to the position of Mayor of Moscow.  Yury Luzhkov was appointed as Popov’s deputy and quickly earned a reputation as a leader running a good portion of the day to day operations in Moscow.  Luzhkov was considered a reformer helping to forge the identity of a brand new Russian Federation.  In 1992 when Gavriil Popov resigned from his post, the newly elected Russian President and former colleague officially appointed Luzhkov as the second Mayor of Moscow—a post that he kept for the next 18 years.  After his initial appointment the long-standing Mayor won re-election in 1996 with an amazing 95% of the vote.  Though his popularity declined throughout the years, Luzhkov was subsequently re-elected in 1999 and 2003, then re-appointed to the position by Vladimir Putin, the country’s President at the time.

During Luzhkov’s tenure, Moscow saw a dramatic increase in construction of residential and commercial buildings as well as major improvements within the city infrastructure.  As the city began to improve and grow, it became clear to Luzhkov that the road systems needed to be improved as well.  Under his direction, city streets were modernized around Moscow to ease the ever increasing traffic.  Moscow’s traffic system relies heavily on a series of ring roads that encircle the city.  Luzhkov heavily invested in revitalizing the outermost ring surrounding the city known as MKAD, adding lights and other safety measures.  One of the major achievements of his term in office was the creation of a third ring road, a major throughway around the city, between the Garden Ring and the MKAD.  Another large public transportation project championed but not realized by the Mayor was the expansion of the Moscow Metro system.  Luzhkov was held in high regard during this period of rapid expansion and modernization in Moscow, but his efforts on the construction front have drawn significant criticism over the years. Many historians and non-governmental organizations claim that Luzhkov is responsible for dismantling many of Russia’s historic buildings and replacing them with structures that are simply inappropriate.  Despite his critics the former Mayor is known as having devout faith in the Russian Orthodox Church, and thus oversaw the reconstruction of the monumental Christ the Savior Cathedral which was destroyed by Stalin’s regime in 1931.

Though it is certainly true Moscow did enjoy an era of rapid expansion while Luzhkov was in office, many feel that his interests weren’t only for the betterment of the city, but rather for his own bank account.  While Luzhkov was responsible for awarding construction contracts throughout the city, his wife’s company, Inteco, was the beneficiary of much of the work.  It is thought that at one point more than 20% of the city’s construction work was given to Inteco.  This perception and the controversial decision to award his wife the contract for the 85,000 seats of Luzhniki Stadium in 1995, brought on varying accusations of corruption for the troubled Mayor.

Though well outside the realm of local politics Yury Luzhkov was banned from Ukraine in 2008 for his assertion that the Crimean city of Sevastopol was really still a part of Russia.  Prior to his statements Luzhkov had personally invested in the infrastructure of Sevastopol.

In 2010 during the 65th anniversary of Victory Day, Luzhkov announced that he would invoke the images of the vilified former leader of the Soviet Union, Joseph Stalin.  Critics say he was trying to revise history by restoring the dictator’s image in a climate when those who remember his reign of terror are starting to die off.  Eventually the celebration was held without images of Stalin. 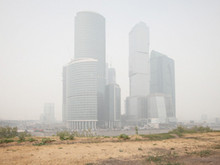 In the immediate months before being relieved of his position, Central Russia was experiencing severe drought conditions and wildfires.  The smoke from the fires, combined with the intense heat covered Moscow in what many called toxic smog.  The poor health conditions in the city gained international attention.  Some reports claim the death toll in Moscow during this heat wave more than doubled.  Luzhkov came under fire for his handling of the situation and for his decision to leave the country during this time.  The Mayor also was in support of a controversial road project through a wooded area in Khimki on the outskirts of Moscow.  Environmentalists and protestors staged a campaign that prompted President Dmitry Medvedev to step in and halt the project.  Even after the project was stopped, Mayor Luzhkov continued to support the idea.  It is believed that Luzhkov was trying to play in the good graces of the current Prime Minister Vladimir Putin, and pit him against Medvedev.  Luzhkov was openly critical of Medvedev publicly declaring that the country needed stronger leadership.

A combination of these controversial stances led to the downfall of Mayor Luzhkov in September of 2010.  Even though Luzhkov had done much to improve the city’s infrastructure, the population had grown too fast, leaving the existing road systems inefficient.  President Medvedev had previously charged Luzhkov with the task of improving Moscow’s legendary traffic problem in short order.  When Medvedev fired Luzhkov he cited the Mayor’s inability to fix the traffic problem, his handling of the smog situation as well as speculation of corruption.  Medvedev declared that there was a loss of trust in Luzhkov as a leader.  The entire incident caused Luzhkov to renounce his membership in the United Russia political party,the group that he is credited with co-founding.  Yury Luzhkov was succeeded as Moscow Mayor temporarily by Vladimir Resin and then officially by Sergey Sobyanin.

No longer outwardly involved in politics, Luzhkov has rehabilitated his family to London for ‘safety reasons’ as he defends his wife’s business empire.  Luzhkov and Baturina continue to claim that her enterprise is completely legitimate, but that fears of blackmail and violence against them and the business prompted them in their decision to move one of Moscow’s richest and most famous power-couples to London.  “There is hatred out there. And if that hatred is all-consuming and the aim is to get at the family then the weakest link in the family is the children. We are afraid to leave them here in Russia," Luzhkov said in an interview with the British newspaper “The Telegraph” in 2012.

One of Moscow’s wealthiest men, Luzhkov is rarely seen living the high-life after years of careful attention to portray him as a man of the people.  History will be the judge of Luzhkov’s contributions to the capital city of Russia, and whether or not he paid too high a price to Moscow closer to Europe, as his critics say.