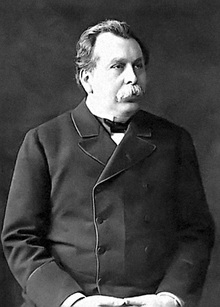 Vyacheslav Plehve was the Head of the tsarist Russian police and later Russian Minister of the Interior. Known for his investigation and elimination of the People’s Will organization that attempted to assassinate the Russian Tsar, Plehve, a monarchist defied all revolutionary movements and cracked down hard on any unrest and rebellions among peasants and students. Nevertheless, he was a dignified statesman of the time, dedicated to his service and his country.

Vyacheslav Plehve was born in April 1846 in Meshchovsk in Kaluga Province into a noble German family that owned an estate in the region. His father was a teacher of geography and history at a local gymnasium, his mother descended from Kaluga’s small gentry. Thus, education was always appreciated in his family. In 1851 his family moved to Warsaw, where Plehve was raised. At the age of 17, he participated in suppressing the Polish uprising in 1863-1864, which revealed his interest to the profession he chose later. His parents sent him to Kaluga to study at a gymnasium, and he graduated with honors. He went on to study law at Moscow’s Imperial University and after finishing his degree in 1867 he began his successful career in court.

Professional Career: Plehve a key figure in the regime’s fight against revolution

Plehve started working as a prosecutor’s assistant in a Moscow district court. For the next 14 years he occupied various positions within the Ministry of Justice. In 1879 he was appointed Attorney General of St. Petersburg’s court and was noticed by Tsar Alexander II for his exceptional diligence and memory. As a conservative statesman in imperial Russia, Vyacheslav Plehve was a key figure in the tsarist regime’s struggle against revolution.

As an experienced prosecutor, he participated in the investigation of the explosion in the Winter Palace in 1880. The following year Plehve was appointed Head of the Police Department of the Ministry of Interior. He was in charge of the imperial police investigation into the assassination of Alexander II. It was during this assignment that Plehve got to know Prince Alexander III, who was impressed by Plehve’s work style and his ability to remember details.

By making his appointments based on skills and not seniority or family background, Plehve enriched his department with young and well-trained specialists. He was known to motivate his staff to give their best effort at work by exploiting their abilities and ambitions. Plehve’s knowledge of human psychology helped him understand people and their objectives after a first conversation.

Department employees spoke highly of his ability to interrogate the most fanatic of revolutionaries and obtain needed information by clever questioning and not by torture. During his time in office Plehve also dealt with a variety of other issues from reforming local governance to providing hunger relief. Nevertheless, he is best known for his crack down on revolutionary movements.

His success in arresting the perpetrators of the murder of Alexander II and destroying the People’s Will terrorist organization led to his appointments as a member of the Governing Senate and as Assistant Minister of the Interior in 1885. Understanding the ineffectiveness of the fight against a “bunch of savages,” he considered it necessary to build a strong opposition to the revolutionary movement which would be “as strong spiritually and serve as moral-religious force reeducating the intelligentsia.” He wanted to achieve this through imposing “severe discipline in all spheres of public life, which are subject to the state control.” 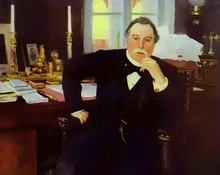 In 1894 he was appointed State Secretary and Head of the Legal Codification Department of the State Council of Russia. In this position he successfully implemented the anti-revolutionary policies of Alexander III and took part in the work of the Special Committee dealing with issues of the nobility.

In 1899 he became the Minister State-Secretary for Finland and held this position for three years. His policies to “russify” the local population provoked mass immigration from Finland. Under his rule, a new military service inscription order was adopted, and Russian became the official language to be used in all state records. Plehve strengthened the Governor’s influence over the Senate’s decisions.

Plehve was an active member of the Russian Assembly, the first nationalistic and monarchist organization in Russia. The Russian Assembly was founded in St. Petersburg in 1900, and its members were intellectuals, clergy, public servants and landowners. The organization represented the idea of an autocratic and indivisible Russia, stressed the leading and important role of the orthodoxy, supported national interests and opposed all liberal and revolutionary movements.

Plehve as Minister of the Interior

In 1902 Plehve accepted the post of Minister of the Interior and also became the Chief of the Gendarme Corps. His colleague, leading specialist of the Gendarme Corps Pavel Savarsin, described Plehve as: “reserved, but clear in his expressions and thoughts, he made an impression as a strong-willed and decent man entirely dedicated to his service. He had a striking look of a tall, older man with grey hair and moustaches, always shaved, with energetic facial features and penetrating eyes, which were always focused on his conversation partner.”

Plehve headed the Ministry at a time when Russia’s internal situation was in difficulty. The economic crisis of 1900-1903 caused mass bankruptcy and unemployment, which sharpened social conflicts. The famine of 1901-1903 worsened the situation for Russian peasants leading to civil unrest. There were numerous student uprisings throughout the country. The Socialist-Revolutionary Party (SRP) emerged out of general dissatisfaction among the population. Terrorism against politicians and rich landowners became a central element of the party’s strategy.

When assuming his post, Plehve sought above all to re-impose order and control. He carried out repressions against opposition movements. With the help of former Moscow police chief Sergei Zubatov, he extended a network of "secret services," which used covert agents to penetrate revolutionary and labor groups. He repressed the liberal press and “zemstvo,” local self-government bodies. This led to bitter clashes among leading public figures and repressions and punitive expeditions against peasant uprisings.

Plehve tried to use the idea of autocracy to ease social tensions. On the one hand, he supported worker’s movements and even encouraged the creation of workers’ organizations. On the other, he denied them the possibility of making any political demands.

The Russian revolutionary and foreign press claimed that Plehve supported Jewish pogroms. However, a study of the secret documents of the Police Department and Ministry of the Interior did not reveal any evidence of this. Nonetheless, the revolutionary parties and Jewish organizations were convinced that Plehve contributed to the Kishinev anti-Jewish pogrom of 1903. Later, it was used as a reason for his assassination. 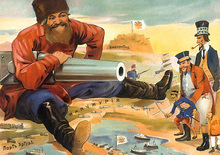 Plehve’s foreign policies backed aggressive ventures that helped provoke the Russian-Japanese War of 1904 - 1905.This conflict grew out of the rival imperialist ambitions of the Russian Empire and the Empire of Japan over Manchuria and Korea. In January 1904, Russian General Alexey Kuropatkin reproached Plehve for instigating the Russian-Japanese war and cooperating with political crooks. Plehve responded: “Alexey Nikolaevich, you don’t know Russia’s internal situation. To avert a revolution, we need a small victorious war.” His quote is often cited as an ironical commentary about the governmental policy of trying to distract people’s attention from the failure of internal politics through an external war.

Plehve was murdered in 1904 in St. Petersburg. He was hit by a bomb near the Warsaw Train Station, while on a trip to Tsarskoye Selo where he reported weekly to Tsar Nicholas II. The plot was orchestrated by the Jewish police agent Evno Azef, and the operation to assassinate the Minister of the Interior was backed by leading members of the Socialist-Revolutionary Party. It was named “Campaign Against Plehve” and consisted of several other unsuccessful assassination attempts. On 28 July SRP-member Sozonov threw a bomb at Plehve’s carriage as it was passing by. In case he missed the carriage, he was followed by two other accomplices. Plehve was murdered instantly. Sozonov was imprisoned and later wrote in his memoirs that on that day he prayed that his victim would not survive.

For his work Vyacheslav Plehve was awarded many Russian orders of the highest rank including the Order of the Saint Aleksandr Nevsky.