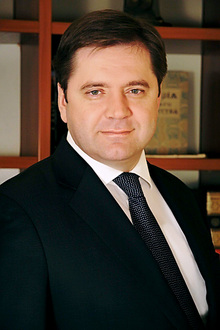 Russian Energy Minister, Head of the CIS Electric Energy Council and Transneft Board of Directors and one of the key figures in the Russian atomic energy industry, Sergey Shmatko enjoys probably one of the most surprising careers among the Russian elite.

Sergey Shmatko was born in Stavropol into a family of a military man. His father Ivan Dmitrievitch was a flight officer and is now a retired wing commander. His mother, Valentina Slyadneva, is a poetess and a novelist, and the current chairman of the Stavropol regional branch of the Literary Fund of the Russian Federation. Sergey has a sister, Larisa, who is a lawyer. The family moved from place to place as his father changed duty stations and as a child Sergey Shmatko lived in different places in the Urals, including Sverdlovsk, Chelyabinsk Region, and even spent two years in the Federal Republic of Germany - a great opportunity for him to learn German in a native-speaking country.

Sergey finished school while living in Sverdlovsk in 1983 and after that entered the Faculty of Mechanics and Mathematics of the Ural State University. However, two years later he was drafted into military service and served in the nuclear-powered submarine forces of the Northern Fleet until 1988. That service is sometimes called the starting point of his “atomic” career, as later he would head Atomstroyexport, one of the key enterprises in atomic energy construction, covering more than 20% of the world market.

After his discharge Shmatko decided to change his professional course, transferring to the Faculty of Political Economy at the same University and allegedly graduating in 1991. By that time he had already become one of the best students in his year and was sent with 14 others to the Federal Republic of Germany to continue his studies at the Faculty of Economics at Marburg University. Some media report that according to his mother, Sergey Shmatko never graduated from the Ural State University because of that transfer. Nonetheless, his academic diligence and success in Germany is said to have been “beyond compare” and in 1992 he defended his diploma work in German.

After finishing his studies in Marburg, Shmatko stayed in Germany to build his career. In 1992 he found job at BDO Binder (Frankfurt-am-Main) as an auditor. In 1994 he became Director of RFI GmbH, a consulting company working with investments to Russia. RFI GmbH actively cooperated with the Russian Foundation for Basic Research, a self-governing non-commercial government organization created in 1992 to provide support to research work in all areas of fundamental science on a competitive basis, and officially represented it in the EU. As an investment consultant he frequently visited his homeland, taking part in the evaluation of Russia’s enterprises along with German specialists.

In 1995—1997 he was a research associate of the non-governmental Institute for Investment Problems and also headed the Department of External Affairs at the All-Russia Bank for Regions’ Development (a bank with government participation at the federal level created in September 1995).

In 1997 Shmatko began his career in the atomic energy sphere – he moved to Rosenergoatom Concern, Russia’s nuclear power plant operating company, where he headed an analytical center of economic strategy until 1999.

That same year he became the general director’s aide on economic strategy in the All-Russia Research Institute for the Operation of Nuclear Power Plants.

From 2002 to 2005 Sergey Shmatko was Chairman of the Sate Conversion Fund, which was created in 1995 to assist the government policy of reforming and developing Russia’s military industrial complex, in particular the conversion of defense industry enterprises into commercial ones. While at this position, in 2004, Shmatko graduated from the Higher Academic Courses of the Joint Staff Military Academy of the Russian Federation Armed Forces as a specialist in “Russian Federation defense and security.” 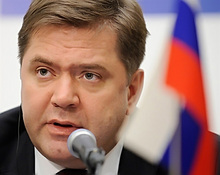 Under Sergey Shmatko’s leadership Atomstroyexport made great achievements in promoting Russia’s atomic technologies in foreign markets. The company actively developed international cooperation, including projects in China, India, Bulgaria and Iran. In 2007 the company constructed seven projects at the same time, outdoing all other competitors, including Westinghouse Electric Company LLC, General Electric and AREVA Group. Negotiations were conducted with Vietnam, Malaysia, Egypt, Namibia, Morocco, the South African Republic, Brazil, Algeria, Chile and Argentina. Foreign media said that Shmatko’s company became the Kremlin’s main instrument for satisfying developing countries’ demands for construction of NPPs, noting that Atomstroyexport did not shy at dealing even with governments avoided by other nuclear construction companies. By this they meant the company’s project in Bushehr, Iran, which was at the center of an international conflict over Iran’s nuclear program.

At the beginning of 2008 it became clear that Russia’s Ministry of Industry and Energy would be divided into two separate ministries. However, Sergey Shmatko’s name was never heard among possible candidates for the post of Minister of Energy. When in May 2008 he received that position in the Cabinet headed by Russia’s former president Vladimir Putin, Shmatko himself says it was a great surprise. Experts believe that this appointment showed a shift in Russia’ energy values and priorities. Rosatom Head Sergey Kirienko even said that it marked the beginning of an “atomic renaissance” with more than 64 bln dollars to be invested in the industry until 2020.

Having reached the height of his career, Shmatko was not confined to his ministerial post. He has already replaced Viktor Khristenko on the boards of directors of Transneft and Gazprom and Anatoly Chubais as the president of the CIS Electric Energy Council.

After the liquidation of the RAO UES of Russia in July 2008, the situation in the Russian energy sector became the full responsibility of Sergey Shmatko and his Ministry. It is said that after taking his office in the Cabinet, Shmatko had to cut his sleeping to only 3-4 hours a day. The functionary himself admits that the workload in the Cabinet is great and he cannot have a holiday, but says it is an interesting job.

Shmatko is married and has two children, a son Artemy and a daughter Polina.