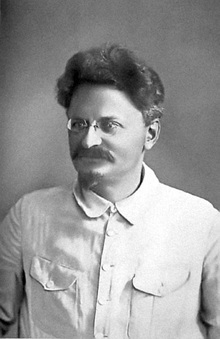 Described as a stirring public speaker, an efficient administrator and an untiring worker, Leon Trotsky arouses strong passions among historians. A figure loved by some and hated by others, he was one of the leaders of Russia’s October Revolution in 1917 and later the founder and commander of the Red Army. But after leading a failed struggle against the rise and policies of Joseph Stalin, he was removed from power and exiled. Trotsky remained the key figure of an anti-Stalinist opposition abroad until his assassination in Mexico by a Soviet agent.

Trotsky was born Lev Davidovich Bronstein on 7 November 1879 in the small village of Yanovka, then part of the Russian Empire and now southern Ukraine. He was the fifth child of a hard-working, well-off Jewish farmer. When Lev was about nine, his father sent him to school in the bustling port of Odessa where he proved an exceptionally bright and capable student. In 1896 Lev moved to the city of Nikolayev to complete his schooling. Here he was drawn into an underground Socialist circle and was introduced to Marxism. He helped to set up the underground South Russia Workers’ Union.

In January 1898 more than 200 of the union’s members, including Trotsky, were arrested. Trotsky spent the next two years in prison awaiting trial and was eventually sentenced to four years of Siberian exile. While in prison, he married fellow Marxist Aleksandra Sokolovskaya who gave birth to their two daughters in Siberia.

In the summer of 1902 he escaped with a forged passport bearing the name Trotsky, which he adopted as his revolutionary pseudonym. He later said the name was that of a prison guard in Odessa. His wife remained behind, and the separation became permanent. Trotsky made his way to London, where he joined a group of Russian Social-Democrats working with Vladimir Lenin on the revolutionary newspaper Iskra (“The Spark”), soon becoming one of its leading authors. That same year Trotsky met and later married Natalia Sedova who became his devoted companion until death. They had two sons together.

Upon the outbreak of revolutionary disturbances in 1905, Trotsky secretly returned to Russia’s then capital St. Petersburg. He became a leading spokesman of a revolutionary organization representing the city’s workers - the St. Petersburg Soviet (Council) of Workers’ Deputies. But a year later Trotsky and the other Council leaders were arrested and tried. Sentenced to deportation in 1907 he escaped on his way to Siberia. He settled in Vienna, earning his living as a correspondent in the Balkan Wars of 1912-13. At the start of World War I, he was forced to flee to avoid arrest as a Russian émigré. He moved to Switzerland and then to Paris but his anti-war stance led to his expulsion from France and later Spain. In January 1917 he reached New York City where he first received news of the 1917 February Revolution that overthrew Tsar Nicholas II. Trotsky made his way back to St. Petersburg, renamed Petrograd.

Despite previous disagreements with Lenin, he joined the Bolshevik Party, of which Lenin was the uncontested leader. Trotsky went on to play a decisive role in the Bolshevik seizure of power known as the October Revolution of 1917 and before the year was out became the second man in the party after Lenin. His first position in the new government was as the People’s Commissar for Foreign Affairs. 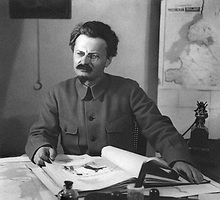 Trotsky quickly found himself negotiating peace terms with Germany to pull Russia out of World War I. Although admitting that the exhausted and outdated Russian military couldn’t fight, he refused to accept Germany’s harsh peace terms. When, under Lenin’s pressure, the peace treaty was eventually signed in March 1918, Trotsky resigned but was immediately made Commissar of War. He took on the daunting charge of building a new Red Army. His methods of forced conscription and compulsory obedience prompted much criticism and resistance by rival party leaders, notably Joseph Stalin. But his approach paid off and by 1922 the Red Army had largely emerged victorious from the bitter Civil War.

During the Civil War Trotsky further secured his position as the number-two man next to Lenin. He was one of the initial five members of the Politburo – the top Communist Party policy-making body created in 1919. Trotsky exceeded Lenin in intellectual power and administrative effectiveness, but his arrogance made him few friends and he found it hard to secure party decisions. Years later he was accused of unjustified incarcerations and executions of political opponents and fiercely criticized for giving the orders to suppress the last major revolt against the Bolshevik rule - the Kronstadt Rebellion.

Meanwhile Lenin’s health deteriorated and the question of his succession became urgent. Trotsky saw himself as Lenin’s heir apparent but some of his powerful party colleagues jointly conspired against him. In December 1922 a partially recovered Lenin warned in his then secret “Testament” of the danger of a split between Trotsky and Stalin, describing Trotsky as a man of exceptional abilities but with a disproportionate amount of self-confidence. In the midst of the power struggle Trotsky fell ill and become increasingly isolated. When Lenin died in March 1923, Trotsky, recovering on the Black Sea coast, was deceived about the date of the funeral and failed to return to Moscow in time, allowing himself to be easily outmaneuvered by Stalin.

In the years that followed, Trotsky was removed from the war commissariat, expelled from the Politburo and finally thrown out of the Party. In 1928 Trotsky and his principal followers were exiled to remote parts of the Soviet Union. A year later he was banished from the USSR altogether. Trotsky was initially received by Turkey where he completed his autobiography and his history of the Russian Revolution. In 1933 he moved to France, then to Norway and finally sought asylum in Mexico, where he settled at Coyoacán. 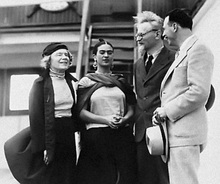 At one point he lived at the home of the painter Diego Rivera (who depicted him in several of his works) and had an affair with Rivera’s wife and fellow painter, Frida Kahlo. Meanwhile back in the Soviet Union he was represented as the principal conspirator, in absentia, in the show trials of former Communist opposition leaders held in Moscow in 1936-38.

Trotsky became the object of two assassination attempts by Stalinist agents; the first, a machine-gun attack on his house, failed, the second, by Ramón Mercader, a Spanish Communist who had won the confidence of the Trotsky household, was successful. Trotsky was severely injured by an ice pick and died in hospital at the age of 60. For five days his body lay in state. Some 300,000 people filed past the coffin while in the USSR the news was only briefly mentioned.

Trotsky was one of the few Soviet political figures who were never formally rehabilitated by the Soviet administration. Yet in 1987 under Mikhail Gorbachev, Trotsky was called a hero and martyr, and was featured on a commemorative postage stamp. Trotsky’s death and his love affair with Frida Kahlo have been represented in several major movies and plays; Trotsky also proved an inspiration for several fictional book characters.