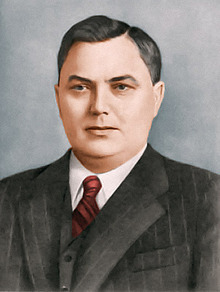 A Soviet politician and close associate of Stalin, Malenkov was the virtual head of the USSR in 1953-1955.

Georgy Malenkov was born in Orenburg, in the Russian Empire. In 1919 he voluntarily joined the Red Army and was a political worker of the military forces. In a year Malenkov joined the Communist Party and soon became an active functionary. From 1920 Georgy Malenkov studied electrotechnics in the Bauman Moscow State Technical University and headed the commission for the exposure of students who supported the ideas of Leon Trotsky, whose politics sharply differed from Stalinism. Almost all of these students became victims of repressions and many were killed.

In 1925, having received an opportunity to become a clerk in one of the departments of the Communist Party, Georgy Malenkov quit his studies and focused on his political career. His diligent work was noticed by higher authorities and in 1930 Malenkov was appointed the head of the organizational department of the Moscow Committee of the Communist Party and took part in a purge of the corresponding committee of the opposition. In 1934 Georgy Malenkov was promoted by Stalin and under his command he took part in a mass campaign of inspection and repression of many communist officials. The infamous head of the Soviet Secret Police (NKVD), Nikolay Ezhov, recommended Malenkov for the post of his deputy. Together with Ezhov, Georgy Malenkov personally visited a number of regions (Armenia, Belarus, Georgia, Tajikistan and others) to 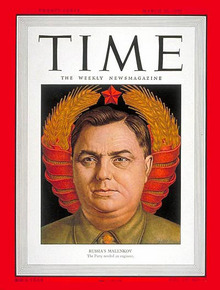 expose and arrest “enemies of the people” and took part in interrogations. Later on, in 1938, he was involved in Ezhov’s dismissal from his post. The new NKVD head, Lavrenty Beria, was responsible for many of the millions of imprisonments and killings during the Great Purge. Malenkov established a good relationship with Beria, which saved him from arrest as a former supporter of Nikolay Ezhov.

During the Great Patriotic War (the period of the USSR’s participation in World War II), Georgy Malenkov was a member of the State Defense Committee. He visited many key sectors of the Soviet-German front (Leningrad, Moscow, Stalingrad). He also held the post of the Commissar of Aircraft Production and played an important role in providing the Soviet Army with combat aircraft. In 1943 Malenkov obtained the military rank of Lieutenant General.

In 1943-1945 Georgy Malenkov headed the committee for the restoration of the national economy in the regions that were liberated from German occupation. From 1944 he also held the post of Deputy Chairman of the Council of the People’s Commissars (Sovnarkom), which was the highest government authority of the USSR. That same year Malenkov, following Stalin’s directive, gave a speech regarding the necessity “to increase vigilance” of Jewish staff, following which Jewish nationals had difficulties in gaining high posts.

In 1946 Josef Stalin started a new wave of purges of political and military staff. Georgy Malenkov was accused of inefficient work during the Great Patriotic War and the production of poor-quality aircraft. He was thus dismissed from his high posts. According to some sources, Stalin didn’t lose his trust in Malenkov, but only wanted to show “who was the master.” Though soon after this Lavrenty Beria started a campaign to reinstate Georgy Malenkov, and the latter received his posts back. He virtually became the second highest ranking person in the Communist Party, in charge of millions of party functionaries.

In 1949-1952 Georgy Malenkov played one of the main roles in the Leningrad Case, a series of criminal cases fabricated in order to accuse a number of prominent members of the

Communist Party of the USSR of treason and the intention to form an anti-Soviet organization. Malenkov personally led the investigations and took part in unlawful questionings that included torture and beatings. He was also actively involved in the case of the Jewish Anti-Fascist Committee, when more than a hundred people were arrested, many of who were later killed. On the infamous “Night of the Murdered Poets” on 12 August 1952 at least thirteen prominent Yiddish writers were executed as part of the extensive anti-Jewish campaign.

During the last years of Josef Stalin’s life Malenkov was one of his closest supporters. After the death of Stalin in 1953, Georgy Malenkov became the Chairman of the Council of Ministers of the USSR, which made him the ruler of the country. He held this post for two years and managed to implement a number of changes and reforms.

Only a few weeks after Stalin’s death, during a closed session of the Presidium of the Central Committee of the Communist Party, Malenkov announced the necessity to “put an end to the personality cult and start a collective leadership of the country.” He refused to receive support from Lavrenty Beria. Instead Beria was later arrested and executed by firing squad. Georgy Malenkov’s role in the removal of Lavrenty Beria is reported in different ways: he either initiated the execution or just allowed it to happen.

Malenkov’s short reign is remembered for his initiation of several reforms, one of which was the release and rehabilitation of political prisoners. He cancelled additional payments to high political officials and increased the wages of lower workers. This action put top politicians against him. Nikita Khrushchev, who Malenkov originally put in charge of the party apparatus, used the money of the Central Committee to pay back all subsidies, cut off by the head of the country. This action, apparently, gave Khrushchev strong support from high officials.

Georgy Malenkov made an attempt to improve agriculture by increasing purchasing prices and reducing taxes. Interestingly, a folk saying appeared during that time: “when Malenkov came – we ate some pancakes.” As the leader of the USSR, he also gave passports to villagers, who since 1932 had been prohibited from leaving their villages. Unfortunately, this reform was not completed.

Georgy Malenkov’s popularity among the people also grew because of his suggestion to increase the output of consumer goods at the expense of heavy production. He expressed his disapproval concerning nuclear armament, stating that it could lead to global destruction.

But, evidently, Malenkov could not prevent the strengthening of the party apparatus, which allowed Nikita Khrushchev to organize a “palace coup.” In February 1955 Georgy Malenkov was forced to resign. Khrushchev, who two years earlier created and took the post of First Secretary of the Communist Party of the USSR, became the head of the country.

In 1957 Georgy Malenkov, together with Bulganin, Molotov and Kaganovich made a failed attempt to depose Khrushchev. Malenkov was exiled within the Soviet Union, becoming the head of a hydroelectric plant in Kazakhstan. A few years later he was expelled from the Communist Party. Despite several appeals to become a member of the party again, Georgy Malenkov was never reinstated.

Georgy Malenkov died in 1988. His death was not reported in the Soviet press. Malenkov was one of only a few important members from Stalin’s close circle who died from natural causes.

He was married to Valeria Malenkov, and had three children.