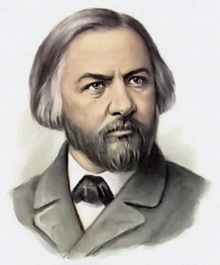 Mikhail Glinka was the founder of the nationalist school of Russian composers and is often regarded as the father of Russian classical music. Glinka's compositions were an important influence on future Russian composers, notably the members of the Mighty Five, who took Glinka's lead and produced a distinctive Russian style of music.

Mikhail Glinka was born in 1804 in the village of Novospasskoye, not far from the Desna River, in Smolensk Province in the Russian Empire. His father was a wealthy retired army captain, intelligent and homely; he was busy laying out and modernizing his park so the boy was brought up by his grandmother (his father’s mother) – an autocratic woman, a “thunderbolt” of bondsmen and the whole family.

Mikhail was a feeble, nervous, weak child, manipulated by his grandmother until she died when he was six years old. After that, Glinka was moved to his maternal uncle’s estate 10 kilometers away from home, and once, quite by accident, heard his uncle’s orchestra, whose repertoire included Haydn, Mozart and Beethoven. Music produced such an indelible impression upon Glinka that he asked to be taught music along with the lessons of Russian, German, French and geography that his governess was in charge of. The future musician was especially charmed by the sounds of the violin and the flute, and in his uncle’s orchestra he played these very instruments. His first violin teacher was a bondsman from Smolensk.

At the age of 13 Glinka was sent to the then capital, Saint Petersburg, to study at a school for children of the nobility. He took piano, violin and voice lessons from the Italian, German, and Austrian teachers there. 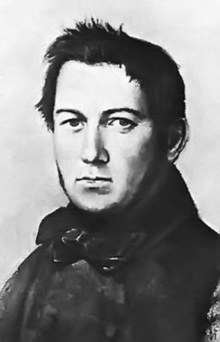 When Mikhail left school his father wanted him to join the Foreign Office, and the young man was appointed assistant secretary of the Department of Public Highways (a post he held for four years – from 1824 to 1928). Glinka did not particularly like civil service, at the age of 19 he had already decided to dedicate his life to music, but at the beginning of the 19th century the profession of a musician was considered at best odd and at worst disgraceful among representatives of the nobility. Thus Mikhail gave in to his father’s demands. The work was not tough, which granted Glinka much free time, which he spent frequenting drawing rooms and socializing in the cultural circles of the city. At this time Glinka started composing music; he focused on romances that entertained rich amateurs.

In 1830 Glinka decided to travel to Italy with the tenor Nikolay Ivanov. In Milan he took lessons at the conservatory with Francesco Basili (the famous Italian composer and conductor). Glinka spent three years in Italy listening to trendy music, gallanting women and meeting famous people including Mendelssohn and Berlioz. The country charmed the young composer - after evenings spent listening to new operas, he returned home and recalled the music and arias he had heard. Glinka continued to work hard on new compositions which were no longer immature and imitative, but self-contained and formed. During this period Glinka concentrated on writing pieces on the theme of famous operas; he also paid special attention to instrumental ensembles and wrote two eccentric compositions – a sestet for piano, two violins, viola, cello and contrabass and a pathetical trio for piano, clarinet and fagotto. These musical compositions are considered to best illustrate the unique composition “signature” of Mikhail Glinka.

His return journey took him through the Alps; he stopped for a while in Vienna, where he heard the music of Franz Liszt. Glinka spent the next five months in Berlin - during this time he studied composition under the guidance of Siegfried Dehn (the great German music theorist, editor, teacher and librarian).

In 1834 the sad news of his father’s death reached Glinka, who collected his gear and hastily left Berlin and returned to his native village of Novospasskoye.

When Glinka returned to Russia he immediately started writing a new opera. He knew neither the plot, nor the words, but felt a desperate desire to work. Moreover, the composer wished to create a truly Russian opera. But the future opera did not hold Glinka in play for long – he was a frequent guest in the living room of Vasily Zhukovsky – one of the best known Russian poets of the 1810s, who assembled the crème-de-la-crème of literary and musical society – Pushkin, Gogol, Pletnev. When Glinka voiced his desire to start writing opera he was encouraged by Zhukovsky who offered him the story of Ivan Susanin, and the musician gladly agreed. Set in 1612, it told the story of the Russian peasant and hero Ivan Susanin who sacrificed his life for the Tsar by leading astray a group of marauding Poles who were hunting him. Glinka especially loved the scene in the woods; he believed it was very characteristic and unique of the Russian people. 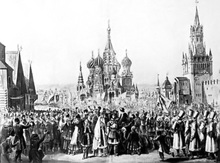 The opera was finished, but unfortunately the Saint Petersburg Theater at first refused to stage it. Finally, an agreement was reached: the opera was staged, but under several conditions which the composer could not ignore. For one thing, the original name of the opera was changed, and the composition was titled “Life for the Tsar.” Glinka was also obliged to refuse all the royalties.

In the opera, Mikhail Glinka wanted to glorify a plain peasant, the greatness of the Russian national character, his courage and unmistakable stamina. The composition thus became the first Russian opera that was written totally without speaking dialogues; and for the first time in Russian musical history the peasant acted not as a common character, bur as a heroic personality.

The premier took place in autumn 1836 and was a huge success; the Tsar himself thanked Glinka in person and blessed him after the opera ended.

In 1837, Glinka was installed as the instructor of the Imperial Chapel Choir. In 1838, at the suggestion of the Tsar, he went to Ukraine to gather new voices for the choir; as a result 19 boys joined the choir.

After the success of “Life for the Tsar” (originally entitled “Ivan Susanin”) Glinka started dreaming about another opera, “Ruslan and Lyudmila.” He hung his hat on Puskin’s help, but the latter was killed in a duel. The premier of this opera took place in autumn of 1842, on the very same day as “Ivan Susanin” but some six years later. The opera was poorly received and drew much criticism; it was attacked by Faddey Bulgarin, a very influential journalist at the time. The general public did not like the opera much either; and His Majesty Emperor Nicholas I left in an emphatic manner before the opera actually finished. The opera was declared a failure, the artists were upset their mastery was left unnoticed, and finally a year later, in 1846, the unfortunate composition was withdrawn from the repertoire. The criticism was a real blow to Glinka, who set off on a trip to France and Spain in order to wade his cares away.

The opera was staged only again 13 years later after Glinka’s death. 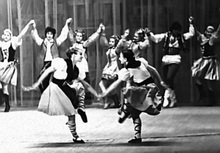 The trip helped. In 1845 Glinka wrote the overture “Aragonskaya Hota,” which got across the footlights. After another success Glinka decided to take a break and dedicated all his time to the study of Spanish folk music. Only in 1848, having returned to Russia, did Glinka write another opera in the Spanish style and character - “A Night in Madrid.”

When traveling, Glinka felt homesick, which inspired him to write the famous “Kamarinskaya” – this symphonic fantasy was a new dawn in Russian music.

After returning to Russia Glinka lived in Saint Petersburg, Warsaw, Berlin and Paris by turns. The composer had many plans and dreams, but the atmosphere of enmity and persecution didn’t let the composer write music in peace.

His closest friend in his last difficult years was his beloved sister Lyudmila Shestakova; and Glinka even composed several piano plays for her small daughter Olga.

Glinka died on 15 February 1857 in Berlin after he had caught cold several days before. He was buried in Berlin but a few months later his body was taken to Saint Petersburg and reentered in the cemetery of the Alexander Nevsky Monastery.

In 1835 Glinka married. His young wife, Maria Ivanova, was the musician’s distant relative, a decent and economical lady; she had only one vice which her husband considered minor – she knew nothing about music and showed little interest in his art.

The marriage was short-lived, as Maria changed greatly after the first ideal year of family life; instead of being careful to the limit she started misspending money, dressing dowdily and paying as little attention to Glinka as possible. Although his initial fondness of her was believed to have inspired the trio in the first act of the opera “A Life for the Tsar,” or “Zhizn za Tsarya” in Russian (1836), he could not stand the constant nagging of his wife and her mother. Glinka remembered his wife flirting with men, being rude to him and spending more money than the family could actually afford.

Glinka soon learnt that Maria was unfaithful to him and tried to spend as little time at home as possible. In spring 1839 during one of the evenings Glinka enjoyed at his sister’s place he first saw Ekaterina Kern – “a pale tall young lady with wonderful eloquent eyes and charm” as the composer recalled later. On that very day Glinka confessed his love. The young lady felt flattered but said nothing.

In autumn 1839 Glinka was told by several of his acquaintances about his wife’s unfaithfulness; the shame was so intolerable he left home and never returned. After leaving the place that was his home of many years, Glinka spent some time at his friend’s; immediately he wrote a letter to Maria telling her he wanted to a divorce and warning that his decision was final, and tears, prayers and persuasions could not make him change his mind. However, Maria did not feel lonely for too long and soon remarried.

A month later Glinka collected all his personal belongings and the piano and handed in his resignation; despite the endless attempts of his friends and acquaintances to reconcile him with his wife, Glinka preferred to never again deal with the woman. 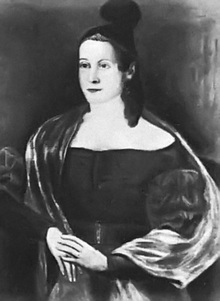 At the first opportunity Glinka moved to his sister’s where he could from time to time see his beloved Ekaterina Kern; in 1840 he even dedicated a waltz to her. His love for the young lady was so great that Glinka even planned to go abroad accompanied by Ekaterina without actually getting the divorce from his first wife. In August 1840 Glinka finally set off; Ekaterina Kern together with her mother went in the same direction – the couple decided that the fact they traveled separately would spark off less rumors. However, during the journey Glinka’s feelings started to die away. He blamed himself, but nevertheless the trip was terminated and they parted.

In 1884 Mitrofan Belyayev (a Russian music publisher and an outstanding philanthropist) founded the annual "Glinka Prize.”

Outside Russia several of Glinka's orchestral works have been fairly popular in concerts and recordings.

Soviet astronomer Lyudmila Chernykh named a minor planet “2205 Glinka” in his honor. It was discovered in 1973.