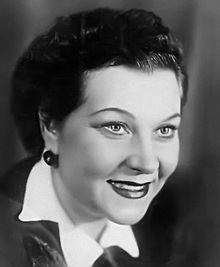 A famous Soviet singer and film and theater actress, Klavdia Shulzhenko was a legendary and symbolic figure, as well as a warm-hearted person, greatly loved by the common people of the Soviet Union.

Klavdia Shulzhenko was born in Kharkov, Ukraine (which at that time was part of the Russian Empire). Her father, an accountant of the Central Railroad Administration, had very good music skills, playing wind instruments and masterfully performing at amateur concerts.

From the end of the 1920s Shulzhenko started performing folk songs. Despite her wonderful vocal skills, she was not interested in their further development and dreamed of a career as an actress. Still, thanks to her parents, who encouraged Klavdia to study music, she had lessons with Nikita Chemizov, a professor of the Kharkov Conservatoire.

In 1923 Klavdia Shulzhenko, at only 17 years old, was accepted to the 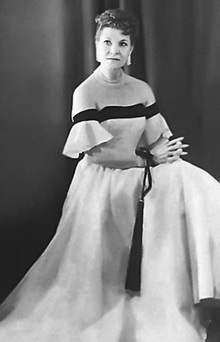 Kharkov Ukrainian Drama Theater, led by Nikolay Sinelnikov. The theater was widely known as one of the most interesting outside of Moscow and St. Petersburg, with good direction and a proper repertoire. Shulzhenko’s work in the theater gave her a good training in acting. That same year, she debuted as a singer and performed in a romance-themed play.

In a few years’ time Shulzhenko became an actress of the Kharkov Krasnozavodsky Drama Theater. Meanwhile, her singing talent became increasingly well known. She performed at local concerts and on local bandstands. The songs “A Mine Number Three” and “The Song About Brickworks” were especially popular among working people, who soon would become Shulzhenko’s biggest fans.

A successful performance on the stage of the Mariinsky Theatre in Leningrad (now Saint Petersburg) in 1928 can be considered as a turning point in Klavdia Shulzhenko’s career. Having presented two planned songs, Shulzhenko was encored four more times. Her debut in the Moscow Music Hall followed shortly after that. Klavdia Shulzhenko was noticed by the “rival” Leningrad Music Hall and soon she joined the theater. In 1931 Shulzhenko, together with the outstanding Leonid Utesov, acted in the play “Conditionally Killed.” The music for the performance was written by the composer Dmitry Shostakovich and conducted by Isaak Dunaevsky.

In 1927 the composer Yuly Meitus wrote, specifically for Shulzhenko, the songs “Red Poppy,” “Red Army” and “Grenada.” These new compositions, among many others, quickly became popular. Klavdia was very careful with her repertoire, choosing only those songs that, in her opinion, were the most natural for her individuality and vocal skills. Music critics often remarked on the excessive “sensitivity” of the singer’s manner, but this particular feature made her well-known and loved by ordinary people. Shulzhenko’s lyrical songs “Friendship,” “Portrait” and “A Note” tell about the common feelings of her contemporaries. Even Spanish and Latin American compositions, such as “Chelita” and “Plain Girl,” sounded like stories about the singer’s peers. 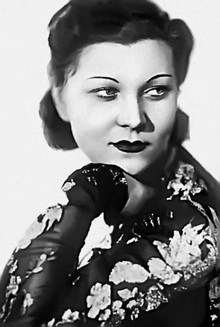 Shulzhenko herself looked like a real Slavic girl, whose image was close to all people: short fair curls and a friendly smiling face.

Klavdia Shulzhenko became known as a film actress as well: in 1934 she played one of the characters in Mikhail Averbakh’s picture “Who Is Your Friend?” In 1936 Shulzhenko made her first gramophone recordings.

From 1937 she worked with the jazz band of Yakov Skomorovsky and performed a range of songs of different character and genre, including “Hands” by the poet Vasily Lebedev-Kumach, “Mother” by Modest Tabachnikov and a jazz-interpretation of the famous composition “Cart” amongst others.

In 1940 Klavdia Shulzhenko and her husband Vladimir Koralli, whom she married in 1929, formed a jazz band that became very popular and existed for almost five years. Their repertoire had quite a few humorous songs including “Don’t Talk About Love,” “Stubborn Bear” and “Snub-nosed.”

From the very beginning of the USSR’s participation in World War II, Shulzhenko and her husband voluntarily joined the army and as a jazz band they started performing for the soldiers of the Leningrad Front, right on the 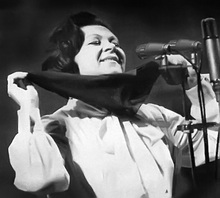 front line. During the Siege of Leningrad Shulzhenko gave more than 500 concerts. She became famous nationwide thanks to her songs “The Blue Headscarf,” “Let’s Smoke” and “Companions in Arms.”

“The Blue Headscarf” became a legendary composition, a symbol of the war years. The music was written by the Polish composer Ezhi Peterburgsky. There were several variants of the lyrics, one of which appeared right after the beginning of the war. At the end of 1941 Klavdia Shulzhenko met lieutenant Mikhail Maximov, who wrote his version of the words. Shulzhenko’s performance of the new composition had great success, and in 1943 the song was recorded in Moscow. All of its copies were sent to the fighting line. At the most difficult moments of the struggle, soldiers were encouraged not only by solemn patriotic hymns, but also by a lyrical “The Blue Headscarf,” which reminded them about their beloved, who were waiting for them at home and who they needed to protect from enemies.

In July 1942, at the 500th concert of the jazz band, Klavdia Shulzhenko was awarded the medal “For the Defense of Leningrad.” The group kept performing concerts until the end of the war. As the vocalist of the band, Shulzhenko was awarded with the highest military sign of recognition – the Order of the Red Star and soon she was also given the title of Honored Artist of the Russian Soviet Republic. 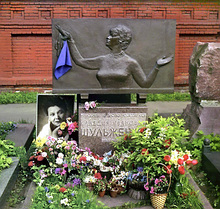 After the war Klavdia Shulzhenko continued her singing career, mainly performing solo. From 1950 she collaborated with the famous composer Isaak Dunaevsky, who wrote for her the songs “Mother’s Letter,” “School Waltz” and “A Word That Lends You Wings.” In 1954 she released her first long-playing record and the same year she played a role in the film “Joyful Stars” directed by Vera Stroevaya.

Klavdia Shulzhenko and Vladimir Koralli divorced in 1954. In two years Shulzhenko met a famous cameraman, Georgy Epifanov, who by that time had been in love with her for over 16 years. They got married, which attracted much public attention to the couple: Epifanov was twelve years younger than his famous wife. Despite all the gossip, they were very happy together.

From 1960 Klavdia Shulzhenko performed mainly songs from her war repertoire and left aside those compositions that, in her opinion, were not appropriate for her age. In 1965 Shulzhenko took part in the First Festival of the Soviet Popular Song and in two years she became a member of the festival jury.

In 1971 Shulzhenko was awarded the title of the People’s Artist of the USSR. In a few years’ time she put an end to her solo programs and mainly performed in variety concerts. One of the most popular of her songs at the time was “Waltz About a Waltz” by Eduard Kolmanovsky and Evgeny Evtushenko.

In 1980 the last long-playing record of Shulzhenko’s songs was produced, entitled “The Portrait” and a later year her memoirs were published.

A famous performer, Klavdia Shulzhenko died in 1984 in Moscow. At the Novodevichy Cemetery, next to the monument of the great singer, there always lies a blue headscarf.